This lovely muddy green-gray background color is an approximation of the shade of paint that the Israeli S-199s sported upon arrival in Israel.

What was that color? That's a simple question without a simple answer. The pilots I have interviewed claim that the S-199s were painted a greenish gray. Giddy Lichtman called it "an OD (olive drab) gray". Most sources have, in the light of Luftwaffe practices, interpreted this colour to RLM 02, a flat greenish gray paint used as primer and in camouflage patterns by the Luftwaffe (see this Me 109G6 with RLM 02 primer). Until recently, I thought this color choice seemed unequivocally accurate, and in fact the background of these pages is based directly on RLM 02. (As viewed on my Adobe Photoshop color-corrected monitor, the RGB color values are R:170, G:179, B:134.)

Some people have suggested the S-199s were painted in other colors. Some contend it may have been RLM 68, which was a zinc chromate green also used as a Luftwaffe primer. I don't think this is accurate as all S-199 pictures show a lighter shade. Fewer have claimed the color to be RLM 99, but this was a yellow-green and seems even more unlikely to have been the color in question.

Other, less technical guesses at the proper paint color include an undetermined dark gray, a typical dark green similar to the Czechoslovakian Air Force S-199s. 101 Squadron's Sid Antin is "almost sure at least the tops of them were solid green." 101 Squadron pilot Leo Nomis's has famously asserted that these aircraft were painted "solid pale tan with light blue under surfaces" (Nomis and Cull 1998), a paint scheme that was duplicated on the dust cover of his book. No one else can recall two-tone S-199s, although one set of pictures may show evidence of this. 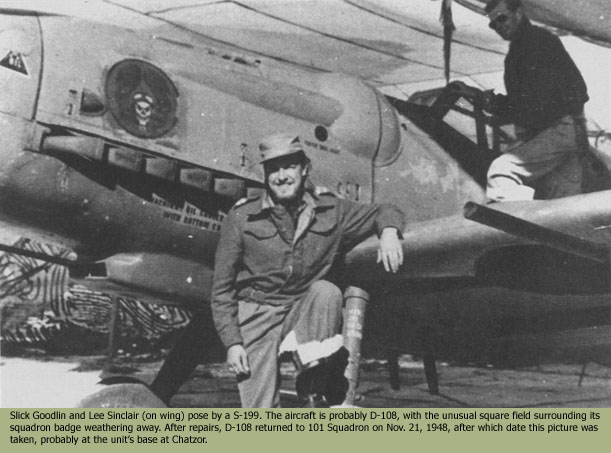 Look at the picture above. See the warning printed beneath the exhaust stack? The color that lies beneath the warning is lighter than the color surrounding it. For this discussion, let's call the lighter color A and the darker color B. A is presumably the same color as the rest of the plane (with the exception of small details like the badge, the cover next to it, etc.). So what is B? 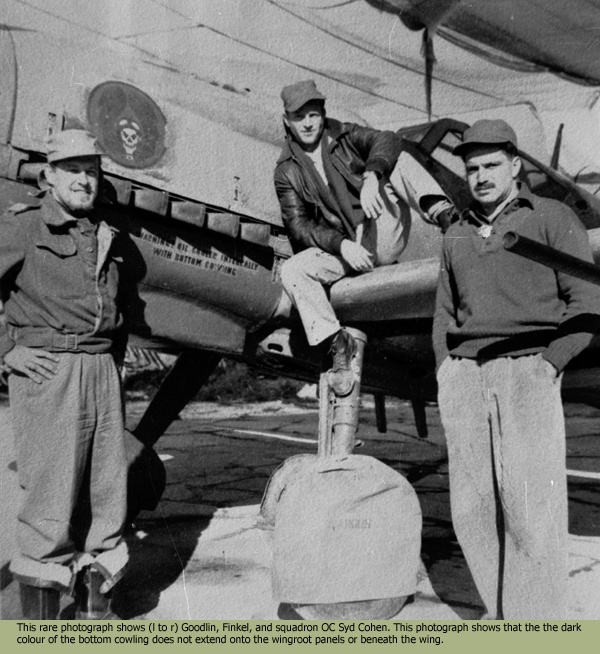 The above photograph reveals that A is limited to the bottom cowling panel and the scoop. Colour B obviously does not extend farther back on the sides or undersurface of the aircraft. A third photo, higher in contrast but of lesser quality, sheds more light. 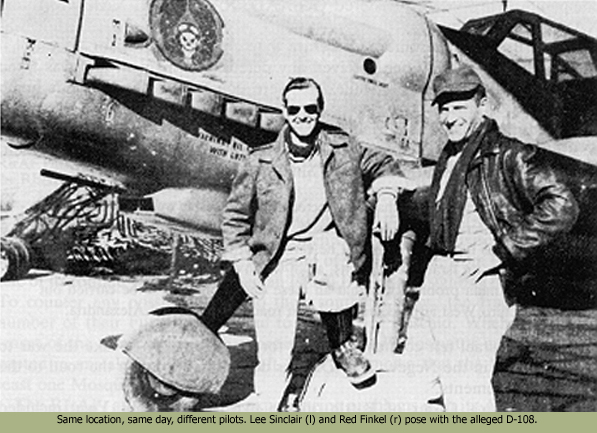 This third photo shows that the light-coloured dots and scratches on the bottom cowl are actual damage and not photographic artifacts. It also more clearly illustrates a curvy seam in front of the panel in question, which seems to be the line that the border of A/B follows in the first picture.

The appearance of B can be explained in two ways. It can be dirt/grime or a second paint color. A third hypothesis, that the difference between A and B is just an effect of weathering and sun bleaching on the A shade, can be discarded as such an effect would not create the sharp line around the warning. You can see weathering elsewhere on the fuselage, particularly near the cockpit. 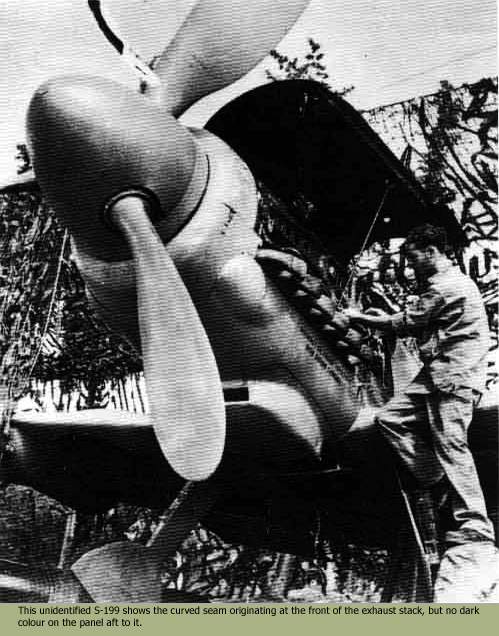 This last photo also shows that the curvy seam follows a bump in the nose, and that not all the Israeli S-199s had a dark colour on that panel. but what is that dark colour?

Is B a second paint color? It is darker than A. If B were grime or soot or dust or some combination of dirts, it would have soft borders, but it could also be cleaned away. 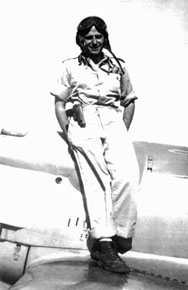 If that is the case, we can interpret this photographic evidence as showing that someone cleaned the warning area, but left the rest of the residue alone. That's possible, but a better answer may be that this is darker paint that just happened to be available and which was needed to cover repairs to the bottom cowling body panel. However, even if this second explanation is true, there's no way to determine the correct colour - although a dark green might make a good guess. No other pictures show no evidence of this A-B two-tone scheme.

With the question of two colors carefully negotiated, let's again consider what paint was used for the gross majority of the Israeli S-199s. Historical researcher Yoav Efrati has concluded that the paint used is not RLM 02, but was a similar German paint called RAL 6013 (Schilfgrün or "reed green", similar to RAF Hemp). RAL 6013 and RLM 02 only noticeably differ in two respects: RLM 02 is slightly darker and flat, whereas RAL 6013 is a lighter semi-gloss. Again, photographic evidence helps confirm Efrati's conclusion. The photo at right shows a definitely glossy S-199 (look at the wing, specifically), probably a new arrival, just assembled. Giddy Lichtman, the guy on the wing, was one of the 101 pilots who tested out new aircraft, and perhaps this picture is taken before a shake-down flight. Another picture also shows a glossy finish, but not nearly as much as the picture with Lichtman. The reflection of Maury Mann in D-106's flanks highlights the glossy paint finish. 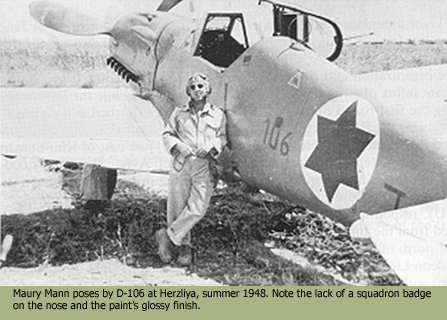 In addition to solving the mystery of the colour, Efrati, an El Al employee, also had a considerable hand in the latest restoration of the IAF Museum's S-199. It has undergone several revisions since the museum opened, changing colour from gray to tan to the latest scheme - in RAL 6013, of course. Efrati made sure the aircraft was done right this last time. The pictures below were taken at the IAF Museum in June 2001. The extremely bright sun played with the gloss in the paint, resulting in many reflections and a variety of tones, but you get the picture. Note that the fuselage band is white-blue-white and that the arrow indicating the foothold on the port side (you can just see the top it in the second photo) is black, both conclusions I agree with. 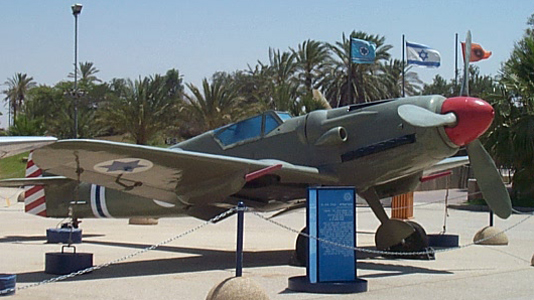 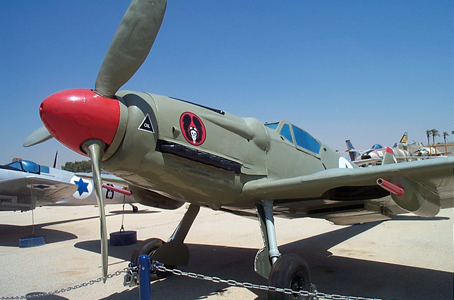 As a final tidbit, here is a direct comparison of RLM 02 and RAL 6013. The small model is the Hobbycraft 1/48 scale Avia S-199, partially built and painted in Polly Scale RLM 02. The big model is the museum's S-199. Again the sun plays tricks with the colours, but compare the flat RLM 02 to the gloss of RAL 6013. The RLM 02, as stated earlier, is also slightly darker. 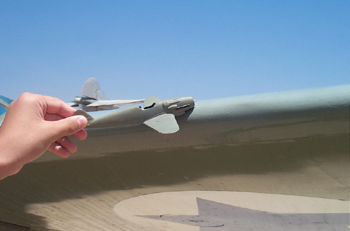 The red of the text on these pages - modeled on early British red or insignia red (FS 31136) and having RGB values of R:162, G:2, B:2 - along with white was used at first to identify the 101 Squadron Spitfires that came from Czechoslovakia. The Czechoslovakians painted the spinners of their Spitfires this colour and Israel adopted it for the rudders' red and white stripes. Eventually, these markings were painted on the S-199s and the Mustangs as well.

These two images show off the squadron markings. The gorgeous Spitfire image comes from Malcom Laird of Ventura Publishing. It is a color version of one of the illustrations in Spitfire: Star of Israel (see the Books, video, and other goodies page). Note that during the war, the Spitfires Israel brought over from Czechoslovakia were painted in the standard gray and green RAF scheme. After the 1948-49 war ended, Israeli crews hastily painted over the gray with brown housepaint. Gael Elégoët, creator of the fabulous Mule Index Web site (RIP), designed the lower S-199 in RLM 02.

Below is an image of a S-199 model I found posted on Usenet, and allegedly painted in RLM 02. No doubt the vagaries of photography and the weathering effected by the modeler have slightly altered the colour to the one you see presented here. No one is certain whether the arrow indicating the foothold was red or black (I suspect it was black), was it was certainly segmented (Sorry, Gael). 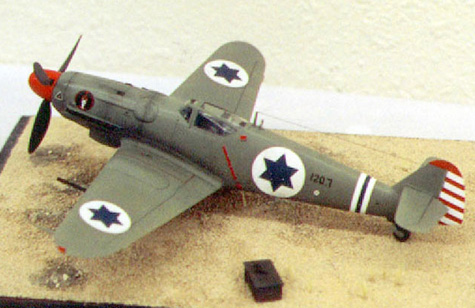 Now, back to the matching S-199 and Spitfire. Look at the red paint scheme on the rudders and vertical stabilizers. On the Spitfire, the red paint on top of the tail was restricted to the moving rudder only. The red on the S-199's vertical stabilizer covers not only the rudder, but extends to the leading edge, as if it were mimicking the Spitfire's rudder outline. I interpret this to mean that the S-199 tails were only painted - at the earliest - at the same time as the Spitfire tails. The S-199s retained monotone tails and RAL 6031 spinners until the Czechoslovakian Spitfires showed up. While the 101 Squadron S-199s received the angel of death badges in June, they almost certainly only received red spinners and red-and-white tailfeathers after the Czechoslovakian Spitfires showed up.

I state this as fact, but the truth cannot really be knowndefinitively, given that we don't know dates for very many photos. If I find evidence to the contrary - such as a pic of a S-199 sporting the red and white scheme that is known to have been lost before the Spitfires arrived - I'll post it here.

Jack Cohen, a 101 Squadron pilot who helped prepare the Czechoslovakian Spitfires for the Velvetta ferry missions, says he suggested the use of a red spinner and red and white diagonal stripes on the tail based on his SAAF experience in World War II. But while his 4 Sqn SAAF did have Spitfires with red spinners and red tips on the vertical stabilizers, the Czechoslovakian Spitfires already had red spinners themselves. Jack may have suggested that the Israelis use the red and white rudder stripe scheme, but photographic evidence shows that the rudders were not painted red and white until the planes arrived in Israel.