Get your own 101 Squadron stuff at the online store!

I finally decided to sell some 101 Squadron-related merchandise. My WarBirds squadron got together to make some gear a few years ago. Some of our newer flying buddies weren't around when we made our very cool and not-at-all-geeky hats and T-shirts and coffee cups and mouse pads, and now they look on jealously at our annual conventions.

Well, it doesn't have to be that way anymore, and you, the anonymous netsurfer, can take advantage of this as well.

I have built a Web shop of 101 Squadron swag. It has a variety of shirts, cups, mouse pads, and other goodies. Heck, you can even buy a thong - although recommend you do that only if your name is Webs. If you're lucky, you may want to ask about a bulk discount.

Give the place a look. The T-shirts are almost exactly the same design as our virtual squadron's first batch, but I doubt they will fade as much as ours did. If there's anything you'd like to see that isn't for sale, just send me an e-mail and I will whip up a new design for you. Unfortunately, I am limited to one design per item, so I can't offer a selection of mouse pads, for example, but I can change it. Also, the site does not offer proper hats, so we early adopters will still be the only ones with the red baseball caps we made.

I especially like the wall clock. And the thong, of course...

The 101 Squadron vets I've spoken to and others who have helped me gather information have been extremely helpful in not only supplying information and photos, but also in pointing me to books, movies, and TV documentaries. Here are some excellent sources of information should you wish to learn more.

Most of the pilots were part of "Machal", the Hebrew abbreviation of the phrase "foreign volunteers". The Machal organization is still going strong, and offers an informative PDF on Machal contributions to Israel in all branches of service in the War of Independence. The Machal Web site is here, the PDF is here.

There are other sources of info - many more books for example. I've only included on this page works I've actually consumed.

Note: I've included links to these books to Amazon.com where available and to Barnes and Noble.

Primarily a guide for model builders, this paperback has enough text and technical details to make a worthwhile read - if you can find it. I found a mere one copy advertised online (oddly enough, for sale right here in Montreal) which I snapped up. It's just a treasure trove of photos and illustrations, like the Spitfires above. Ventura Hobby Products had planned to write a similar guide to Israel's S-199s, but poor sales of this one forced Malcolm Laird, the big cheese of Ventura, to limit that to a section in a compilation (with the help of yours truly).

Laird has graciously supported me with permission to use pics and just kind words in general. You can purchase copies of Spitfire: Star of Israel at Ventura's homepage.

Other books used to research this site:

Shield of David, by Murray Rubenstein and Richard Goldman. Prentice-Hall: 1978

No Trophy, No Sword, by Harold Livingston. Edition Q: 1994 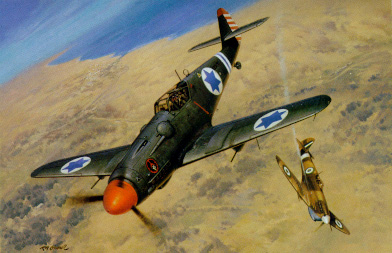 I have spoken with Roy Grinnell and he said he based this painting on how Rudy Augarten described the S-199. So, the Avia's not the right color... it's still cool. (By the way, the image above is less vivid than the print, but it's the best I could do with the patience I have.) The print depicts Rudy's Oct. 16, 1948 victory, his first in Israel and the third of his career.

The American Fighter Aces Association sells a limited-edition, 24"x30" lithograph, signed by both Rudy and Roy, for $150 US plus $7.50 postage. You can order it through any of the following:

The Association accepts cash, checks, and most credit cards. 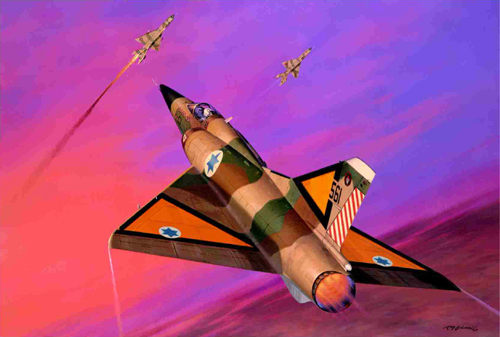 Giora Even (born Giora Epstein) guns down an Egyptian MiG-21 on Oct. 20, 1973 during the Yom Kippur War. Even would shoot down four MiG-21s that day, one with a Shafrir missile and three with the 30-mm cannon on his 101 Squadron Nesher (an Israeli copy of the Mirage V). He would finish the Yom Kippur War with 12 kills and retire with 17 kills to his credit, a huge amount for the jet age. OK, this art has very little to do with my focus on 101 Squadron, but it's pretty nifty nevertheless. If you would like to buy a print of this picture, signed by both Giora Even and artist Roy Grinnell, e-mail me. Cost is $150.

This PBS documentary was produced by Miami's WPBT and premiered on that station in December 1998. It has been shown several times as part of a pledge drive. Although it covers a wide range of Machal volunteers, the film spends a considerable amount of time with Giddy Lichtman of the 101, currently a resident of South Florida.

These audio files are three parts of a lecture given by real life members of 101 Squadron and recorded by me. They are all in QuickTime 4 format, audio only. Sound quality gets spotty infrequently, but overall is good.

Intro by Red Finkel, lecture by Rudy Augarten on his WWII and War of Independence experiences.

More of the same.

I only ask two things. If you listen, please tell me what you think and attribute me if you use them for anything. Thanks.

Don't underestimate the value of a model kit with regards to information. Some can be veritable gold mines, like this one. This kit, numbered HC1540, provides a good deal of detail on the varying paint schemes of the Israeli Avias and shows off just how ugly the plane really is. 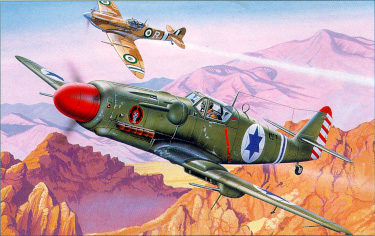 The S-199 is really that green on the box art, shown above. The plane is D-120 and I believe the combat depicted shows Modi Alon's July 18 downing of a REAF Spitfire Mk Vc. If you want a review of the model, take a look at this Hypercale feature. 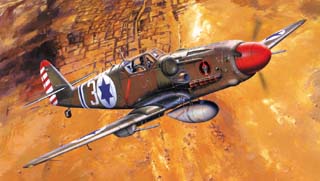 For scale modelers who prefer 1/72 scale, here's an Avia direct from the nation that built the real one. I haven't seen it in person and so I can't comment on it with any authority, but the company does supply a bit of info at its Web site. I do not know if the only provided paint scheme is the post-War of Independence mottle shown in the image above or not, but I suspect so.

Finally, a company has released the Spitfire Mk IX in 1/48 scale. It's just a bonus that modelers also get a kit specifically detailed as one of the 101 Squadron Czechoslovakian Spitfires. The decals that come with the kit let you build it as either White 14 or White 26. Hyperscale also has a review of this series of kits, although not specifically of this exact configuration. I can confirm some sinks in the plastic in my kit, particularly in front of the ailerons. 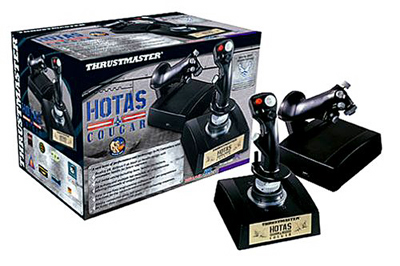 The ne plus ultra of flight sim gear. The Thrustmaster Cougar is made of metal and feels solid in your hands. Even the hat switches are metal, so the shafts won't snap. It's quality, and you pay for it: $270, although Amazon offers free shipping (as of November 2002) and the joystick comes with a free copy of the IL2 Sturmovik Eastern Front combat flight sim. Although Thrustmaster/Guillemot does not advertise the fact, this USB suite does work in Mac OS X as well as in Windows. Even better, there is a port to accept the cable from the old Thrustmaster RCS rudder pedals. Click here to see the Thrustmaster Cougar at Amazon.com.