During its participation in a war of nine months of hostilities, 101 Squadron sure moved around. Bases it used include Chatzor, Ekron, Herzliya, and Netanya. Anyone familiar with the history of the place and era already knows that base and town names shifted just as frequently. Each airbase, to take an example that's particularly relevant, had an RAF name, an Arab name, and a Hebrew name - and even some of the Hebrew names change over time. To maintain a contemporary standard, Israeli bases are referred to by their original Israeli designations.

The first S-199s to arrive in Israel arrived inside C-46s at Ekron, as part of Operation Balak, and were assembled there. 101 Squadron stayed at Ekron until a June 1 REAF Spitfire raid on that field damaged a pair of S-199s awaiting assembly in a hangar. The effectiveness of the raid, and the revelation that Egypt knew where Israel based its fighters, convinced the air force to pull the unit back from the front lines and move it north. Native sons Modi Alon and Ezer Weizman chose the new destination, Herzliya. It had a 2,000-m unpaved runway bulldozed into the terrain amid orange groves. Weizman claims that one of the reasons they chose this field was because they felt the unpaved strip would handle the uppity Avias somewhat better than concrete, but Syd Cohen believes the softer surface actually promoted accidents. The REAF never attacked the Herzliya field, possibly because they never knew any aircraft were based there. The aircraft were nestled between orange trees beneath camouflage netting - apparently successfully hidden, as Herzliya was never targeted by enemy air attacks. A water tower - which still stands - served as the control tower.

The actual move to Herzliya from the original base at Ekron took place shortly after Alon shot down two REAF Dakota bombers on June 3 - probably during between June 4-6.

At the same time, the Central Maintenance Unit - the guys putting together and repairing the S-199s - moved from Ekron to an airfield at Kibbutz Ma'abarot, next to the Netanya airfield. 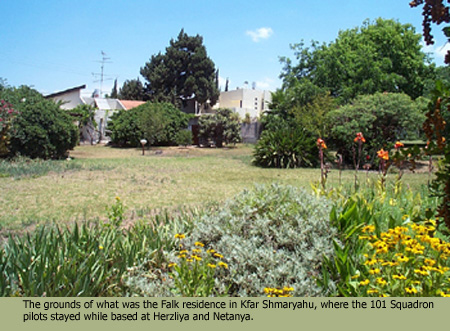 In late July, renovation at Herzliya forced the 101 to move to Netanya, where it stayed until Aug. 26. Although the planes and equipment transferred to Netanya, the pilots remained at their quarters in Kfar Shmaryahu, where they stayed while based at Herzliya.

On Nov. 9, with the Negev front the focus of the war and the Egyptians having retreated beyond striking range of the southern airfields, 101 Squadron moved to Chatzor, where it stayed for the duration of the conflict. [START HERE]

I have been unable to find a good period map showing the relationship between the battlefront and the air bases. I have, however, found a modern IAF map that shows most of the 1948 bases - Netanya is the notable exception. I also found some declassified period maps in the public domain at the Web site of the Harry S. Truman Library and Museum (yes, they use "S." not "S" - I don't know why). One map shows the disposition of forces at the June 11 ceasefire, and the other is a map of the situation in April 1949.

The June 11 map is hard to read, but look at the tenuous link connecting the southern forces with Tel Aviv. You can really get a feel for the importance to the Israelis of maintaining secure air lanes to the Negev.

I put red dots on the 1949 map next to the names of places important to the 101's story. Look for the bases at Netanya (Natanya) and Kfar Sirkin (Petach Tikvah) and the targets of Al Arish, Gaza, Majdal (El Majdal), Faluja (El Faluja), and Isdud. Note that the dots only call attention to the names and do not indicate the exact locations.

Information on each of 101's bases follows. The fields will be designated by the Hebrew name during the 1948-49 war and the RAF base name (if applicable), in that order.

The REAF attacked Ekron June 1, while the 101 was stationed there

The RAF finished construction on Qastina in 1945. Israel took control of the field November 9, 1948. This airbase serves as the current home of 101 Squadron's F-16s. In 1948, the base consisted of two crossing concrete strips, a small control tower, and ramshackle barracks, located some 20 miles southeast from downtown Tel Aviv. In winter, the desert airfield grew cold at night. Red Finkel recalls placing three kerosene heaters under his bed and crawling under the blankets while wearing all his clothing.
ICAO code: LLHS
Location coordinates: N31 46 E034 44
Elevation: 121 ft (37 m).
Two runways 05/23 of 7,986 ft (2,434 m) length and 16/34 of the same length

Of course, several European airbases also played their parts in 101's story. Chief among these was Zatec (pronounced ZHAtess), Czechoslovakia. Gordon Levett describes it as it appeared when he arrived in April 1948:

The town of Zatec, in the Sudetenland, became German - and known as Saaz - in 1938. Czechoslovakia reclaimed the town at the end of the war.

The hotels, bars and cafes in the small square which had echoed to the sound of 'Horst Wessel' and 'Deutschland uber Alles' when the Luftwaffe were at play, and the airfield down the road where they flew their Messerschmitt 109s into combat, was now the European base of the despised Juden.

The two hotels, the Stalingrad and the Zloty Lev, were full of ATC (Air Transport Command) personnel. There were about 50 altogether - pilots, navigators, flight engineers, wireless operators and ground staff - mostly Americans.... I got a warm smile, a hand-shake and a 'Hi, there' from all except the Chief Pilot who gave me a cool nod. He dismissed anything - animal, vegetable, or mineral - that was not American.

The airlift to Israel had already started. The two hotels were like a Second World War officers' mess. Fresh crews departed, exhausted crews returned. There was eating, sleeping, drinking, poker and gin-rummy going on night and day. The bedrooms were a shambles, dining-room, kitchens and bars were always open, the staff happily harassed. Nobody wore a kippa and there was little sign of Judaism, orthodox or not, except wit, humour and chutzpah. (Levett 1994)

Niksic is a city in Montenegro (then part of Yugoslavia), and a nearby former Luftwaffe airfield of the same name served as a refueling stop for the Velveta flights. About 60,000 people live in Niksic now; it is the second largest city in Montenegro. Some authors call the airfield the Israelis used "Podgorica", but that isn't quite correct. Podgorica, 30 miles south of Niksic, is Montenegro's largest city and capital. It had been renamed Titograd but with the fall of communism is now called Podgorica once again. Boris Senior recalled Niksic, which was built on a dry lake bed:

We were sitting in this field in tents, quite primitive conditions. There was no water and we had to go to the river to wash ourselves. There was a platoon of Yugoslav soldiers. They wouldn't let us out of the field. (Cull et al 1994)

We certainly had known more sophisticated airfields than (Niksic), which was just an open field with no runways, a number of tents, and a small river (which contained) an American Aerocobra fighter that had been shot down in World War II lying upside down with its wings being used as a bridge.... As in Czechoslovakia, so here too, the friends of yesterday were now suddenly cooler. Russia was getting second thoughts about helping Israel. The base, such as it was, was under charge of the Yugoslav Red Army, whose guards were not permitted to fraternize with the men from Israel. All facilities however were granted while repair work continued on the DC-4 navigator plane or "Mother Ship" as we referred to her. In the meantime, we removed the Yugoslav markings that had been painted on the planes with water paint, replacing them with the Magen David. During this short period, if the boys didn't feel the chill of - call it, open arrest, this was mainly thanks to Syd Cohen and Arnold Ruch, two men of irrepressible humour." (Cohen 2000)