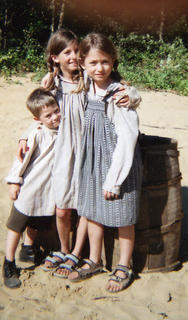 Note the ultra-modern footwear on the girls. The costumers had no shoes for the older girl (either actor*) and the shoes for Child Two gave her blisters. They’d have gone barefoot, but the sandpit contained scattered broken glass. The result? The kids were carefully shot from mid-calf up, although the father often lifted the properly shod boy into his arms. I’ll be looking for flashes of sandal, though, when this finally hits the air.

* When did the term “actress” fall from favour, anyway?

2 thoughts on “In costume”