The good news first: Nearmiss reports that our outline has been accepted for production: “We’re in. No contracts yet, but I did bug him about it today.”

She’s going to take first whack at the script this week while I figure out how to teach Javascript, CSS, and syndication to a class of tech semi-literates. I think I’ll start by not teaching how to code Javascript. It should be adequate to show them only what it is, to make them familiar with the code through some simple examples. They’re training to be journalists, not Web designers.

Now the bad news…. Quite a few Netsurfer Digest subscribers have written to me since the last issue in November. They want to know what’s been going on. I’ve posted in blog posts all that I know, so I furnish them with the relevant links.

Today, a subscriber wrote in with the first legal threat. Whether or not a lawsuit, even a class action suit, is worth pursuing for a $20 subscription is beside the point. One thing I did learn from the threatening e-mail was that Arthur had put a line of red text on the site that reads “Since some of you are wondering, yes we’ll have our first issue of the 2006 year out shortly (roughly by Jan 23/24 or so). Patience, patience!” You’d think he’d tell me about that.

The letter reads (with an edit, by permission):

Your last issue was in November, 2005. The links to all services such as back issues etc. don’t work; they are locked.

I have been a subscriber since 1998. You have thrown out all pretext to professional journalism and the public should know about it. There is always an attorney out there willing to take a class-action suit against your publisher. I have copied those Internet news services that may bring the story to the public.

It’s not the cost of a subscription that matters but the principal. You have not lived up to your subscription contract. How many $20 subscribers have you cheated this year? It’s not the editor or writers that I point the finger at (I wonder whether they were cheated on paychecks) but the publisher. This is worse than any security problems we face.

I write this post on my laptop, seated in the downstairs bathroom as chinchillas run free across my feet, legs, shoulders, and head. One just scampered across the top edge of the laptop screen. 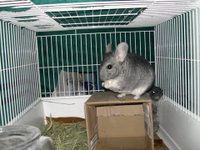 We have a new species in our home. Child One has decided to take in two rescue chinchillas. They are about a year old and unlike most small mammals, live a long time. Child One is 11 years old and may have a graduate degree by the time her chinchillas reach the end of their natural lifespan.

One is light gray and male, called August. He’s on top of the box. The other is darker (“black velvet” in chinchilla-breeder jargon) and female, named June. August is more social, and neutered.

These are by far the most social mammals in our home, dog and some children included. If you have a chance to play with them, or you’re looking for an expensive pet (or a free rescue pet), I recommend them.

I bet the mouse gods are angry.

The ophthalmologist took a look at my eyes this morning. He concluded that I do have keratoconus in my right eye. He also said my left eye was fine. He said that the keratoconus shouldn’t worsen given my age.

He didn’t present me with a lot of treatment options. Given that my left eye is perfectly correctable, the doctor said the only option he’d consider is to do nothing. He could have prescribed a hard lens for the right eye only, but he said that patients who use only one hard lens tend not to use it at all, since it’s uncomfortable. That solution, as I mentioned before, does not fit my lifestyle.

He ruled out surgery or implants because I don’t need them to function.

So I’m stuck living life as if I have a clear sandwich baggie (both layers of plastic – I checked) permanently welded over one eye. It’s a huge pain in the ass.

The three and a half good eyes of Nearmiss and myself finished the “72 Virgins” outline. It’s in the producer/director’s hands. News as it comes.

It’s cold and snowy out. Steak under a broiler is just too gray and lifeless. I don’t have an indoor grill.

When I need a wintertime beef fix, I tend to go out or fry it at home. I cook a bit, so it’s occasionally more sophisticated than slapping it into a cast-iron pan and letting it sear on both sides – although that has its place.

I tried something different this week and thought I’d share – it’s ludicrously simple and delicious. My local Iranian grocery sells huge boneless sirloin steaks for C$11/kg. That’s US$4.33/lb. I had to do something with it. This came out wonderfully. Scale as necessary:

Cut the steak into strips a half-inch wide. Mash half the peppercorns. Dump all ingredients into a bowl and mix. Let it sit and marinate an hour or two.

Chow/stir fry the meat until it reaches the proper level of doneness (which is rare, of course). Dump into a serving dish and pour the masterful, naturally-produced pepper gravy over the meat. Serve.

This dish has one of the highest taste/effort ratios I’ve ever managed. Let me know how it comes out for you.