I spent last night at the latest Montreal Film Group (MFG) soiree, meant to be an evening of informative presentations by film-related organizations. The room was packed, and I met several people. It was impossible not to, even for me.

At the same time, the size of the crowd proved a disadvantage. About half the attendees showed up to socialize, and rudely yammered on during the presentations. Granted, most of the presentations could be summed up as “Hi, I’m Jane. Go to our Web site for more information.” But show some courtesy, people.

I think Ezra and Val have reached a fork in the MFG road. With more than 500 members to manage, they will have to decide to take their group along the path to social club or helpful organization, or at least they will have to define the events more precisely. I would not have wanted to speak last night, and the noise bothered a few of the people onstage who did.

I met several people from Alex’s parties, including Doug Taylor and the seemingly omnipresent Elana.

I ran into Josa again, and she remembered my name – my last name, not my first name, which was on my nametag. In one of those degree of separation deals that seems so out there until you realize that only 274 anglos still ive in Montreal, I chatted with Geoffrey Uloth.

Geoff works the IITS/AV counter in Concordia’s CC building. For the two school years previous to this one, for which the Journalism Department moved into new quarters, I taught my courses in the CC building and twice a week, I would borrow a projector from Geoff. I had no idea he was a filmmaker until last night.

That’s a nice coincidence, but the twist is that Elvi’s band, the Disciples of Ursula Big Band, contributed to the soundtrack on a film by Geoff’s twin brother David.

There. Now that story is all O. Henry on your ass.

I met several new people as well. I kept bumping into Ridge, an Aussie who was clearly having too much fun working the crowd. Another gentleman, Emru, has a life that parallels mine. He’s a freelance journalist and editor, runs a hobbyist history Web site, and blogs (all his links are available there). Who knows, he might turn out to be a friend.

Most intriguingly, Phillippe came over to chat as my evening wound down. He’s looking for a collaborator on a screenplay. His pitch seemed right up my alley, setting-wise, and I can only hope that he’ll appreciate the upcoming revision of “Sheep’s End” as a writing sample.

I’m working at a good clip, on “Sheep’s End” and on stories for one of Alex’s projects.

Out of the blue last night, I and the principals of Netsurfer received a long e-mail from Arthur. I’m not free to reveal what he wrote, but he did explain what he’s been doing: working on a hardware start-up. The device will hit the market in a month or so.

That doesn’t really explain his total lack of communication, but at least we know he’s not a strung-out junkie. And Arthur reiterated his desire to keep NSD going – although not, it must be noted, for the first time. He’s independently considering the same options I did back in January. (Search for “Netsurfer” in the nifty new Google search form at the bottom of the right sidebar to find those options.)

I have lots going on this week, other than the screenwriting stuff.

I also have some tests and assignments to correct and Child Two is having a sleepover birthday party Saturday night, but the big event is the annual Irrational League fantasy baseball draft Friday night. More on that in a subsequent post, along with a new list of only the finest baseball links.

In the meantime, let me sate your appetite for all things Webs with a photo of Child Three: 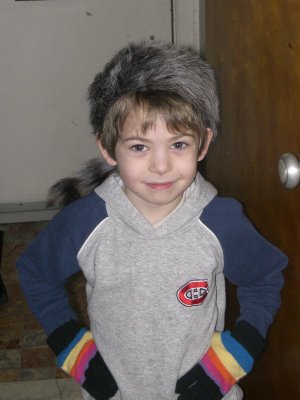 Elvi bought that hat in San Antonio, where she recently attended an industry conference.

Oh, and the kids and I will be in Houston for Passover, possibly with the wife, too. And you may find it amusing that we managed to destroy our central thermostat while moving a couch, so the house is alternatingly steaming or freezing for now. We got our newer van back yesterday (the starter had shorted out and burned wire insulation) so a broken thermostat only seems fair and balanced on the consumer karma scale.

It can’t be that hard to wire a new thermostat, can it?

I spent the whole day on a new draft of “Sheep’s End”. It’s a particularly hard task. Reviews have ranged all over the map, so I’m not sure What really does need to change. Readers did reach more or less a consensus on a few items, so I can focus on those.

I need to start off with more action. The first draft languished in character through most of the first act. The script lends an opportunity to a burst of action at the beginning – two opportunities, in fact. I can choose action that reveals more of the character of the lead, or a different action sequence that reveals plot. The choice is clear (the first one).

The lead, Hawthorn, needs to be less subtle. He’s not a man of many words, but that leads most readers to assume he’s a man of not much drive. That distinction requires less subtlety, I suppose, but I can’t help looking down my nose just a little bit at readers who don’t perceive that distinction.

Similar critiques follow Hawthorn’s decision to invest himself in the plot. Several readers failed to notice his motivation. It could be clearer.

The first thing I’m doing is transcribing the first draft back to an outline, which lets me better analyze the story and motivations of each scene. Once that’s fixed, I can go forward and make sure each scene hits its note, accomplishes its goals.

There’s a success in here somewhere. I just have to carve it out.