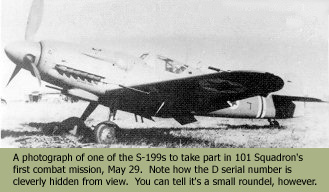 Lou looks at the fighters with stars of David, at each pilot. He looks at the countryside, the country they represent. He recites the Sh’mah, the affirmation prayer of Judaism.

He carefully throttles up. 102 begins to swing left, but Lou controls it, adds more power. 102 thunders down the runway and climbs slowly into the sky.

Behind, 104 advances onto the runway.

Lou peers at the terrain. He looks back at Modi and raises his hands in a gesture of “I have no idea where we are.”

Modi gives a thumb-up. 104 noses forward to take the lead.

Over the sea, Modi spots the inland target: Isdud. He points it out to Lou.

EGYPTIAN SOLDIERS and a dozen vehicles occupy this Arab village’s town square. The EGYPTIAN COMMANDER and AIDE consult a map on the hood of their armored car.

A stork flies from Isdud over the road northeast. Below the bird, more Egyptian soldiers and vehicles line the road, concentrated at a bend in the road a mile out of town. The stork flies over a steep-walled wadi and a destroyed bridge whose ancient stone pillars still stand defiantly.

Across the wadi, ISRAELI SOLDIERS hunker down in trenches and foxholes. Some fidget in jeeps and half-tracks.

At the growl of piston engines, the stork veers off. The sound grows louder.

Out of the north, two S-199s fly in on the deck. The ISRAELI COMMANDER discerns the stars of David under their wings.

After a moment of disbelief, the Israeli infantry cheer.

Lou spots the mass of Egyptians at the bend in the highway.

He stays to the right of the road, heads for central Isdud.

The Egyptian soldiers ignore the sound of distant aircraft. The commander scans the sky, sights an inbound fighter to the north, points it out to his aide.

The aircraft flies directly at him. Two small bombs fall from its belly.

The commander yells a warning in Arabic, scrambles under his armored car.

Lou passes low over Isdud. His two bombs explode in the square behind him.

104 flies south along the highway, then turns east.

A sweaty Modi pulls 104 to the left. He looks back at the burning column.

He enters a gradual climbing turn until he points into the setting sun. In front of him, greasy smoke rises from burning trucks. The air is thick with disorganized AA tracers.

Modi pulls up to avoid a collision with 101.

Ezer zips in low from the coast. He aims for the mass of vehicles at the bend in the road. His wing cannons boom once, then stop. His cowl machine guns tick on anemically.

He pounds the dashboard.

He mashes the cannon trigger. He’s unsteady on the stick. His machine-gun fire stitches the ground haphazardly.

Streams of AA tracer reach out for him. He gives up on the trigger. He weaves through the AA storm, escapes unscathed.

Modi and ground crew surround 104. Its left tire is blown, its prop blades and left wingtip bend at odd angles. Skid marks and ruts in the dirt mark its path off the runway.

Ezer cranks down the flaps, aggravates a blister. He lowers the landing gear. He sees the men and the wrecked 104 ahead.

He lands a shallow approach, rolls past the wreck.

The control tower is equipped with a few radios and little else. Milt works a radio, chews an unlit cigar. Modi and Ezer, still in flight gear, and Milt watch Lou’s 102 taxi.

I have a spot of damage here, chaps, but I have Oklahoma in sight. Request clearance.

The three pilots in the tower scan the sky but see nothing.

Oklahoma tower to Red Leader. You’re cleared to land, but we don’t see you.

Red Leader, we don’t see you.

The pilots look south. There’s nothing there.

An ugly plume of black smoke sprouts on the southwestern horizon, two miles away.

I tore the dryer apart yesterday. I took off the back plate, lifted the top, and removed the vent the lint trap slides into.

The drum was a bit stiff, but I pushed it with some force and it started to rotate more freely. The blower fan didn’t turn either. I pushed that, then it too spun freely.

I plugged the dryer back in and it worked.

I guess the water filtered down through the lint trap to the blower fan on the bottom and brought some lint down with it, like sediment. The water evaporated, and the lint build-up seized the blower fan’s axle. That’s my assumption, anyway.

But give the dryer a point toward a draw. As I reassembled it this morning, I dropped a screw down the vent. It fell below the fan, I was sure – there was nowhere else for it to go – but I couldn’t see it behind the fan blades. I figured that if the fan were moving, I could see through it enough to spot the screw. As I sped the fan by hand, my finger slipped off and the sharp edge of a steel panel sliced it open. I didn’t need stitches, but it is my right index finger, so I offer the dryer its due. I found the screw, though.

I shudder to think what a service call might have resulted in. A new motor? A new blower? Would a repairman come in, wiggle the fan and drum and leave? I suspect not.

Today, Child Three and I visited a film set in St. Henri. Robert the director was filming the script I helped him with earlier this year. Patrick, the assistant who drove the children and me to the “Dr. Bethune” set last summer, was on Robert’s crew. I think I recognized another face as well. We arrived during lunch break and stayed on set a total of two hours, long enough to see two shots. Robert asked Child Three to come up with an idea for his next film. It looks like it’ll be a war movie, with ten people and two catapults on each side. No horses, though – the siege engines will be towed by donkeys.

On set, I ate a dubious chicken salad wrap that today’s warm sun had been heating for who knows how long. So far, I’ve kept it down.

WarBirds has a new beta version out that establishes that state of the art of flight modelling. This video shows a low-level dance among flak bursts between a Bf 109E and a Spitfire Mk I.

For the past month, I’ve been searching for an external story on which I could hang the internal story of “By the Book”. I had been toying with a court case, but it felt so bolted on, inorganic to the spine of the story.

This morning, I discovered how to sew them together. Sort of. I have the first few sutures in place, but I’m sure that as I write, the rest will tie things together. The result should be more healthy patient than Frankenstein monster.

I am raring to get at this. Unfortunately, Elvi’s recording DUBB‘s second album in studio this weekend and I have the kids. This week will be filled with visiting family and events: Child One is having her bat mitzvah next Sunday.

As long as this temporary delay sharpens my hunger to get this idea and subsequent thoughts onto the page, it’s not a problem.

The van sucked up $1,500 for repairs. Our plumber thinks the dryer just needs a new belt, and maybe a new fuse. Let’s hope. I’m about to tackle it.