I was all set to watch the Alton Brown channel, a.k.a. the Food Network, yesterday. Ten episodes of “Good Eats”, followed by a show of background and bloopers, followed by the premiere of his new show “Feasting on Asphalt”.

All was going to plan until a little headache kicked in. I took my standard 600 mg of ibuprofen, but that didn’t help. Uh oh. That meant a migraine was on the way.

My Dilaudid was depleted, but I had two Percocet left – somewhere. I had taken them on the camping trip of a few weeks ago, but I couldn’t find them. Uh oh, uh oh.

I had some expired prescription Motrin, which is only more ibuprofen. I also squeezed some nasal Imitrex into a nostril. That works half the time, but not last night….

The pain sent me to my darkened bedroom, and I had to cancel my date with Alton.

Elvi arrived home about 9:00 p.m., and soon later I asked her to take me to a hospital emergency room. It’s something I’ve done once before, when neither the painkillers nor the Imtirex worked.

I have an appointment with my GP a week on August 10, but the emergency room whisked me ahead of everyone else. There’s something about severe acute pain that punts one to the head of a queue.

A nurse plugged an IV into my arm and added a painkiller called Max-something. It worked, slowly. We got back home by 12:30.

My lovely family taped Alton for me, and that’s on deck.

Reader’s Digest finally killed the paranormal story I was fact-checking. Too much of it couldn’t be confirmed. Go figure. I still get paid for my hours of work on it.

I hadn’t posted much of screenwriting value in July because I haven’t done any screenwriting in July. That story left me so drained that it cut into the rest of my work. I had plans to finish “By the Book” this summer and do a further rewrite on “Sheep’s End”, but that’s not going to happen. I have notes in piles on my desk, but nothing’s in the scripts yet.

I spent this week catching up on work for Alex and decompressing. I did some work for him, but another stone fell out of the heavens and hit my on the head. I’m not sure whether to blog about that in detail or not, but it’s keeping me awake at night, and that’s cutting into my productive morning time even further. It’s enough for now to say that it involves my children, the education they deserve and desire, and my inability to provide it.

In brighter news, we inherited a large file cabinet and I transferred my 101 Squadron research documents into it. I still get a kick out reading this stuff, which is why it took me all evening.

Beyond historical value, some of this stuff is tantalizing. I’ll never know what prompted acting OC Maury Mann to write this, for example: 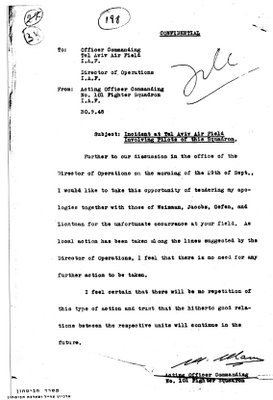 Among the documents, I found two floppy disks and a Zip disk that I’d forgotten about. The Zip disk has high-quality versions of dozens of photographs. I think Boris Senior gave me one of the floppies, which may contain the English manuscript of the autobiography that was published in Hebrew. I don’t know what’s on the other floppy, but I’ll find out this weekend.

On July 19, MLB changed the official stats of Greg Maddux. Rotoworld.com wrote: “A scoring change from a May 24 game against the Marlins has taken five earned runs away from Greg Maddux’s record, lowering his ERA from 4.99 to 4.60. Scorer Ron Jernick said he made the change after the Cubs appealed the May 24 ruling to MLB. The reversal also takes a hit away from Hanley Ramirez and gives Ronny Cedeno an error.”

Sportsline, however, refuses to make this change for the Irrational League or for any other fantasy-baseball league. This is ludicrous policy, astonishingly outrageous. I’ve asked twice, and the responses I get from the Sportsline reps amount to little:

Response (Commish Sam) – 07/21/2006 02:42 PM
Your league is automatically updated to reflect official MLB statistics corrections that occur up to seven days after the game has been completed. If the change is made any later, it will not be included in our statistics and your official Fantasy scoring will be based on the original statistic.

Response (Commish Herman) – 07/24/2006 09:47 AM
Also please understand the MLB does make corrections to stats, we have up to 5-7 days after the games is played to apply any corrections to stats from MLB, after this time the stats are official. This correction was made after the deadline so these corrections will not be applied to your league. I do apologize for this inconvenience.

In the meantime, those five earned runs are the difference between my team having a fantasy ERA of 4.63 and what should be 4.56. It will almost certainly make a difference in the standings, and may cost me hundreds of dollars. It may affect many other Sportsline customers as well.

I’m astonished at the disinterest Sportsline displays based on what seems to be an arbitrary deadline. The whole concept of fantasy baseball is to play pretend with real stats. If you don’t even get the real stats, what’s the point?

This is customers’ money that Sportsline is toying with. Some enterprising sports journalist should take this scoop and run with it.

Our phone line is back. Thursday night’s storm apparently blew the phone fuse. I didn’t know phone lines even had fuses in homes.