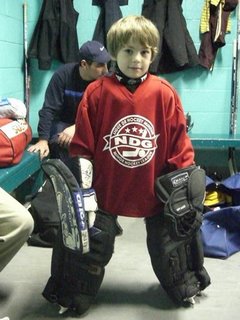 As promised. View the album here.

(The arena lends the pads, but is short of sticks. My father will buy Child Three a goalie stick for Chanukah, so long as I “tell him it’s no way to make a living!!!”)

Bonus proof that the world is ending:

In Montreal, it’s 15 degrees C and we’ve had a half-hour of snow this season.

In Vancouver, they have blizzards.

Rice University’s football team was invited to its first bowl game since 1961. When I went to the school, I saw the football team win a home game for the first time in four years.

My blog traffic quadruples Tuesdays and Wednesdays because this is the blog that shows up when folks search for “House” on Google. Sorry, Diane.

My teaching duties have ended for this year. The pay is OK, but what makes the effort worthwhile is when you get an e-mail that says “Thanks for a good course. I learned a lot!” And I did.

I have a long list of obligations to complete before I get back to original creative screenwriting. Oddly, blogging isn’t on the list, and yet….

I have just signed a contract for writing/editing/updating/research on some Montreal travel info. As I mentioned previously, I was offered the contract as a direct result of this blog. I’d like to ask all you Montrealers to add a comment to this post with your favourite things to do and places to go. Make my life easy.

Now, I’m off to get a haircut, call ACTRA, and write up a Reader’s Digest report all at once…. Multitasking’s where it’s at.

“Studio 60” made me chuckle last night. It seems like the show finally let Matt Perry do the funny in a way he’s comfortable with. He gave a performace that seemed… joyful. He gets to cock his head in that Matthew Perry way. Although his appearance has been poorly advertised, the episode gives show collaborator Mark McKinney some face time. Even playing a somber deadpan, he cracked me up with his first line.

(Posting about “Studio 60” before its shown in the US gives me a bit of a thrill. I asked Alex if that makes me a bad person and he said maybe, but it for sure made me a Very Good Canadian.)

The show is certainly getting funnier. It addresses an early critique of the show, that this drama about a comedy wasn’t funny enough.

In the dream, she returned home with many tattoos. Her bottom was covered in a small fishnet pattern that had a rose at every intersection of the lace. Even within my dream, I thought thath the elaborate pattern had to be painful – but Elvi told me she’d been drunk so it didn’t hurt much. Her bandmates had tattooed signatures on her back. Down from her hips on the front of her thighs, the tattoo artist had written vertical sentences that alternated in black and orange ink. He’d written business card info and “care of” instructions.

I argued with her about the tattoos, but then had to leave to join family at a meeting in a sort of dining hall. The meeting before ours was some sort of Israeli-Palestinian workgroup. I entered the hall and sat with my (deceased) grandfather, my dad, and Child Three, also male. (The three older of us are all first-born males of their fathers; Child Three is a first male, but third child. That probably means something.)

They say you dream every night. Why do I only remember the harsh ones? I’m a dream analyst’s dream, I guess.

Am I misjudging the situation, or does this NFL season feature far more shutouts than usual? Anybody know? Anybody industrious enough to crunch the numbers?

As I composed the first draft of this post, I received an e-mail from a travel-writing outlet, an e-mail that could help show that Blogging Does Pay. The editor had found my blog and expressed interest in hiring me for a freelance gig. Let’s see how that turns out.

This is what it looks like when a wife errantly feels herself too dignified to laugh at a whoopee cushion.