Craig Silverman’s Regret the Error blog reports on corrections in journalism. I visit once in a while, but at year end, Craig notes what he considers the best of the year in whichever categories he deems necessary.

I read his annual wrap-up last night and I laughed so hard I was in tears. It was just one of those episodes where you can’t stop laughing. Here are two examples of work that needed correcting:

This one is pure anti-genius, from the kids at the Exponent, a student newspaper at Purdue University:

The Queen Elizabeth gaffe is a case of misuse of automated spell-check. This one shows why you need to be extra careful when you copy and paste text or use a template to maintain a style. Make sure you remove all the old text. Better yet, use stylesheets.

Industrial Light and Magic has a Web site that reveals in gory detail how the company produced the special effects for “Pirates of the Caribbean 2”. It’s heavy duty Flash, but fantastic.

And you learn that Davy Jones has exactly 46 tentacles on his face.

Elvi and I decided to try to fix the dishwasher ourselves. A bit of Web research revealed that this was probably one of two problems. Either the plastic valve that the drainage hose hooks up to was clogged or the motor/pump had ceased pumping in the proper direction. We figured there was a clog in it, because that we stood a chance of fixing.

Thursday, we tried to get at the drainage hose from the side, but we couldn’t reach it. In moving the dishwasher out from under the counter, we stressed the copper pipe that brings the thing fresh water and it started to drip.

I worried that we’d split the pipe. I turned its water feed off and Elvi put a towel own. She’s more optimistic than me and she thought we just loosened the nut that keeps the pipe attached.

We then tried to follow the drainage path, essentially. We started taking parts off inside the dishwasher. We got as far as the spray arms and a water propeller, but we were stymied by a nut and rubber cover.

We stopped there and called Art, a plumber-savvy sort of fellow. He agreed with the diagnosis told us the right way to do this – he was too busy to come over. The way to get at that drainage valve is from the front, after removing the kickplate. While Elvi did that, I cleaned the gunk out of the parts we’d removed.

When you know what you’re doing and how to do it, repairs are easier. Elvi handed me the valve she removed and I used a skewer to push out the end of a chicken wing bone and the detritus that had agglomerated around it to seal off the passage.

IWC, the high-end watch company, produced a film to advertise its Pilot watch. The film stars two clipped-wing Spitfires, a LF IX E and a XIV. And a Junkers Ju 52. And John Malkovich. I fell in love all over again. Not with John Malkovich. 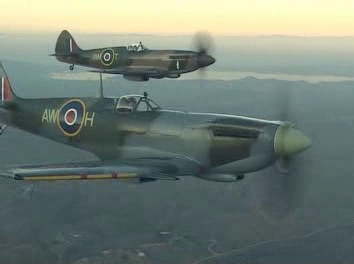 Then, watch the “making of” film here.

I think those two gorgeous creatures both belong to the Planes of Fame in Chino, Calif. That museum’s LF IX spent its career with Canadians, shooting down two Bf 109s with a third probable and a probable FW 190.

Bonus thought of the day:

If dogs had reached the levels of intelligence and technology that characterize modern humans, would they urinate in toilets? Or would scent still be so important to them that they’d pee on their homes’ walls?