Here are two animal images to celebrate the return of my Mac G4 to a full life.

First, our dog, Crash. His face says “I’m cute” but his posture says “Please don’t kill me.” That pretty much describes his life. 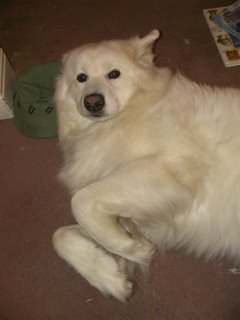 Next is an image from Digg. Granted, it’s only peripherally an animal image, but maybe this will seem as hilarious to you as it did to me at 2 a.m. 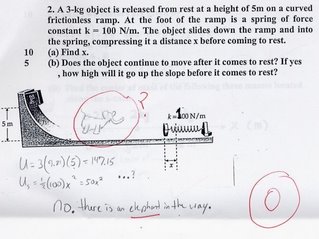 Is it funnier that the student did this, or to imagine the grader taking this seriously? The latter, if you ask me.

– Put some book links on the main 101 Squadron site. (Can I name-drop? Peter Mersky wrote me and asked me to sell his books.)
– Acquire a new power cord for my Dell laptop for the second time in six months.
– Do some paying work.
– Wonder if that loud hard drive really will drive me crazy. I hope that’s just Spotlight chunking away as it builds its search database.

It took a while, but I’ve managed to save nearly all my data and software. I lost three files: eudorastatistics.xml; a Firefox cache file; and Limewire.

The hard drive that choked also contained my OS 9 files. I saved some stuff for posterity and reformatted the drive. Even better, I used that drive and the new drive I plugged in to make a RAID. (A RAID is a process by which identical data lies on two or more hard drives, thus providing data security through redundancy and faster hard drive reading/writing.) I’ve always wanted a RAID, and now I can blow off that furshlugginer Carbon Copy Cloner.

Having saved my data on a different partition, I’m now copying what I saved over to the RAID (I chose a dinosaur name this time). My Mac tells me there are 34 minutes to go.

I also saved OS 10.3.9 system files, which are going on the RAID. The permissions on these files are undoubtedly screwy and I’m not going to even try to start up with that system, but I hope that my upgrade to OS 10.4 will accept these remnants as valid. If not, I can do a clean installation of 10.4 and re-install what applications I’ll need to and update preference and whatnot. No big deal, just more time.

I have remained remarkably calm through this process, much to my surprise and even more so, I’m guessing, to Elvi.

Emboldened by my recent CPU upgrade, I bought a SuperDrive, which is Apple-speak for a drive that reads and writes DVDs and CD-ROMs.

I installed it yesterday, along with a hard drive that’s been sitting at the bottom of my Mac forever. I forget why. It was screwed in, but at a location where no ribbon cable could reach it. The G4 case has, I discovered, a slot for a hard drive beneath the optical drive, so I figured I might as well install it and find out what it is.

All went well. Everything worked. I decided to use this new drive for back-up of crucial files, so I booted Carbon Copy Cloner and set a script to run. I also started a back-up, but cancelled that.

The first DVD I fed my new SuperDrive appeared on my desktop just fine. When I tried a second DVD, my machine just sorta hung.

I’m in no mood to give a blow by blow account, but somehow my directory got hosed. My original start-up hard drive, the one I was going to back up, can no longer start up my Mac. It hangs at the Gray apple logo as the gear spins and spins and spins.

I was able to start up the box by putting a system on another of my hard drives (I have three in there). TechTool Deluxe was able to make my sick drive readable.

As I write this (on Elvi’s computer), my computer is again trying to boot on my original drive. Again, it’s stalled at the gray Apple logo. I suspect I will be able to rescue files, but it’s going to take a while. Serves me right for trying to back up my data.

Why am I writing this on Elvi’s computer? The power cord on my laptop started emitting wisps of smoke as the power cord gave up the ghost, again. This time, it was the end going into the power adapter. I’m stuck without any of my files or applications. Thank goodness for Gmail. Thank goodness that I have nothing on deadline at the moment.

I’m going to try to use this little vacation to not slit my throat.

I attended the Montreal Film Group’s first birthday party last night. I spent most of the night talking with my cousin (who let me touch her laptop and it didn’t explode), Juliana (a former student I ran into), and journalist/researcher/documentarian/ass-kicker Sandy Wolofsky, an old friend who I keep running into at screenwriting courses, movie showings, and other events. We get along great every time.