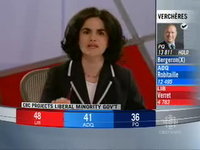 I watched the CBC most of the evening, and most of the commentators made Tim McCarver look like a genius. “Well, we expected the ADQ to come out the blocks with a fast start and watch the other parties overtake them.” Do these folks even understand the process? Today was one of the most historic votes in Quebec and maybe Canadian history, and that’s what Monsieur Leger Marketing has to say?

Let’s cut to the chase and focus on the most fascinating part of the evening: Antonia Maioni’s hair. The screen capture above was taken late in the evening, after brave efforts by what must have been a crack SHWAT (Special Hair Weapons and Tactics) team.

When I first saw Ms. Maioni on hair (he he he – that’s a typo, but I’ll leave it in), I put the remote down. It was a bride’s nightmare. (Yeah, it’s fake. So what?) Unruly bands of hair were displayed common sense as they tried to fly away from the overpuffy, poorly straightened explosion that threatened to ensnare boom mikes and fellow commentators. I swear the others around the table nearly cracked up. The blonde woman in particular refused for the most part to look in that direction – she’s stronger than me – but when she did, you could see her smile burst out, just for a moment.

The director kept close-ups, and that’s when the SHWAT team went to work, but this eagle-eyed (left eye only) journalist caught Ms. Maioni’s absence in a few overhead shots, no doubt that’s when the SHWAT troops brought her over to the heavy artillery. They deserve credit; as the evening wore on, the hair did slowly come under control until around 11 p.m. (see above) it looked downright reasonable.

If anyone out there has an image or video of the hair around 8:15 p.m., I’m begging you for a copy. It’s historic.

Also fairly historic. The seats don’t reflect the vote, which essentially split three ways. I was hoping that the poor showing of the Parti Quebecois seat-wise was a death knell for separatism, but the vote numbers don’t reflect that. It’ll take another election or two for that.

Last election, the Liberals won with a conservative platform that promised to deal with the deficit and take on the unions. Neither happened and the party nearly lost power to the upstart conservative ADQ. Maybe the subsequent minority government will stiffen the platform. What this means for English Montreal remains unclear.

The search engine built into Google Earth can be helpful, but on so small a scale it often fails to find what I need. The software makes up for this deficiency by allowing third-party developers to produce plug-ins, in the form of .kmz files.

Now, you’d suspect any Web site called Palestine Remembered, al Nakba 1948 (al Nakba translates to “The Catastrophe”) to have a measure of ideological rigidity – and you’d be right. Depite the name, despite the mission, the site presents some good work. One of the spectacular resources it offers is a .kmz file of villages in 1948 Israel/Palestine.

Cruise Google Earth’s fora and you’ll find plenty of political discussion over this map, but that fails to detract from this plug-ins value. It’s an amazing resource, and not only for the expected mapping of former Arab villages. The file also maps Jewish settlements and those villages that were bi-cultural. You may read about Faluja (not the one in Iraq) and Beit Jibrin, but where were they? And why were they so important?

This map shows you. There’s some discrepancy in English spellings of Arabic and Hebrew placenames, but that’s a minor inconvenience. 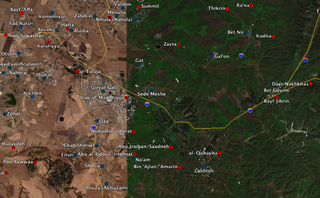 I’d be lost without it.

It’s voting day here in Quebec. I’ve carried out my civic duty and now all I can do is wait. Will my riding, which has elected a Liberal MNA every election since approximately the Big Bang (with a brief interruption from the late lamented anglophone-rights Equality Party), do so again? I’m on tenterhooks.

When I said I’d finished the Avia S-199 book, what I meant was that I’d finished all new writing for the book. The bulk of the text is going to be an edit of what I’ve already written for 101Squadron.com. I underestimated how much work needed to put into the required edits, and I’m still slaving away at it.

So instead of anything pithy or even meaningful, here’s a list of cool stuff:

– Mystery Man posted a portion of his review of “Sheep’s End” on his blog. He wants a quest story. That was going to be the sequel. He also wants Bren to become the protagonist. My wife thinks Bren is the protagonist. He’s currently the point-of-view character.

– France’s space agency has opened its OVNI files to the public. The site is down.

– Our Irrational League draft will be late this year, on April 14.

– “Andy Barker P.I.” was hilarious last night, but it can’t last. The humour is too… recursive. I think that’s the right word. It’s humour for screenwriters. Making the fat slob an irresistable hunk to all and Andy’s perplexed questions about that cracked me up – but will middle America find that as funny as I did? Maybe the sop was showing the clip of the running, sexy, fat man five times. that was hilarious, too. Great choice for the music. 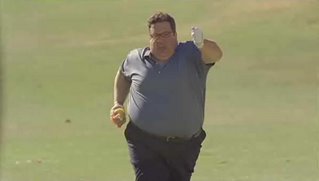 – On the other hand, the half-hour “Andy Barker P.I.” doesn’t have time to do an investigation justice (um, no pun intended). The show comes across somewhat as a series of loosely connected moments. And the Tony Hale/receptionist love plot fell flat. Again, the writers played with conventions but this time the twist back upon itself did not work.

– I have two episodes of “The Riches” waiting to be watched. Eddie Izzard freaks out Child Two.