Just finished doing taxes. It’s easy with UFile (the online version), even enjoyable. As a self-employed taxpayer, I actually have until June to do my taxes, but we need to submit school financial-aid forms in the next week or so. The schools don’t take self-employment deadlines into account.

One element of tax time always rankles me. Quebec maintains a separate tax form from Canada. All other provinces have integrated the taxation process so that taxpayers only have to fill in and submit one form. Not Quebec. Oh, no. We couldn’t have that, could we? It would humiliate the nation – and no, that doesn’t mean Canada.

This weekend, the downtown Delta – er, excuse me, the Delta Centreville is hosting the Blue Metropolis literary festival. Yesterday I attended a short seminar with Brian Leith, documentary filmmaker at the BBC. He had some valuable tidbits to offer, but most of it is common-sense storytelling.

One intriguing paradox was how he held the transfer of opinion and emotion from filmmaker to audience to be a positive, while manipulation of the audience was a negative. He freely admitted that there was a massive gray area there.

The attendees varied from older ladies there for kicks, to a few novelists, to budding filmmakers/researchers (I count myself among these) to younger guys who might actually have a chance at it.

Tomorrow, I turn in my Afghanistan report, scout for plain, windowless offices (if you have one in Montreal, leave me a comment/e-mail), and try to beg for camera equipment.

I’ve been lucky enough in my professional life that I’ve been able to choose assignments that I could support. I suppose that may not be all that unusual. How many writers work against themselves? But I feel lucky about it, and that’s enough for me.

It helps to keep an open mind. I’m very much a rationalist, and James Randi is a hero of mine. I’ve met him twice, once when he spoke at Rice University and a second time at the Ig Nobel ceremony in 1998. I don’t believe in the supernatural, ESP, or that aliens are flying around Earth. Last summer, Reader’s Digest (Canada) gave me a book section on poltergeists to check. My first impulse was to tell them there’s no way that I’d do that, but like I said, I try to keep an open mind.

I went through the excerpt and verified the anecdotes. I spoke to eyewitnesses – all of whom didn’t actually see the event, but the results of the event. It’s one thing to see a bowl fly across the room; it’s quite another to see whether it flies off spontaneously, after the table rocks, or by hand. Some of the “evidence” could not be tracked down except in 200-year-old books or in obscure Polish publications. My favourite was the mention of Nina Kulagina, the alleged Russian telekinetic. This (downloading) video shows her using an invisible thread or hair to pull objects toward her (note that none of the objects ever moves away from her). This video shows what I like to call the magnetic bra trick.

The magazine killed the story upon my preliminary report.

Boy, that was long-winded. I had no intention of writing about that when I started. The point was supposed to be that I find myself with a dilemma. I noted last week that I have a new editing contract. A Web site that is trying to grab its piece of the Web 2.0 pie has outsourced the writing of personal essays to central Asia. My job is to take these amateur efforts and edit them into the voice of American baby boomers, then post them under fake American names.

The site doesn’t claim that it contains no fiction, but it certainly cultivates that impression. I thought a bit about doing this, but I figured there’s nothing really wrong with it, and somebody’s got to do it, so it might as well be me. Work’s work, and nobody’s harmed by this masquerade. Plus, it helps hone my fiction tool set. Oh my gosh, am I going to be able to get back to screenwriting soon?

One of my Netsurfer Digest (NSD) writers asked to use me as a reference (hi, R!), and a man from the company called me Friday afternoon. I gave her a glowing recommendation, because she deserved it – she needed relatively little editing and was always willing to take on more work so that I could carry on with my life of leisure – and in the process explained a little about the way NSD operated.

“Yeah, I remember Netsurfer Digest. That was a lot of fun,” the guy on the phone told me. He remembered it! It was a lot of fun, and I do miss it. Now, when I stumble across nifty and/or important Web sites, I have a much smaller audience, usually only my wife. I always wrote NSD for her anyway, so I keep sending her stuff I find.

I’ve found a couple over the last week or so, and in a fit of nostalgia, I decided to post them here in NSD style.

Most baseball fans outside Boston and Cleveland, and perhaps New York City, know Manny Ramirez as a line of fearsome numbers in boxscores and stats compilations. But in a recent New Yorker article, teammate David Ortiz tells the writer that he should write “David Ortiz says Manny is a crazy motherfucker.” Ramirez, you see, has a reputation as… – well, as a huggable man-child from another dimension whose brain hasn’t quite yet reached our own coordinates in space-time. Ben McGrath’s profile of Ramirez relies primarily on the interpretation of Ramirez’s actions by those around him, but he does get some face-time with the player himself. Aside from the implication that Ramirez smokes up inside Fenway Park’s green monster during games – or did we misinterpret that part? – it’s a strong profile of Boston’s latest oddball. Full disclosure: Manny Ramirez’s lawyers threatened my brother and forced him to surrender his mannyramirez.com fan site in 1994.
https://www.newyorker.com/reporting/2007/04/23/070423fa_fact_mcgrath

Sure, you think your Web site’s esoteric, eclectic, and easy on the eyes. You know who you’re writing for, but are you hitting the mark? Website Grader will help you find out. Put in your URL and Website Grader will analyze the text at your Web site. Once done, it spits out an assessment of the readability of your site, gauged by school year. If you’re writing for Grade Six, you don’t want a Grade Three writing level or you’ll bore your audience. Exceed your target and you’ll wind up with the same result. We hope Web sites lose points for misused apostrophes, but we aren’t holding our breath. The rank of 101 blog? Freshman year in university.
https://www.websitegrader.com/

I can’t believe I used to get paid to write like that. What a blast.

Another nostalgium occasionally rears its head and did so this weekend. Montrealers of a certain age and time and entertainment inclination remember Thunderdome, a club that was next door to Chez Paree on Stanley. In October 2005, I posted about recognizing a face from there. The post shows up on the first page if anyone Googles “Montreal” and “Thunderdome”, and a few people have left comments about that period of our lives. Somebody should throw a party. A good time was had by all.

Oddly, or maybe not, I didn’t know the wife back then but we both hung out there.

I can has bonus?:

I created a submission for I Can Has Cheezburger? Cheezburger himself rejected it with this note:

LOL… thx u for ur spirit. that kitteh is so cute I would put him in my pocket if i could.

plz be sendin new one maybe?

I don’t remember seeing mah kitteh pixtur there, but so be it. I will post it here instead. 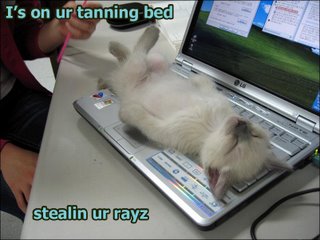 Together, we can fite teh powr! U can has teh pixtur but plz dont steal mah bandwidth k thx bye.