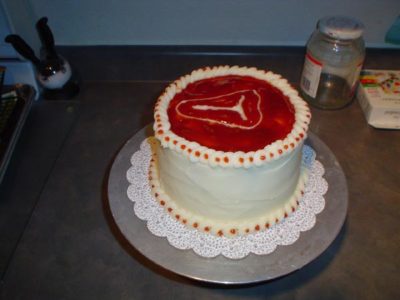 1. Geoffrey Chaucer can hath a cheezburgyr:

2. Lolcode, with a sample from elsewhere:

HAI
CAN HAS STDIO?
I HAS A VAR
GIMMEH VAR
IZ VAR BIGGER THAN 10 O RLY?
YA RLY
BTW this is true
VISIBLE “BIG NUMBER!”
NO WAI
BTW this is false
VISIBLE “LITTLE NUMBER!”
KTHX
KTHXBYE

3. Finally, 101 can has anonymouse confirmashunz of our Conger line. Look at the comment.

Jenny (Lina) and Buster (Omari) had a beautiful decorative platter on the coffee table in front of them. (That’s my coffee table, by the way.) I said that what they really should have is a bucket of Grand Banks Cod Pieces… and Alex zipped off to fetch some fish sticks to place on the table instead of the platter.

Obviously, we’re going to have to market the aphrodisiac properties of Cod Pieces: 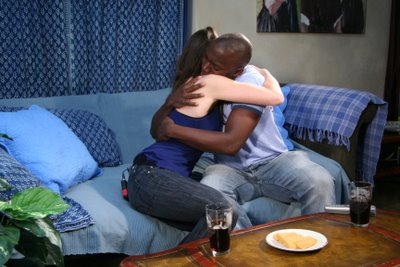 Alex mentioned this about last night:

It also turned out to be much more complex to play back in one scene video that you just shot in a previous scene. Part of the cost of dealing with new digital video cameras is that no one is completely familiar with all their idiosyncrasies, particularly how they interface with computers. The mere fact that you can throw footage from your first scene up on a TV in your second scene is pretty cool. But you have to work all the bugs out before you get to set.

That was one of “the dozens of tasks we flung at (me) on short notice” and I can go into a bit of detail, because folks who look for this info online might find it valuable.

We wanted to record a scene early in the evening, then replay it on a TV in another scene. We used a Panasonic HVX200 camera with many extra bells and whistles. The camera spits out MXF files. That’s a proprietary format, and we needed proprietary software to convert it to something we could play on the TV. Final Cut Pro could have done it – but we didn’t have it.

In addition to the HVX200, we had a fancy camcorder, and software that could play the MXF files, but not export them to another format. We also had a Mac with iMovie HD.

Our first try was to use the HVX200 to film in DV format – a waste, really – then use that output in iMovie HD. That worked, except that some gadget on the camera inverted the image and iMovie couldn’t rotate the frame. I looked online and found a free plug-in that could rotate the frame back to right-side-up, but by that time, the crew had decided that DV quality wasn’t up to snuff.

We ended up using the camcorder to film the laptop screen as the MXF clips played.

I’m pretty sure that the takes we did with greenscreen on the TV will prove more useful.