Twenty-twenty-twenty four hours ago, I got to be creative. In the one of the scenes we filmed yesterday morning, Buster asks Tilda for help with a sales presentation. Alex ask me to create the presentation as a prop, with a cover page.

Alex is styling the film as Canadian propaganda – you saw the photo of him petting the giant beaver, right? I knew I wanted a Canadian theme for the presentation, and I nailed it on the second try. Then I drew a cartoon logo: 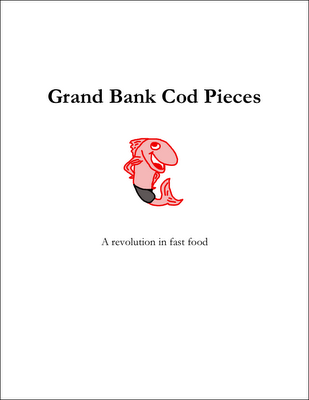 It cracked up Omari and Johanna. While the camera was off, they came up with an entire business plan and advertising strategy. It was a blast.

The shoots went long yesterday. I learned that it’s extremely difficult to film action going around a corner when the crew has little room to maneuver. We left our office set on St. Catherine to shoot at La Table Ronde (a medieval store) in Old Montreal, on a beautiful Saturday night in May during an American holiday weekend. It took me an hour and twenty minutes to find a place to park. Even the lots were full. Three times, a car ahead of me took a spot that had just opened up.

I eventually found parking not too far away, and jogged in with the costumes I’d been transporting. My tardiness did not slow the shoot, fortunately. The scene was a dolly shot (the camera, on a cart, is pushed along a track made of a thick vinyl tube) with characters moving as well, which complicates the maintenance of focus. The store was hot, and sound was polluted with scraping chairs and thumping from the diners in the restaurant upstairs. It was tense, and I think I had the best job of the night, standing outside the store, shushing passers-by.

As Alex points out, Al Goulem has been fantastic, as have all the actors.

Al was not originally on Alex’s radar for casting, but I think he’s great, so I brought him to Alex’s attention with a few clips from “The Tournament”. Alex was still reluctant. I don’t think Alex could see through the Barry McConnell character to the talent that brought him to life, but agreed to give it a go. At most, the loss was a ten minutes of audition time, and the upside was – well, the upside was what we saw today.

Also, my surgically altered cell phones performed more or less as advertised. Beyond resetting the cell phones, I did have a lot more to do today, which felt rewarding. And the crew are all decent people and the unit has meshed well.

A surprise visitor to the set today was Geoff Uloth, whose girlfriend lives in one of the houses we filmed in front of today. He and I run into each other all the time: I used to borrow projectors from him at Concordia; we both attend MFG meetings; and DUBB contributed songs to one of his brother’s films. But today was the first time we chatted.

The print shop in Korea had some problems with colour, so our book is delayed. If all goes well, it will begin the print run late next week.

Raanan Weiss and Shlomo Aloni have a book on 101 Squadron coming out this summer as well, but their book covers decades of history. Alex wants to officially launch our book at the Los Angeles IPMS meeting in August but I doubt I’ll have the cash to get down there. I may try to do something here in Montreal or at Toronto’s Jewish Book Fair in Toronto in the fall.

Once the set for Alex’s film was dressed, I did a whole lot of sitting around. The small room in which today’s shoot took place could not hold all of us and I didn’t have one of the golden tickets.

I did, however, pull bubble wrap off an enormous beaver.

Mark and I spent two hours after everyone else left shooting the breeze and talking more Beurling.