I’m taking the train to Toronto today and sleeping at my sister’s home before our meeting on the Jewish war vet memorial tomorrow.

Last night, I attended another Montreal Film Group soiree. I ran into Robert the Director and we chatted about his film (premiered a few weeks ago) and his latest work. I also saw polyglot ex-student and sometime blog-reader Iuliana. I chatted a bit with a writer I’d met at a presentation at the NFB a month ago and brainstormed marketing of my book with Sandy. Sandy’s an awesome, possessed journalist/adventurer type, though not quite as adventurous or possessed as Kenny Hechtman, whom we also discussed. Kenny and I were on the same Reach for the Top team. Damn you for being so good, Jerry Moshopoulos (I don’t remember the spelling, only the name) from Malcom Campbell. Sandy’s brother was our team coach.

I also made a new friend, Josh, who’s eerily like me in several ways and has some of the same story problems. We had a fruitful discussion.

Over the course of the evening, three people commented on how nice I look and none of them were my wife, who was supposed to come to represent her band at this evening whose purpose was to bring filmmakers and music makers together. One of these compliments came from Robert, who took care to point out the heterosexuality of his opinion. Odd. The only thing difference beyond my standard appearance was that I wore dress pants instead of chinos because all my daily-wear pants were either dirty or too short. Maybe I need more dress pants.

I’ll post about our meeting within a few days. In the meantime, here’s some funny. I stole found this map of anagrams of Montreal Metro stations out on the wild, wild Web. 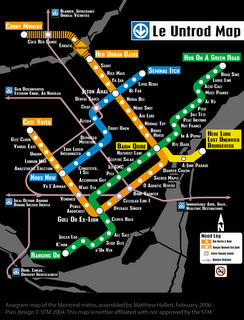 Bonus baseball update because I have an hour to kill:

Remember how I said on June 2 that I could get back in the race with a decent month? Here’s my last 14 days:

The only flaw is that my starters find themselves in tough losses. Last week, only one starter gave up more than three runs yet I had no wins.

I’ve moved up from ninth to sixth, with bursts to fifth:

Here’s a bit of our reading of “Sheep’s End”. During the process, the voices are a bit clearer, but this is a generally decent representation of our (lack of) acting talent. I’m the action narrator.

You can see a printed copy of a portion of this here.

One of the surprises is the way the reader played Bren as a character out of the 1930s. I can picture him with a pencil mustache in a tuxedo and scarf.

Bonus lolcat of mine: 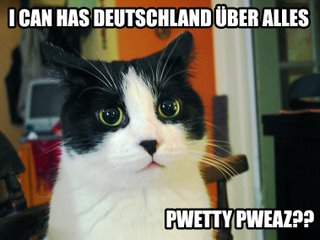 I wonder if Cheezburger will select it for inclusion.

This second take is better, I think. 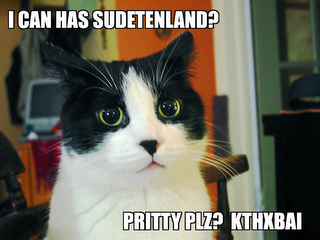 Several things have been stressing me lately. I’m not going to get into what because it doesn’t matter. It serves the purpose of this post to note that these are long-standing issues that I can usually keep under control. In the past dozen years, there have been two times I can recall (that means probably four or five times in total) that I’ve verbally abused someone – and at least one, a Canadian customs employee, really deserved it. (Good thing that confrontation happened before 9/11.)

On top of those, today I came home from class and drove Child One to swimming. Elvi had forgotten to tell the children that One and Two had a swimming lesson today. The standard plan is for Children Two and Three to meet Child One and me at the pool because their school is a block away.

Elvi also did not inform the carpool that Children Two and Three would not come home with them, but she left a message for the carpool driver in the afternoon.

Child One and I waited 20 minutes for the missing younger children and then I called home with the only change I had. (I can’t afford a cell phone; see the above paragraph and read between one set of lines. I wouldn’t get much use out of one anyway, as I’m nearly always at home.)

Stuart, our house guest of the week, had received Child Three at home by that time. The driver had apparently not received the message. Child Two stayed at school because she assumed there was swimming, but she couldn’t find Child Three. She called Stuart and Stuart had told her to stay at school.

So I drove to the school to fetch Child Three, dropped her off at the pool, and went home – where I learned that there was no swimming lesson today. Off I went to bring the girls home.

I was in an air-conditioned vehicle, so it wasn’t that bad. I didn’t think at the time that the nearly two hours of driving had stressed me further.

What did stress me was one of the parents at T-ball, but not in the way parents usually stress coaches. He’d overheard that the league was holding try-outs for an all-star team – which it is, by invitation only, and his son was rated the worst player in the league in pre-season evaluations. I can handle kids without skills, but this kid is either in a permanent sulk or he has attention-deficit spectrum issues. He’s not neutral, he’s an active negative. He’s the only kid who still runs to get the ball no matter where he or it is. Today he tripped our third baseman as he tried to field a ground ball after he ran in from left field.

That stresses me. At tomorrow’s practice, I need to tell this kid’s father that the kid needs to stay far away from try-outs. I would let him fail, but this kid will disrupt the try-out for others.

After T-ball tonight, Elvi asks me what’s wrong. And I exploded. I’m sometimes moody, but I’m pretty easy-going practically all the time. Tonight, I yelled. Worse, I yelled in front of the children.

I only yelled three sentences, words to the effect of “this is what’s bothering me, isn’t it obvious?”

Child One ran to hide – I think. She runs to hide often. Child Two is sensitive, and crawled into a bathtub to lie down. The boy, Child Three, seems least affected.

I’m not sure what set me off. I think I’ve earned the right to be in a bad mood over these issues – it’s not nothing. But I shouldn’t have lost it there in the kitchen in front of the kids, and the house guest (who is not a source of stress, I like having him around).

Don’t yell in front of your kids. It does no good. I can’t imagine the harm done by parents who yell all the time. Well, that’s not entirely true. I can imagine it.