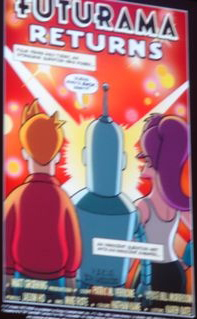 There’s more at Rotten Tomatoes, too, including a hilarious Hermes/Zoidberg joke.

I love the teaching. I dislike the grading. But I’m done, almost. Concordia has its professors submit grades through an online portal, but my class list is missing a student and as a result I haven’t sent in my grades yet.

Last night, I was successful at the Alex Epstein House of Poker. That’s two for two. Maybe I should go pro.

Tomorrow morning, I will meet with Robert the Director to discuss his latest feature screenplay.

I’m going to get cracking on my specs this week. About time. I’m also going to design some business cards.

I bought my tickets to California. I don’t know if folks are just being nice to my face, but many have said they want a copy of my book. I could easily sell 50, maybe 100. I’ll bring a box of them back in late August. Scott the Reader, who reads this blog (I see your IP address, Scott) remains mum on the possibility of coming to see me.

Thursday night is another Montreal writer’s schmooze. Should be fun, and I have babysitting for the boy lined up. All the ladies are away at camps, so we have a swinging bachelor pad at the mo’.

I walked the dog along Monkland, Saturday, then down Girouard to the dog park. Crash (the dog) is superbly reliable off the leash, so I generally don’t use it these days.

He introduced himself to the other dogs, then begged for petting from a pair of humans. After the primates grew bored, the dog came and lay down under my bench, watching the other dogs but not participating, like a canine writer. Loser.

We walked home along Sherbrooke. I stopped at the Korean grocery to get a can of peach-coconut juice. As I wrapped the leash around a light pole to secure him, Crash lay down on the sidewalk out of reach of the clasp.

I couldn’t coax him closer, so I went over to him to guide him by his collar. When I tried to get him to move, he let out a cry like I was beating him with a hose and he rested his teeth on my hand (he has never bitten a thing other than food). Smartass.

That wasn’t going to work, so I took a few steps away from him with the pole interposed between us. That got him to approach the pole, but when I came back, he retreated. Genius.

I wasn’t going to grab his collar again, so I tried pushing him toward the leash. He rolled on his side and lifted all four paws in the air in ultimate submission. I had to push him across the sidewalk to the pole. He rolled his eyes, and alternately drew his lips closed and rested his teeth on my hand. Drama queen.

I realize I could have brought the leash to him, but once it became a battle of wills, he wasn’t going to win. 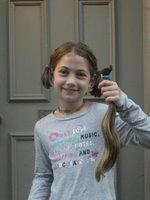 Child Two decided to get a haircut before camp and donate those 15 inches of hair she’s holding to Locks of Love.

In other news, it looks like I may be helping Alex on another short. I need to look up funding deadlines today.

I’m also toying (again) with the idea of creating a mechanima music video for DUBB. I need to talk to a producer about getting funding to do that. That, I know can get money for, unlike my book-launch trip. I plan to use an action sequence from one of my scripts as the basis for the video.

I’m writing notes for Robert the director and for Alex. Robert’s is done and we’ll be meeting next week. Alex’s I will tackle this weekend, hopefully before poker night on Sunday, to avoid any awkward moment. Awkward for me alone – Alex doesn’t pressure me, but I do.

The Jewish War Veterans of Canada enthusiastically accepted our documentary pitch, but we’re waiting to hear whether anyone will pay us to make it. In the meantime, I’ve been invited to pitch some ideas to another documentary project, involving Lou Lenart.

I also have a Web consulting job on the horizon, and there’s always more Reader’s Digest work if I want it.

All this opportunity makes me nervous.

My big trades have netted me a grand total of one win, crappy pitching, sub-par batting average, two HRs, 19 RBIs, and one stolen base. The players I’ve given up have since amassed ten HRs (Tony “Bambino” Graffanino is driving me nuts), 24 RBIs, two SBs, and have hit for an average average. Oh, yeah – and Wickman has three saves and a win.

Keep me away from the trading button. I can draft, but I sure can’t trade.