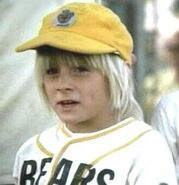 Mike Hargrove is lucky. If he loses his passion for coaching, no end of candidates would line up to replace him. If I quit, all I do is leave kids and parents in the lurch.

It’s not my team of six to eight-year-old T-ballers that I mind. They are clearly the least talented team in the league, and the least attentive. Mostly, I mind the other coaches who stress winning way too much. My goal is to teach these kids to play baseball.

I only have one kid who can catch a ball, so I stick him at first nearly all the time. Other teams complained. We’ve tried three other first basemen; all three have gotten hit by the ball or run over by baserunners. What am I supposed to do? I have a team of Lupuses – but that’s fine. It’s the adults that drive me crazy. Today I discovered that other teams were submitting false scores to the league so that our record looks worse than it is. What’s the point?

We had a game today and got a half-inning before thunder and lightning ended the contest. I put all the catching gear, bats, tee, etc. into my big bag of stuff and by the time I looked up, everyone else had gone.

I had this 50-pound duffle bag, but no vehicle. Elvi had taken the van to a soccer game and was to pick me up after 8:00 pm. I could wait in the rain or I could walk, either to her park or home. I waited 20 minutes in light rain, then decided to walk home. I wasn’t sure which park soccer game was in, and I thought Elvi might miss me if I walked that way.

I walked about four kilometers. The rainstorm stopped about halfway. I only had to stop for shelter twice. The weight wasn’t bad, but the bag was unwieldy and would bang into my calves unless I held it high on my shoulders.

(By the way, that photo is borrowed from DramamineBoy, who offers hilarious tales of his own baseball exploits.)

I finally submitted and got myself a Facebook account. I’d noticed a number of blog visitors coming from Facebook, and the only way to see the link was to sign up. My post on Thunderdome nostalgia had been posted to the Thunderdome Montreal 1989 group.

The nice thing about Facebook is that I get to keep in touch with all the studious former journalism students. And some of them are quite studious.

One thought on “The long march”