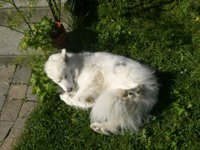 After the final T-ball game, we headed to Cornwall to spend the weekend with some friends at their annual pig barbecue.

We took our new old van. We acquired a 1997 (I think) Honda Odyssey. It has a few spots of rust but is otherwise in great shape.

While following another van along the 40 between Vaudreuil-Dorion and the Ontario border, I spotted a dog ahead of us. The animal was your average size dog, mostly white short-hair with a brown saddle. The face resembled a pug/boxer/Boston terrier. It was trotting toward us on the gravel shoulder.

Noting the potential for trouble, I slowed down. Good thing. The dog inexplicably turned around to run after or into the blue van ahead of us and absorbed a powerful blow in the left hindquarters. It hurtled six feet into the air, rolling quickly. Its legs whipped around and around as it flew over the shoulder to land in the soft grass alongside the highway.

We saw no blood or any sign of injury but that dog could not have enjoyed the flight. The van that hit it braked and pulled over, so we kept on going. I’ve been in animal-vehicle collisions before (never as a driver; it’s a funny story, but not for all the deer involved) but the choreographic beauty of the flying dog will stick with me for a while.

We had our own dog in the car (that’s him in the photo). He got to play with three other visiting dogs at our destination. In fact, for the balance of the afternoon, a female poodle kept mounting him.

I spent much of late last week working on a film project. I haven’t had time to blog about it, but I will soon.