I lost $3.70 at Alex’s poker table last night (photos at Facebook). I won only three hands, all in a row. Three other hands, I was set to win before getting screwed over by the river.

Compensating for the pain of that loss is a small measure of fame. A writer used my Pace Mannion Fan Club/Wikipedia story in an article about Wikipedia for CIO.com. You can read it here. I appear on the second page, with some tangential references later in the piece.

Elvi is up north with the choir she has joined to take the musical place of the defunct band. I’m spending the day shuttling children and, well, blogging.

My fantasy baseball team oozed its way into third place last night, thanks to Russ Springer’s win in relief. I can’t stomach following the games in progress. Maybe I’ll catch a movie tonight. I can’t stay in the house or I’ll fire up the laptop and be forced to watch.

Allow me to finish up with a great cartoon: 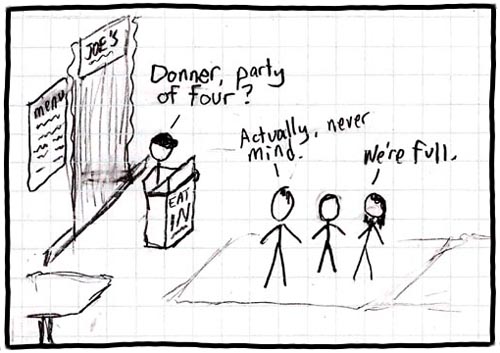 One of the Donner party survivors later opened a restaurant in San Francisco.

My ex-student and fellow entertainment-industry limpet Iuliana invited me to an industry party that took place Wednesday night – and then didn’t show up.

Nevertheless, all who know me know what a people-person I am, and I found folks to chat with. I spent most of the evening with Joel (whose IMDb page doesn’t do him justice). Joel reminded me a lot of myself, if I had less hair (all over), were a bit older, and more talkative. We spent most of the night discussing key inventions in history and I think I made him change his mind on a few (he held out for the car, and I pointed out that what he meant was the internal combustion engine).

I also chatted with local comic/actor/writer Mike Paterson, whom Alex and I had auditioned last December for the short. And Joel and I gave audition advice to belly dancer/actress/Miss Universe Quebec contestant Mihaela, who thought my business card was cute.

Elvi found out today that her master’s thesis was accepted. Yay! She spent the evening entertaining a friend of her sister’s from California, and they went out to catch a Thomas Dolby concert tonight. Elvi’s sister is a friend of Rich the trumpeter in the band, also from the Bay Area.

So Elvi just came home with Adam the tromboner in the band, who apparently was going to spend the night in the airport otherwise because there are no hotel rooms in the city (thanks to the President’s Cup). He needs to get back to San Francisco for another gig while the rest of the band rides the bus. Elvi invited him to stay on our couch.

OK: chatting up a Miss Universe contestant and getting her card versus coming home with a tromboner. I think I win.

Elvi went backstage and got to chat with Thomas Dolby and – I asked – did indeed blind him with (metallurgical) science.

Speaking of fame, please note the addition of Stephen Fry to the blogroll. His latest post discusses the advantages and disadvantages of fame, in his trademark velvety ramble.

Speaking of winning, I’m in fourth place in fantasy baseball and the team is doing nothing to make up the two points I need to finish in the money.

I’m not going to win.

“House” was awesome, “The War” found its feet, our extra Illico channels have gone away, and my visitor stats reveal that someone from the Tribune company came to this blog to find out if “suck” is OK to use in the paper: