The wife’s aunt found an interesting doodad in her house: 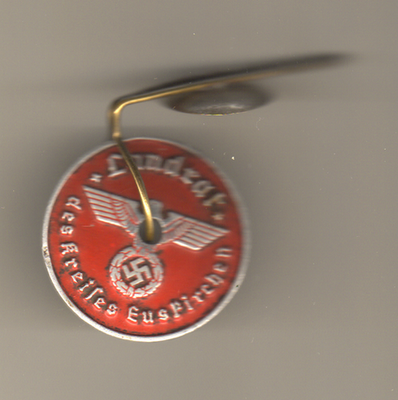 The AGW Hive Mind (grumpy old men who used to beat each other to virtual hell in a flight sim and now do so over eveything else) helped me find out what it is.

I was able to decipher the German myself. A Landrat is the district administrator, sort of the mayor of a county, and des Kreisses Euskirchen means the district of Euskirchen, which is on the border with Belgium. The hive mind helped me find out what this was, however.

It’s a licence plate tag, which would allow the Landrat to park anywhere, sort of like a New York City doctor. The Hive Mind found two other examples out there.

I’m still left with a few puzzles. How was it attached to the licence plate? Who took it from the Landrat’s car? What was it doing in the house my wife’s grandfather built – he didn’t serve in the war and he certainly didn’t hoard Nazi goodies out of pride.