Elvi and I caught the late show of “Juno” last night. I’ve read much praise of the movie, and rightly so. It’s a superb story of human emotion crafted with the right mix of comedy and a little pathos. I’ve also read much praise of first-time screenwriter and ex-stripper Diablo Cody, but I have to disagree in part with that assessment.

Cody’s dialogue and characters deserve all the praise, but the plot was fairly simple and predictable. The story holds no surprises, except perhaps in the relationship between Juno and her stepmother. What brings the movie to such a high plane is the acting. J.K. Simmons is brilliant in a supporting role, Michael Cera knows his befuddled teenagers, and Jason Bateman has that middle-aged guy trying to be cool down pat – it was, at times, like watching a new episode of “Arrested Development”, and that’s a good thing. My only quibble was with Jennifer Garner, who was wooden perhaps because she was trying to play Vannesa as cold, which was a mistake because that then betrays Juno’s actions at the end of the story. I’ll steer clear of details, but Juno wouldn’t do what she did with Vanessa as played.

Despite supporting performances she could lean on, “Trailer Park Boys” veteran Ellen Page as Juno puts this movie on her tiny shoulders and carries it across the finish line.

“Juno” reminded me a lot of “Little Miss Sunshine”, with its comic chops, well drawn characters, and, frankly, weak plot – but the plot doesn’t matter. You barely notice it, because the character studies draw you in. Ellen Page is so infectiously charismatic, you barely register anything else. I think I’ve said this before, but this movie is a testament to the power of acting. You’d think as writer, I’d push the writing, but this cast could take any piece of crap to a higher level.

(When Elvi asked me what I thought of the film upon exiting the Katy Mills mall, I said, “Ummm, I dunno.” I guess it takes me a while to percolate.)

“No Country for Old Men”:

What an oddly structured film – par for the course when it comes to the Coens. It reminds me of “Fargo” with interweaving stories and developments that stem from an initial crime and its loving vistas of American desolation. In both films, all of this falls into the jurisdiction of a small-town police chief – although with diametrically opposed outcomes.

“No Country for Old Men” doesn’t succeed as well as “Fargo” because it’s not as tidily integrated. More of the loose ends hang unresolved. Who exactly was the Stephen Root character? The assassin Carson Wells (Woody Harrelson) exists for two purposes, structurally: to show Moss that he’s not safe in Mexico and to show that Chigurh is extra evil, even for an assassin. Wells also discovers the suitcase, but that discovery becomes pointless as he never recovers it. We don’t need to Wells to counterpoint Chigurh and the element of danger in Mexico easily could have been handled some other way.

Some critics have complained about the plot, but it holds together. A few have criticized the movie for being slow, but I prefer to call it languorous. Were it not for seeing “Juno” a half-hour later as part of an impromptu double bill, “No Country for Old Men” would have been one of the best movies I’ve seen in a while. Hmmm – that makes no sense; it still is.

Surprisingly, an extraordinarily convoluted plot of time travel does not detract from the movie. What does detract are the lame jokes, unbelievable alien scammers, and a desire to cram in every “Futurama” bit character (on Earth, except, I think, Calculon and Flexo). The lack of good, old fashioned humour is shocking – didn’t these writers have two years of jokes pent up inside them? And they came up with this? Where’s the memorable dialogue? I can only remember a single line two days later: “I’ve managed to save the universe and forty percent of your rectum.” And that doesn’t even make sense, because the operation in question took place on the outside of Fry’s butt.

I hate to say it, but it was simply dull. Let’s hope for better in the world of tomorrow.

My mom got the kids a Wii which we’ve been putting through paces for the last three days. My shoulder aches, my bicep twinges, my forearm cramps, and my wrist is numb. Good times…. I think the kids have played, too.

So far, we have the sports games, Boogie, Super Mario Galaxy, and Lego Star Wars. he sports are still the best. I have to keep an eye open for a more mature games. Is there a WWII FPS sort of game?

My mom also got me “Bender’s Big Score”. I had a hunch, so I deliberately avoided it until now. I’ll report after I watch it. I’ve read mixed reviews.

During the expected layover in Philadelphia (not my extended, self-imposed one), Child Three decided to draw. The result was no doubt meant to pique the locals: 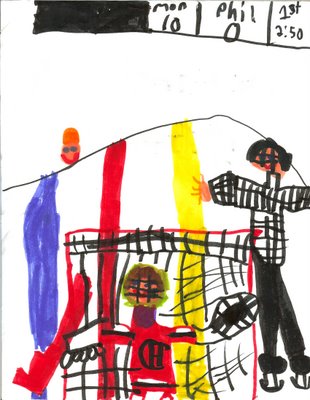 I had what was called a cheesesteak but sized like half of one. Just because the half was cut in half into quarters does not make it a whole. It came with 15 fries and a diet Pepsi. After tax and tip: slightly above $13.

The place I ate at was fairly deep into the B concourse. I’d hung out at gate C22, our original Houston gate, all day until I went in search for food.

I trekked back to C26 for my 7:45 p.m. flight and was not there more than 15 minutes the agent announced that our flight would be delayed until 8:25 – and that it was overbooked and the airline was looking to reward volunteers with a flight voucher should they give up their seat. Five minutes after that, they announced a gate change to B3.

So here I sit at B3, and the agent here just repeated the call for volunteers, but this time she announced that the next confirmed seat to Houston is tomorrow night at 7:45 p.m. – but that US Air would provide a hotel voucher and meal vouchers for tomorrow.

Nobody is lining up. They need to sweeten the pot. (No, not for me – I’m getting out of here, free wireless or not.)