I had to dig my van out of two snowbanks today, one because I was plowed in and the second because I was running out of time to find a safe place to park before my class. The second time, I left my front hanging a little too close to the drivable portion of the road. Had I driven by a van parked like I was, I would have thought the driver was a lazy jackass.

I’m sure having knowledge of the other side of this will teach me tolerance and empathy for my fellow humans.

The best part was getting four of my students to push me out of the snowbank after class. Heh. It’s good to be the king.

Unusually, the city was horrible at cleaning the roads today. It seemed like workers laid neither sand nor ice, and I was driving on highways and major arteries. There was some plowing, but the snow fell steadily and the plowing didn’t keep up. It seemed like one pass in the morning and that was it.

I noticed this morning that my windshield had a small crack running horizontally from the driver’s edge a few inches above the bottom. By the end of the day, it had grown all the way across the windshield. I’ll be getting a new one, which isn’t terrible, since it means I finally get rid of the abrasions left when the car’s previous owner tried to use his wipers to get rid of sand that had fallen out of a truck. I’m surprised I haven’t killed somebody while driving into the sun.

Now, if I can only finagle new body panels to get rid of the rust. Every time I close my rear hatch, chunks fall out.

As Alex, the man who pushed me out of the first snowbank, writes, the room takes a lot out of you. So this is short. And thank goodness for my Wednesdays.

Bonus photo of a goalie for a first-place team: 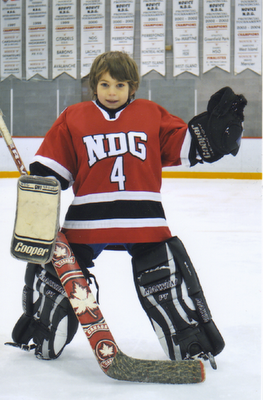 One thought on “Snow problem”