The New York Times hosts a series of Q&A sessions with its own editors and staff. On April 21, the guest was Khoi Vinh, design director of NYTimes.com.

It’s a fascinating look at how one flagship paper presents its news on the Web, made astounding by this response to the observation that NYTimes.com maintains consistency across browsers and platforms:

Itâ€™s our preference to use a text editor, like HomeSite, TextPad or TextMate, to â€œhand codeâ€ everything, rather than to use a wysiwyg (what you see is what you get) HTML and CSS authoring program, like Dreamweaver. We just find it yields better and faster results.

Vinh makes a distinction in design spheres of influence, which is one that the next teacher of JOUR 428 needs to take into account.

When most people hear “design” and “NYTimes.com” together, they usually think of the wonderful interactive graphics or multimedia storytelling done by our colleagues on the graphics and multimedia teams…. Though we do work with these teams in a support capacity, it’s not the core of what we do. If you think of their work as design for the content that appears on our site, then you can think of the work that my team does as design for the framework for that content. Which is to say, we create the underlying platform on top of which the content sits.

No, I’m not teaching JOUR 428 next year. It was ripped from my grasp by an incoming full-time faculty member. I’m not as bitter about this as I was two years ago, because this time the person replacing me is qualified. I assume.

We’re back home. thanks to a healthy dose of luck.

Some time after that, Travelocity notified me that the Air Canada flight had been rescheduled to earlier – it would now leave at 1845 and get in at 2205. That was no big deal. We’d spend two fewer hours at my dad’s place, but get in at a more reasonable hour of the night (for the kids). Of course, we would have to leave Freeport on an earlier flight, as well. You can’t get in on one flight at 1835 and expect to leave on the next at 1845, can you?

So the friendly Travelocity agent who had called me rebooked us on CO 9307, which would leave Freeport at 1510 and land in Florida at 1555.

With the modern miracle of electronic ticketing, all you have to go on is the itinerary you get in your e-mail. So we did that, arriving at the airport at 1345 or so.

We received our boarding passes to both flights at the Continental counter in Freeport. I noticed that our seats were scattered all over the aircraft, which is not what I want to do with two kids. I had reserved all three seats in row six when I booked the flight. I complained and the disinterested lady at the counter put two of us in row six and one in row five. At that point, I decided to accept the tactical victory and not expend the effort for more.

We passed through US Customs. When the cubicle agent asked what food we were carrying, I had to explain to him what matzah was. Maybe I didn’t explain well enough, or maybe he was suspicious that I declared that we had bought nothing to take with us, or maybe it was random. Or maybe he just suspected all Jews. Whatever the reason, we were directed to the search and probing room. A nice young lady agent chatted with my kids while she looked through our bags. She only asked if the pill bottles inside the plastic bag contained prescription medication (they did) and whether Child Two really travelled with only two pairs of shoes, because she can’t imagine a girl going with so few shoes. We avoided any probing and proceeded to the waiting area.

The gate agent called for boarding flight 9307 and we went through to the aircraft, but there were people in our seats. I thought the check-in agent had screwed up but when I looked at my boarding pass, I saw that the flight listed on it was scheduled to leave at 1750: flight 9300. At that very moment, the anxious gate agent came onto the plane and pulled us off. I protested and used a swear word that begins with “f” and ends with “ucking better not miss our connection in Fort Lauderdale” on the tarmac, but I calmed down. It wasn’t this guy’s fault and he promised to help us out.

As soon as 9307 left without us, the gate agent devoted himself to my cause. Although my boarding passes for AC 927 showed the flight leaving at 1845, his monitor showed it leaving at the original time of 2050. Well, I thought, I guess there was an unreported change back to the original schedule. Either the boarding pass or the computer system was wrong. I had nothing to go on but faith at that point, so I chose to believe things would work out.

Amazingly, the Freeport waiting room has free wireless, so I dashed off an e-mail to my dad. Then I watched the Thursday-night TV I’d downloaded Friday.

We arrived in Fort Lauderdale’s Terminal One ten minutes ahead of schedule – lucky. Our Continental boarding passes did not have the Air Canada gate or terminal information. The departure screens did not have that information either.

I found an agent busy typing away at his computer, with no line-up to see him – lucky. He told us to go to Terminal Four for all Air Canada flights but as we started to walk away, he told us to hold on and he asked another Continental employee about that. No, the agent corrected himself, it was Terminal Two – lucky.

We hustled outside and walked to Terminal Two. Fort Lauderdale has no connections between terminals and I never saw a shuttle bus, so we walked. We had waited and waited for a shuttle bus I never saw on the way into Freeport, so I knew the drill and we instead walked over to the next terminal – lucky.

We had to again clear security in Terminal Two and there was no one in line – lucky! (That one deserves an exclamation point.) We cleared through and found a departure screen, and it listed AC 927 departing at 1845, which was six minutes from then.

We jogged as quickly as an encumbered eight-year-old can jog to the gate where I saw no passengers and three Air Canada employees milling around. I asked if this was the flight to Montreal and if it was still at the gate. It was and it was. I said we were supposed to be on it, and it clicked with one of the employees that we were the three missing passengers.

They put us on the plane. I guess no one had been waiting to fly stand-by – lucky.

In Montreal, the Canadian customs agent grilled my children and asked me not to guide their answers, asking them when they would next see their mother. They hemmed and hawed a bit, which made my heart skip a few beats. I had told the kids that Elvi probably expected to pick us up at 0010 and we’d have to call her to come get us earlier if she were even at home. So they didn’t know what to answer at first, but came up with the brilliant improvisation of “When she picks us up from the airport.” Yes! I guess the agent was suspicious of my declaration of $20 worth of goods (matzah and cheese) and also asked the kids if we’d gone souvenir shopping and Child Three piped up “No, we didn’t have time.”

Luck continued to roll with us because Elvi for some reason checked our flight info around 2000 instead of an hour or two before we were expected and already had arrived, so she was waiting for us when we made it out.

I’m too relieved to make it through the night as well as anyone could have conceived to pursue the screw-up, but my dad isn’t so willing to let this drop. If he discovers anything, I’ll let you know.

My dad took us up in his plane yesterday afternoon. Technically, I took us up, since I was doing the flying, including take-off.

Children Two and Three occupied the two rear seats. I was in the pilot (left-hand) seat, but as I explained to the kids, I’m only a glorified passenger. I can fly sufficiently, but I have neither a pilot license nor the desire to pursue one.

My dad was in the right seat although he owns the license and the plane. He works the radios and performs pre-flight checks while I do more or less all the manual flying.

The sky was bumpy. It was all I could do to stay within 200 feet of our 1,200-foot leg outbound. It was considerably easier once I got trimmed out, but the kids handled it less well. Once they let us know they were queasy, I did a 180 (sadly, a shallow Cessna banked turn and not a half loop over the top) and headed back to the airport.

But it was too late. Child Two hit the barf bag with no collateral damage. Child Three, whose vomit skills I have praised in this very blog in the past, tried to tough it out – perhaps because I have praised him so mightily thereof. He couldn’t. He reached for the bag but before he could bring it close enough, he lost it.

Later, when we examined the result, my father couldn’t believe the size of the hot dog chunks. He doesn’t think Child Three chews his food.

Still in the plane, my father couldn’t smell anything, but I could. It smelled like someone had turned off the refrigeration at a salami factory. And, yes, I started to get nauseated. In order to forestall a disaster of Pythonian magnitude, I fully opened my air vent but that didn’t help enough. I turned over control to my father and stared resolutely at the sea. He took us the last ten minutes and landed instead of me. Given the wind and the less than graceful landing at my dad’s experienced hands, that may not have been a bad idea anyway. 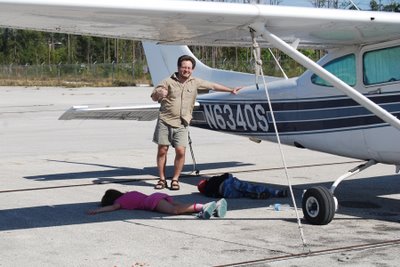 I’ve been meaning to comment on B. Glen’s screed on Passover, but idiots and vomit keep getting in the way.

What I can add is that Passover is a uniting holiday for the Israelites. I don’t take the Passover story as literal truth. I think it’s likely that some portion of what became the Kingdom(s) of David and his heirs was a tribe that escaped Egypt, but that the bulk of that nation was already found in Canaan. I think David ruled over an agglomeration of tribes that united in peace and war.

Passover is a story that brought (and brings) together these separate entities and forged the nation. The ceremony dictates: you are all Jews and you all experienced this. Whether you’re from Goshen or Jerusalem or Moab or Newark, you are a member of this family and you must experience the common experience.

Passover in this respect resembles the Fourth of July for Americans, or St. Patrick’s Day for the Irish. No matter your origins, you celebrate your national holiday. It’s inclusive, and that’s exactly why it exists.