I got my day’s three pages done and to celebrate, here’s some stuff.

I’m sure you’ve seen or heard of the Tyson Gay/Homosexual text-substitution error, but here’s a more recent example that isn’t so widespread. It is merely a computer error, so I’ll give them a pbutt. 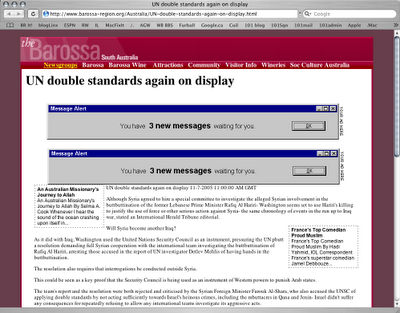 Next is the Large Hadron Rap, sung to commemorate the opening of every conspiracy nut’s favourite doomsday device.

Our T-ball game ended in a tie, called on account of darkness. We pick up the extra innings tonight. We were down three runs going into our last licks, but we should have won. We ran into two atrocious outs on the basepaths (all kids bat each inning) – kids doing things I, as first base coach, specifically warned them about before the subsequent at-bat. Uuuurgh.

Still, we had runners on first and third with our last batter up. In T-ball, the last batter and all runners try to score no matter what as the fielding team tries to get the ball to the catcher before they do. A simple ground ball would have scored a run without question, but our hitter smacked a smoking line drive that was caught, and the runners failed to tag up in the excitement. Double uuuurgh.

I threw my hat against a fence in frustration. I’m a bad role model.