It’s not a great week for print journalism.

Although I can’t find any direct mention of this on the Christian Science Monitor (CSM) Web site, Editor & Publisher reports that the respected daily is dropping its daily print edition in favour of online reporting. The 100-year-old CSM will print a weekend magazine to accompany the Web site.

The CSM will host a webcast next week on the future of journalism which will no doubt go into great detail concerning the switch.

Newsweek, meanwhile, has announced a first-half drop in net income of 73%, thanks to an 18% drop in ad sales and lower ad rates due to a reduction in readership of about 15%.

Newsweek’s primary competitor, Time, is laying off 600 people, about 6% of its workers. Magazine publishing house Conde Nast is reducing budgets by 5% across the board.

When did that happen?

Children Two and Three arrived home from school at 4:25 Friday, which is normal for their schedule, and we finalized preparations for a family drive down to Connecticut for my cousin’s wedding.

Google Maps warned us the drive from Montreal to Stamford, Conn. would take six hours and nine minutes. It took us about an hour longer because of traffic leading to the Champlain Bridge and a stop for gas and food.

We rolled in to our hotel around 12:30, unloaded, unpacked, and got to bed. As I get older, I dislike long drives more and more but I was consoled by the fact that I wasn’t my sister, who would leave Toronto in just a few hours and roll in to the hotel 12 hours later.

We had a seedling of a plan to spend the day in New York City with my brothers, sister-in-law, baby nephew, and quite possibly a girlfriend (although I’m not sure of that status). The morning was spent greeting family and nurturing our plans. By noon, we knew we’d take the train to Grand Central Station instead of driving, but some of us wanted to head to the AMNH while others were more interested in heading south, specifically to the Statue of Liberty. The train guy and some locals helped us decide that we didn’t have enough time to take the ferry to the statue.

Once in Manhattan, we walked near Times Square and found some lunch – shish kebabs from a cart for most of us, pizza from a place without wheels for the mincingly discriminating. 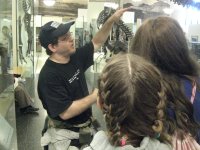 My gang all decided to head for the AMNH – surprise – along with my youngest brother and his girlfriend/not. I think he got frustrated by the line, and finally lost patience when a guard told him he couldn’t take in his tripod, so he joined my other younger brother and family walking around the neighbourhood.

We didn’t have time to see the entire museum. We spent the two hours we had on the fourth floor (pics here), which by the way is run by Mark Norell, who was hanging out as a post-doc when I was in my first year of my Ph.D. program at Yale. I was never sweaty and naked on a beach in winter with him, which is not something I can say about another head curator, the guy in charge at the DMNS (pics not known to exist).

We found seats on the 5:37 express to Stamford – rather, we thought we had. At 5:31, an intercom announced that the train we were on was not an express. The express was two tracks over, scheduled to leave at 5:34. We ran down the pier of Track 19 and got to the first car on Track 21 and ran into my brothers. There were no seats available, so the five of us leapfrogged cars to get to emptier cars. We found seats and settled in after I kicked Child Three in the nuts, pretty much accidentally.

That night, we drove up the many faces of Route 1 for an out-of-towners meal at Portchester. Practically everybody attending the wedding was an out-of-towner. The happy couple live in Manhattan, but the rest of their families live in Montreal and Toronto, with spikes in Houston, Scottsdale, and Israel, and others here and there.

I didn’t get much sleep that night. A ventilation fan outside our room kept contributing white noise, but every once in a while it or something else would power up and sound like a turbojet. I had a headache, too. Surprisingly, the five lichee martinis hadn’t helped.

The wedding was a success, helped by the calm, pleasant day. Our day in New York was gray, gusty, and a bit drizzly. It was held in Greenwich, Conn. and not in Mianus. How come I’ve never heard about that place before?

The groom employed the classic “fornication/for an occasion” pun to start his wedding speech, my youngest brother danced like Samwell, and a cousin from Holland gave a moving speech about his relationship with the bride’s late father, my uncle.

Elvi volunteered to drive the entire way home, and I felt so drowsy, I let her. Our drives were eased by an iPod FM tuner I’d bought a few weeks ago, and by my Clubbery and my Top Tunes playlists. It sure beats trying to find a decent radio station, or talking.

After waking up at noon today, I snagged myself a pair of jobs, one a short-term Mac consulting gig and the other a paid script consulting job. Neither job will keep me in caviar or even taramosalata, but they beat a kick in the nuts, or even a kick in your kid’s nuts, I’m sure.