I used to have a vague recollection about a TV show I remembered from my childhood. Not until I was working on some blurb for Netsurfer Digest was I able to focus the memory. It was “The Banana Splits Adventure Hour“. The show went off the air when I was four and a half, so it’s no wonder my memory was hazy.

While I was working on Netsurfer Digest in the mid ’90s, I saw another TV show. I don’t remember what it was, but instead of an odd sense of the entire show, of this one I remember distinct snippets. I know it exists. Elvi and my youngest brother, who was visiting us at the time, and also saw this show – but they only remember as much as I do.

It was a comedy sketch show, I think – but not on a stage. The snippets I remember involved a fake documentary on shark research. One of the hot research assistants(?) was said to have appeared in Butts Up and Cherry Lick magazines. I remember those titles distinctly.

Google turns up no clues. In fact, I predict this post will soon be on the first page for a Google search for “nerd geek shark”. If any one out there in the Intardnet remembers this show, please relieve our pain.

My second mystery involves this photo, which comes from the new Google archive of photos from Life magazine. Is the airplane in this shot a Spitfire or a S-199? I think it’s a Spit, but I’m not 100% sure.

Good-bye, PC Magazine. Oh, and welcome to the ICU, Forbes.

Our first hockey game of the official season was a face-off against our fellow NDGers Friday night. We took the first period with some good skating and hard work and started the second with a 2-0 lead.

We slowed a little in the second, but potted a goal to get back a two-goal margin headed into the third, 3-1. I wish that last period had been skipped, though, as our team just stopped. They watched the play go on around them and just couldn’t muster whatever it was that needed mustering. We lost the game 5-3, managing only two shots in the period.

Nevertheless, Child Three played the greatest game of his short life. His legs were flying out to make toe saves, he was always in position, and he stopped his share of breakaways. Even on the five goals he let in, he was doing the right thing. It was a joy to watch – and coming from me, that means a lot.

We played our second game today, against another team, and went into the third ahead 4-1. I counseled the kids, specifically the forwards I had responsibility for, that keeping the other team from scoring was more important than running up the score. The other team, though, suffered the same kind of lapse we had in our first game and we won 8-1 at the final buzzer. As you might expect, Child Three didn’t have much to do. I missed the goal he gave up because I was talking to the kids on the bench, but I’m told it was a quick pass from behind the net to the shooter planted in front of the net. There’s not much you can do about that other than hope you get in the way of the puck.

I can’t yet judge if the quality of Novice B had dropped all over the city as much as it has for NDG, but so far it seems to have.

Child Two asked me if there are any words that end with a “K” sound made by a K but not by the CK letter combo. I thought of “ink”, but then she stipulated that there has to be a vowel before the K.

The first word to come to my mind? Lek. 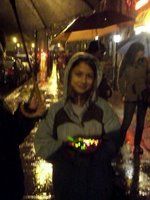 The whole family attended yesterday’s Geek Montreal Geek Out – eventually. We started without Child Three, then lost Child One to a party, but eventually all wound up together.

We started by playing the fastest game of Clue I’ve ever played, thanks to an early lucky guess, but the main feature was the showing of a documentary on the Graffiti Research Lab, which was followed by a mass effort by most of us to build LED throwies. A throwie is a slim battery (like a watch battery, LED, and flat magnet duct-taped into a small, throwable package. If you toss it at something ferromagnetic, it will stick. The battery will allow the LED to glow a month or so.

We didn’t have enough batteries to build more than a few large handfuls of throwies. Ours were dimmer than thos ein the video because our batteries were weaker. Inspired by the Graffiti Research Lab, most of us set out to find something ferromagnetic in the Crescent Street area.

By that time, the family was united. Child Three did not want to go throwing (throwie-ing?). He had asked me if what we were going to do was legal, and I wasn’t sure what to answer. I said it was a gray area. He asked if it was like graffiti. I said sort of, but there probably weren’t any laws specifically against using throwies.

Whether it was his sense of right and wrong or because he only had a cotton sweatshirt in which to brave the rain, Child Three opted out of the vandalism activity.

You’d be surprised how hard it is to find pieces of ferromagnetic building material in downtown Montreal. We found a lot of aluminum. Damn Quebec and our cheap hydroelectric power that can be used to smelt aluminum.

I finally found an appropriate target, in the alley between Crescent and Mountain. The backside of Thursday’s is a two-story sheet of corrugated steel.

Of course, the throwies go “plink” when they hit. It sounds like you’re throwing pebbles. There’s a walkway above the alley, and we were spotted by kitchen staff, whom we studiously ignored. My keen tactical mind appreciated that the moment was ripe to disengage and move on before enemy reinforcements showed up, so I headed further down the alley, far enough that I could escape around a corner if, say, cops showed up to arrest the rest of my family. Someone would have to retrieve Child Three and make bail for the females. Always thinking, I am.

Cops didn’t show up, but a security guard did. I wasn’t close enough to hear the conversation, but when I saw the guard launch his own throwie at the wall, I figured I could safely return.

Done behind Thursday’s, we walked around looking for more targets, but didn’t find much. We sprinkled a sign post on Crescent closer to Sherbrooke, but those weren’t high enough to discourage removal. If at night you go behind Thursday’s sometime over the next month, however, you should be able to see evidence of our vandalism street art. Or you can visit Elvi’s Picasa album.

I’ve taught my classes about the Dark Web/Deep Web/Invisible Web, which is the accumulation of Web info that standard search engines do not access and present as search results. Examples are drop-down menus, databases, and (until recently) PDFs. DeepDyve is a new search engine that claims to bring search-engine light to the Dark Web.

I haven’t tried DeepDyve yet. It requires registration, although it’s free. I’m not anti-registration, but I can’t be bothered to take those extra five minutes. I will soon, perhaps, but in the meantime, DeepDyve’s mere presence is worth acknowledging.