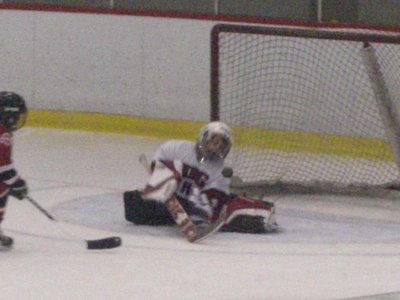 Our NDG Novice B team is playing in the tournament we host over the holidays. (We’re the Cougars in the results page I linked to.)

Having won our division in a tough game yesterday that pitted the two unbeaten teams against one another, we played a Boisbriand team today that had lost one game all year. That one loss, by the score of 4-3, was to our fellow NDG team, the Panthers, in this tournament last weekend.

Going into the third period, we were down 3-1. Boisbriand scored all their goals on rebounds or goalmouth scrambles. We had our rebounds, but often didn’t have players in place to cash in. They did, and our defence wasn’t used to playing against a team this solid in its hockey sense and capability.

The third period was fantastic hockey. Child Three’s pads flashed out left and right to stop good opportunities, and we scored a goal on a breakaway. We tied it with only a few minutes to go.

We played a five-minute overtime that settled nothing.

Both goalies played marvelous games, although they had a huge gulf in styles. The Boisbriand goalie was a big kid who always tried a butterfly style, the kind that slides backward and ends up with the goalie sprawled belly down on the ice. Child Three is more upright and mobile, relying on angles and speed to get in the way of the puck.

Still tied, off to a shootout we went. The head coach sent me to counsel Child Three. He skated toward me at the bench, and I could see that his eyes were as big as saucers. “I can really feel the adrenaline,” he said. I asked him if he felt shaky, and he told me he did. So did I.

As home team, we decided to shoot first.

Our first shooter, who’d scored our second goal, deked the goalie and had half a net to shoot at: 1-0.

Their first shooter came straight and let go a good glove-side shot. Child Three didn’t catch it, but did get his elbow in the way: 1-0.

Our second shooter also tried a deke, but was stopped with a beautiful butterfly slide across the crease: 1-0.

Their second shooter swung wide and came across the slot. Child Three, on the ice to make a save, lunged for it but there was little doubt: 1-1.

Our fourth shooter challenged the butterfly with a shot at the five hole, which squeaked in: 2-1.

Boisbriand’s fourth shooter came in and took another good shot about hip-high to the glove side. Child Three again leapt to get in the way and the puck disappeared. The referee skated over and signaled no goal. Child Three got up and the puck was underneath him. He’d made another head save, he explained later, although he didn’t know where the puck had gone to.

Victory was ours today. We play our fellow NDGers tomorrow in the championship game. If this keeps up, I’m not going to live to 50.

The miniature poodle of discomfort is staying with us for a week again, but she hasn’t peed inside the house (yet), as far as we know.

We prepared for our little guest by shifting furniture. We replaced our second malfunctioning TV with an ever bigger (used) one, and it came with a cabinet that fits it just right. The cabinet has its rear corners cut off at an angle so that the front is rectangular and the back half hexagonal (picture a home plate with the rear point sliced off parallel to the front edge).

The cabinet can fit in a corner, although I don’t think it’s meant to. Regardless, we put it in a corner, to the left of where our old TV was. We moved the piano to where the old TV cabinet was. We actually have a blank wall in our living room now. It looks much bigger. I wonder what Elvi did with all the photos that used to clutter the top of the old cabinet.

We did all this moving last Sunday, the day before we hosted a well-attended holiday gathering. By “we”, of course, I mean Elvi. It was easier to move all the stuff than it should have been, and a brave choice to do all that before the party.

Maybe I should have a photo to show you.

In about an hour, Elvi’s sister and her three kids will arrive from California to stay with us for a week. We will pick them up at the airport – again, “we” meaning Elvi. 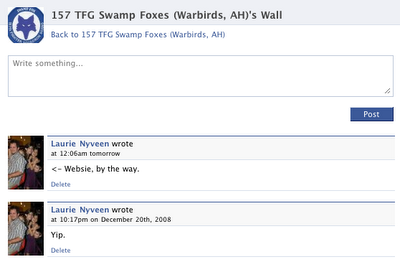 At first, it seems like you can figure out how that error occurs, but with a little more thought, it becomes devilishly perplexing.