The videos of Child Three’s all-star game are up.

This took a bit longer than I planned, as I experimented with video formats and sizes. I’m not 100% pleased with the result, but I’ll follow the “80% is good enough” principle on this one and call it done.

I had a little panic attack Monday when halfway through the editing process iMovie refused to accept clips from the camera. There was space on the drive I was using, but I transferred some large files off to make more room. That didn’t help, so I tried to move them back and got a Mac OS X error message, error -36. A panicky half hour of research later, I opened up Disk Utility and repaired some errors in the directory. That was the problem, and it was smooth sailing – and editing – from that point on.

First period (Child Three rides the bench for this one):

If you want higher resolution versions of this, ask me for a DVD. It looks much better. Why do I use Google Video instead of YouTube? Because YouTube restricts uploads to videos up to ten minutes long and the hockey periods run longer than that. 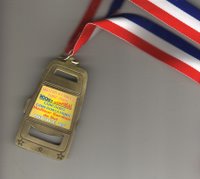 Hockey Montreal held this year’s Novice B all-star game at Rodrigue Gilbert Arena in Pointe aux Trembles. That’s so far east (northeast for non-Montrealers) that every highway exit has a sign for a bridge. It was more than a half-hour drive from our home in the west-central region of the city/island.

I woke at 8:00 a.m., showered and fed Child Three, and we loaded his goalie equipment in the car. We set out at 9:15, given the light snow and threat of more. We got to the arena by 10:00 a.m., the time we were told to show up. We were among the first to appear, but soon everyone else filtered in. The two NDG head coaches didn’t make it. Neither had a child in the game and the drive was long, although both were invited to coach in the game. Our head coach designated me his proxy.

I brought a video camera and filmed a bit in the dressing room. The first part of the morning was a skills competition. I was, of course, mostly interested in the goalies, one in particular, and I focused my filming on that – when I could focus. At one point the camera would no longer auto-focus or even manually focus, although it would still zoom in and out. The problem went away after I turned the camera off and back on, but I’d already spent some anxiety. I was able to to get some footage of the two NDG goalies chatting during a break – maybe discussing what they’ll name their little goalie children after they hook up.

I filmed the skills competition from the bench, but there were four coaches back there and I could get a better angle on the game from higher up, so I left the kids and raced up into the stands.

Last year, I was head coach at this all-star game, which is divided into the East division against the West (we only play inside our division during the season). We got shellacked, something like 8-3. This year the game was much more even. The change in player age classification from one that matches the school-year date of October to the end of the chronological year seems to have affected the eastern half of the city as much as it did us.

There are three goalies on each team and one plays each period. The other NDG goalie, started and had only three shots, although she had to make three great saves. Child Three grabbed the second period and wrung its neck. He played superbly as the East team came on more strongly. He was so impressive, other parents looked envious as they asked if he were my son.

If that kid put on a show in the second, he raised the roof in the third. Wow, did he play great. The crowd roared after some of his stops, particularly one in which he stretched and reached and deflected a sure goal headed into the top left corner. He didn’t let anything past him and the West team won 2-1.

The organizers handed out awards for the skills competition following the game. Child Three won for best goalie, and you can click that image for a close-up of his medal. (I don’t think his game performance entered into this decision, but it would have seemed odd to see any other goalie win that after his game.) Player of the game for the West was #40 on the Ahuntsic Bruins, who we saw in that game, and who turns out to be still six years old. I suspect that had Child Three not won the best goalie award, he would have won that award as well.

(I do feel badly for the other NDG goalie, who in a fair universe would have spent some time in goal in the third period, too.)

Most of my footage is still in the editing suite, but I did slap together a film of the skills competition. I’m not happy with the Google Video compression of the MPEG/MP4 (for some reason much worse than the conversion of the earlier QuickTime .mov files), so I will redo it once I get the game films online. In the meantime, here’s the initial version.

Once the all-star game ended, we came home, relaxed for an hour plus, and headed out to play a game at the NDG Novice/Atom tournament. We played a hard-fought game against the Boisbriand Laser B2 and won 1-0 as our boys played their hearts out and butts off. Not bad, eh? An all-star game, an award for best goalie, and a shutout all in the same day.

And today, in league play, we took a convincing 3-2 win over the team that completely outplayed us to a 2- tie last week. Last week, we had four shots; this week, the skate was on the other foot.

Someone from Seanjohn.com visited 101 after a Google search for “misunderstood artist” – for which thus humble blog ranks fourth in the known universe.

If I knew what I’m doing right with respect to Google Pagerank, I’d bottle and sell it and make a fortune.

I’m getting back to my current script, prompted in part by a new writer’s group I’ve joined.

It takes so much effort for me to sit and write these days. I’m not sure what the problem is. My schedule has gone all wonky, as well. I’m offset a good five hours from the rest of the world, which makes me feel odd, but does give me a nice chunk of time to use late at night – as long as I use it to write.

I added new code for the Last.fm radio widget in the sidebar. I’m not sure what happened to the old code to break it, but you can now listen to my preferred music until butterscotch pudding leaks out of your ears.