Child Two is off to California for the weekend. When I was a kid, a sleepover was a big deal.

She’s flying as an unaccompanied minor to join Elvi and Elvi’s sister in Mountain View. Child Two and I had some time to kill at the airport so we were thinking of ways she could make her journey more entertaining.

I told her to act mentally handicapped so that she gets free food. We also started joking around with what answers she could give when a flight attendant asks, “Hi, sweetie, what can I get for you?”

3) “I’m hungry and I only eat things that are orange.”

I am, once again, Superdad.

As for Child Three, here is the article that appeared in this week’s Suburban: 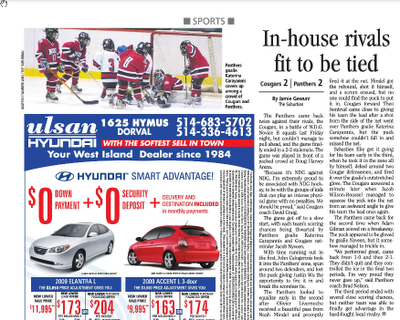 The team in red, the Panthers, has won every game but two they’ve played this year. Those two games were the tie tie against us in the game described in that article and the championship game in the NDG tournament, a game that our team won in a shootout.

It’ll be an interesting playoff season.

There’s a funny postscript to the story of my medication (see last post).

As I wrote, Elvi’s student insurance changed and part of that was the dropping of the drug plan. Quebec requires drug insurance and will provide it with a program called RAMQ if a resident is unable to secure private insurance. That happened to us, and RAMQ is retroactive.

My Cipralex had cost $70 and a dozen sleeping pills, prescribed should I need them, had cost $7. I filled and paid for the prescriptions the day before our RAMQ coverage began, but I knew I’d be able to go in later and make a retroactive claim.

I tried that Monday. Cipralex is not covered by RAMQ, which is a shame. I really can’t afford an extra $70 a month right now. The better story is the sleeping pills.

I was literally speechless for a moment, which gave her time to try to explain the above. That doesn’t make any sense. I was flabbergasted, and the nice lady was sheepish. She didn’t feel good about it, for sure.

We exchanged comments – mine perplexed, hers embarrassed – until she ended the stand-off. She slid the official forms she’d printed across the counter to me and whispered, “Let’s just forget you ever came here.” I told you she was a nice lady.

For the past year – or years, or possibly lifetime – I’ve been feeling bleh. I’ve had trouble falling asleep, I haven’t felt much joy or satisfaction, and the effort I require to start to work has been mountainous. I wouldn’t get as much done as I wanted – or, often – anything done – and I’d beat myself up over that.

I’ve never been the cheeriest person, and this didn’t feel so out of the ordinary. I’d have occasional down periods, but I’d never say I felt classically depressed and never felt even remotely inclined to self-harm.

This winter, I heard a radio campaign about depression and it felt like they were talking about me. I know I didn’t used to be this way – OK, not so much this way.

I called my GP; I was overdue for a check-up anyway. Through Elvi’s student status, we used to have good private health insurance that would pay for private clinical work and offered a drug plan. Things changed, though, and the latest student insurance plan doesn’t cover the $600 cost for blood work at my GP’s in-house clinic when I could go to a hospital and get it done for free with my provincial Medicare.

In January, I called my GP to book an appointment and got one that same month. When I mentioned that we didn’t have the private insurance anymore, couldn’t afford the $600, and would need a requisition form to get this done at a hospital, the receptionist said she had to move my appointment to August. She did say to make an appointment if I had an emergency, but I didn’t think my suspected chronic low-grade depression was an emergency.

The rest of my family uses a family health clinic in a local hospital, but they were not taking on new patients. They referred me to another clinic and I got an appointment for a couple weeks in the future.

I saw this new doctor February 4. I had been hoping for a referral to a psychiatrist, but he was willing to prescribe an anti-depressant right then, and to take me on as a new patient. In an odd coincidence, he was born in Rehovot, Israel, within sight of the airfield (Aqir/Ekron/Tel Nof) that was 101 Squadron’s first base.

So I’ve been on Cipralex for two weeks now. I suffered a few side effects immediately, not all of them bad. For example, the daily pills make me sleepy and I’ve taken them after supper, so I’ve been getting to bed at a more regular hour. They also seem to suppress my appetite; I enjoy my food as much as ever, but I just can’t eat as much as I used to. Not bad, eh?

The pills are supposed to take three to four weeks to kick in, but I’m feeling pretty good today. I did a lot of smiling. Maybe I’m just having a good day.

When I opened the front door to take the kids to school, there was a skunk about a foot in front of it. I closed the door quickly, but nothing happened. The kids wanted to see the skunk, and it was extraordinarily cute, so I gently opened the door and peered around it. The skunk was sniffing the concrete where some garbage had spilled Sunday night. It was completely calm and ignoring us and it didn’t smell in the least. The kids and I watched it decide there was no food here. It squaeked through the railing and waddled off on the snow. Score!

I took Child Three to a dermatologist for a red scaly rash on his hands. It turns out to be “winter hands”, excessively dry skin brought on by winter air and too much washing. All he needs is some lotion. Score!

I went to the hospital to get my blood test after dropping Child Three at school. It’s terribly hard to park on the street there and the lot costs $15. A spot opened up in front of me half a block from the entrance but the street sign said there was no parking Tuesdays 9:30 (the time at the time) and 10:30 so I drove on. It wasn’t until I’d circled a few blocks that I realized that the parking regulations only kick in between March 1 and December 1. I beelined as much as possible for that first spot and it was still empty. Score!

My blood work required 12 hours of fasting. I’d eaten my last food at 10:59 p.m., having forgotten my plan to get the blood work done in the morning. I was confident there’d be some wait, but I figured 11 hours would be sufficient. I had my iPod and a book to help me spend the time. At 11:00 a.m. exactly, I was called in to have my blood drawn. Score!

I also learned this morning that the Suburban has plans to publish an article on our Novice B team tomorrow. Score! I’ll try to get a copy, but the article may appear online.

I was miserable over the weekend, missing Elvi more than usual. It’s not her domestic contributions I miss. I’m capable, and I kick into high gear when she’s not around. I miss her friendship – and I’m jealous of the fun she seems to be having. But I feel good today, dwelling more on her return than her departure. Score!

I’m finally supposed to start working on my next airplane book, about B-17 bombers in the Israeli Air Force. Score! My producer loves the work I’ve done on that biopic. Score! Now, if only I could get to writing those instead of blogs.