This morning at 9:00, the NDG’s two Novice B teams faced off for the championship of the Hockey Montreal Western League.

The Panthers had beaten us 4-2 earlier in the playoffs, but we climbed into the final game with a solid 3-0 victory over the Ahuntsic Chiefs.

The Panthers had only lost one game this year – in a shootout, to us. We’d also tied them during the regular season.

This morning, our boys played their best game of the season. We dominated the game, territorially, in shots, in saves. We played better positional hockey, which got us up 1-0 on an end-to-end rush and 2-0 on a nice shot to the corner of the net. Down 2-0, the Panthers stopped playing as a team and started to press. That allowed our boys to control enough of the game and add a big goal to make the final score 3-0.

Elvi had our new video camera, but got a little confused so early in the morning about what red and green lights mean with respect to recording. We have two periods’ worth of video of the breaks after whistles and before faceoffs. She did get the third period on tape, and there were other camcorderers at the game, so with any luck I will be able to slap together a DVD of the entire game.

Tomorrow morning we play the Eastern League champions for the city crown.

In my reporting of my children’s activities, I have a bias for Child Three because I participate with him in his sports. Here’s some news of the girls.

The Math League is an international organization that distributes math contest to schools and grades the responses. The elementary school that Children Two and Three attend usually does well in the Canadian National Math League results – but this year, the school is tops in the entire country and it’s not even close.

Helping her school to victory, Child Two scored so well (37/40) that she tied for tenth in the nation. One of her best friends tied for first (39/40). You can see the scores and school rankings here.

Child One meanwhile, makes friends in odd places. While waiting for a lift home from a movie, she plopped her self down on Ste. Catherine to read her book. Apparently, the combination of her personal style and slight figure can prompt some concern. A well-meaning adult approached her and asked if she needed any food or other help. Child One said that she was fine, and the adult took her at her word, but left her with a small medallion of Mary. The slogan reads “O Mary conceived without sin pray for us who have recourse to thee.” It’s a Catholic thing. As the punchline to my favourite vampire joke goes, “Dos vet nisht helfen.”

Child One also makes friends on the bus. According to her, a college-aged guy took out a pen, scribbled on a business card, and handed it to her before getting off the bus. The college-aged guy’s name is Kevin, he wrote to Child One “You look nice”, and he included his phone number and e-mail address. I guess he has a thing for 14-year-olds in school uniforms. Oy.

Our team of Novice B boys finally played like they can and won 3-0 to advance to the league finals, which will be an all-NDG affair. I wonder where our team has hidden for the last month.

Child Three got the shutout, but seemed a little awkward on a few long slow shots early in the game. He came out to play one as an opposing player closed in. Standard goalie procedure in that case is to freeze the puck or at least send it into a corner where a defenceman can pick it up, but Child Three decided to stick-handle around the opponent, giving the entire bench the heebie-jeebies.

When he came to the bench after the period, he expressed how cool it had been to stick-handle the puck by the other kid…. 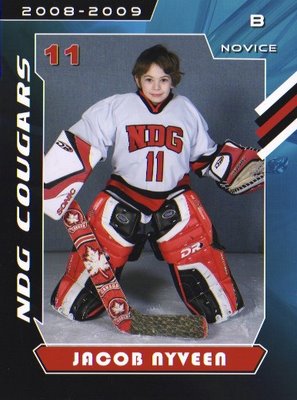