Yesterday, we discovered April, our youngest chinchilla, dead of unknown causes. Her left thigh was plucked bare of fur but had no wounds. The only sign of distress on her was fur matted with what looked like snot or chinchilla vomit below her nose and mouth.

I think the fur may have been pulled out by April’s cage-mate and mother, January, in some sort of attempt to get her attention.

We buried her in the pet graveyard under our crabapple.

In case you’re wondering, bare chinchilla skin looks surprisingly human but feels thicker and supple, like a cheek with pores. The skin is whiter than than mine, just about Bjorkish in hue.

Saturday morning saw Houston and much of the US threatened by thunderstorms, as was our flight home. We had a departure scheduled at 12:50 p.m. for a 4:20 p.m. arrival in Cleveland and a flight home to Montreal an hour and a half later.

I checked flight statuses up until we climbed into the car for the trip to the airport. Our intended aircraft was delayed in Phoenix for 37 minutes, Continental’s Web site told me, but should leave Houston on time.

After our hour-long drive through rain, we arrived at our terminal, where the fancy board on the wall told us our flight was delayed two hours. Good thing I’d checked the Web site.

Of course, we were going to miss our connection in Cleveland. Laura, the besieged check-in attendant who dealt with me, at first told us we’d only be able to fly home Tuesday, possibly Monday. I politely (I swear) informed her that was not acceptable. She looked and looked for alternatives and came up with two. We could fly to New York and stay overnight Saturday, then fly out Sunday. We could also fly Sunday morning directly to Toronto and on to Montreal at 6:00 p.m.

She pled our case to a Star Chamber on the other end of the phone, but told us the bad news that Continental would not spring for a hotel room in New York. That left us with Toronto, which meant that I’d have to schlep two kids and three pieces of checked luggage through Canadian customs and on to Air Canada for a second check-in. Still, I had little choice. Luckily, upon reserving our seats for the next day, the 4:00 flight from Toronto to Montreal popped up, so we grabbed that instead. 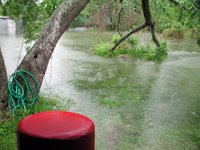 By the time we were organized for Sunday, the airport’s underpasses had flooded. We spent a while trying to get out of the airport without risk of drowning the car. We found a flattish road that would take us out but even on that we had to cross three bodies of foot-deep-plus water flowing so quickly they had whitecaps. My friend Ron Jackson took this photo of his backyard that Saturday afternoon. While the winds weren’t as strong, Houstonians have told me the volume of water was of hurricane proportions.

We got to spend an extra evening in Houston, the first part of which we spent at a backyard barbecue birthday party for my mom’s neighbour. He was turning 43 – my age. About a dozen couples attended, but even the folks around my age seemed so… – well, old to me. I felt completely out of place. I don’t among other friends in my cohort, it was just these people. the wife of the birthday man was a bubbly, giggly 28-year-old, who certainly helped highlight the difference.

I spent an hour at the party, had some great food, then retreated to my mom’s house to make other plans.

Our flight home was as good as can be expected. Air Canada had system trouble with our bags and baggage tags, but the agent eventually resolved the problem by deleting all records of our bags (which took a while to learn how to do) and issuing new tags.

We got home warm and dry.

We went out to a lovely Mexican restaurant called Tampico, a Mexican seafood place we visit every trip.

The snapper, shrimp, and crab legs were excellent as always, but the entertainment put a few exclamation points on our night out.

My brother sat next to me, his wife across from him. Their rambunctious, loud, but cute 18-month-old only child flitted through several seats over the course of the meal.

The kid is a handful at restaurants, if my three experiences with him are a valid sample. He doesn’t appreciate the value of quiet conversation or a place to relax, and why should he at 18 months old?

Let me set the scene for the highlight. My brother’s wife is talking to my mother, who sits to my right. On my left, my brother holds his kid on his lap, facing the table, and bends over as he tries to feed him.

Unfortunately, no one noticed the danger, not even your superdad author. My brother had unwrapped the cutlery from the napkin to get the fork he was using to feed his kid. As the kid squirmed, his hand found the pointy steak knife within reach. He grasped it and, as kids do, he threw his hands up in the air.

His little fist flew up and connected with my brother’s nose, then stabbed him in the face with the knife. My brother reached up and grabbed his nose and eyes, shouting, “Take the baby! Take the baby!”

The baby was took, and we surveyed the damage. My brother had a bloody nose from the blow and luckily the tip of the knife had missed his eye by millimeters.

Whether his father or laptop keyboards, the kid has only succeeded to temporarily incapacitate his victims. He’s got a way to go.