The traditional Haggadah with the red and yellow cover is chock full of rabbinical and Talmudic commentary that’s so boring and, frankly, pointless. Several years ago, Elvi took it upon herself to edit a Haggadah for our family, and it’s a great hit. It covers all the salient points of the holiday, keeps all prayers and parts of the seder, adds songs, but disperses with the tedious debates.

It’s a big hit, and is spreading. Maybe we should publish it….

All that is preamble, really, to Passover 2.0, “Moses is Departing Egypt: A Facebook Haggadah“. It’s a hoot.

Our own departure was ridden with minor plagues, but I weathered them well. We got in the Continental line at Trudeau/Dorval airport and an airline rep for Northwest asked us if we were on the 6:00 a.m. flight to Detroit. I knew we were on a 6:00 flight, but I didn’t know our intermediate destination. He asked us to follow him to the Northwest line. I thought it was odd, since I knew we were flying Continental, but it was 5:00 a.m. and I hadn’t slept at all that night. So we followed him.

Of course, the Northwest system couldn’t find our flight, and neither could the extremely fetching counter lady at the Northwest desk. The original Northwest guy figured out that I’m an idiot and redirected us to the Continental desk, but told us to use the first-class line to avoid the queue.

At the Continental desk, the same fetching lady took care of us, She explained she works for both airlines. It was, however, her first week, possibly day, on the job and it took a while and the help of two other agents to get us checked in. I didn’t mind.

US Customs provided the next delay. A couple two spots ahead of us in the line for our official proved a little too suspicious and the agent (officer?) took a while interviewing them before personally guiding them to the interrogation and strip-search chamber. When it was our turn, he sent us right through without asking to see the pointless permission slip I need to carry to “prove” Elvi allows me to take the kids across the border.

We switched planes in Cleveland, as it turned out, and only had to wait about 37 seconds to board our next flight. The timing was unusually perfect, but we had one more delay to wait out. About 15 minutes out of Houston, a passenger on our plane fell ill two rows ahead of us. There was a doctor on board, and a nurse, and fortunately the emergency wasn’t too serious. From what I overheard, I suspect the patient was a diabetic with low blood sugar. Upon docking at the gate in Houston, we had to wait for the paramedics to remove the patient before we could debark.

More on this vacation later, perhaps. There’s not much to write about – and that’s a good thing.

Yesterday was the annual six-hour crankfest known as the Irrational League draft. This year’s was a standard draft and I think I did well. My batters are all starters except for the catchers, both of whom are backups, but with a bit of oomph in their swings. I have no Jack Wilsons this year, but Cristian Guzman comes close. Guzman was the only batter pick that made me cringe.

I left Jamie Moyer on the table slightly too long and he was drafted a few spots before I would have grabbed him to complete my pitching staff. Instead I had to go with either Mike Hampton (ugh), Zach Duke (double ugh), or Joel Pineiro (more double ugh). I went with Hampton under the assumption that he has the most chance of being good, even though I think they will all disappoint.

My keepers were Carlos Beltran, Lance Berkman, Matt Kemp, and Ryan Ludwick. I wasn’t happy keeping Ludwick, but he was the best option. Now, my team, with my projections….

I think the team will reach a .280 average and 255 HRs – probably good for second or third place. I expect to finish near first in RBIs with about 1035. Steals should top 140, which will also rank fairly high, say third or fourth. Figure 33 points in hitting. I have three shortstops for trade bait, although I did last year, too, and no one wanted them.

My pitching is both better and worse than last year. It’s better in that I have three bona fide closers whereas last year I had one, plus a wannabe. My closer choked and lost his job (Manny Corpas) and my wanna be came through. I had better starting pitching last year. This year’s starters are all injury risks, but should be good enough to help we win the rate categories. Wins will donate the fewest points to my score.

My reserves are OF Matt Holliday (yes!), 1B/2B Jeff Baker, SP/RP Cha Seung Baek, and RP Will Ohman. Impending free agent Holliday is a gamble on next year (I think the A’s will be in the race long enough to keep him the whole year), and the others are all useful plug-ins. Between Schumaker and Baker, the only position at which I’m without a back-up is 3B, and I expect big things from Zimmerman.

I’m more confident this year than I was last year.

Fame inexorably rolls on for my kids. This week’s Suburban has an article on the Novice B Coupe Montreal game. 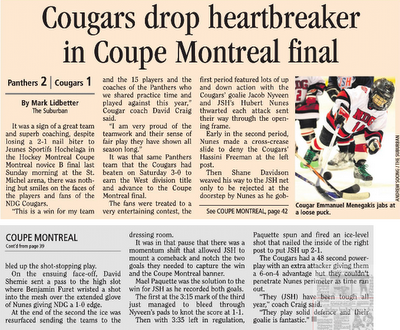 The score subhead is wrong. It was JSH 2, Cougars 1. At least this article got some of the names right.