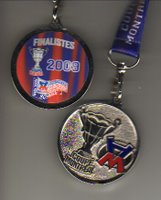 We played JSH, the champions of Hockey Montreal’s Novice B East League on Sunday. We had played them in a tournament in January, losing in a shootout.

The first period ended 0-0, but they probably had the edge in play. The second period was all ours and we took a 1-0 lead. The period ended as we had a two-man breakaway crossing their blue line.

Normally, our games progress without interruption but for the playoffs, the zamboni cleans the ice after the second. We had time to sit in the dressing room and plot strategy for the third. Unfortunately, our opponents could also take advantage of that opportunity. They came out stronger. Our boys started back on their heels and never recovered. We lost 2-1. Child Three played superbly – but so did the other goalie.

I think the big victory to win the Western League took a little wind out of our sails, but no matter. We all had smiles at the end of a great season.

We had another nervy moment last night. I use a little FM device that lets me listen to my iPod on my car’s FM radio. By “my iPod”, I mean Child One’s specially engraved gift iPod. I never leave it in the car but stick it in a pocket and take it with me.

Last night, I went shopping with the two younger kids, and the iPod. on the way back to the car, I too out my keys and discovered the iPod was missing from my jacket. We retraced our steps all over the giant Loblaw’s but didn’t find it. The smile on the kid at customer service revealed that he felt the same way I did about the possibility that someone would turn in an iPod they found in the store. Regardless, I left him my card and he promised to staple it to a note. He cautioned me that there was little hope, and I agreed – but some hope is better than none.

Back at my car, the guy parked next to me was pulling out of his spot. His withdrawal revealed more and more asphalt and there it was! The iPod had fallen out of my pocket right next to my car and hadn’t been run over by the guy who was pulling out.

Lesson learned: don’t put the iPod in a waist pocket of a jacket. Pants or breast pockets only.

Netsurfer Digest used to track all the great online April Fool hoaxes. While I’m less diligent about that, I am impressed with two of Google’s efforts. Check out Gmail Autopilot and the panda-loving CADIE.