Back in the ’90s, I created a virtual version of 101 Squadron in Warbirds. One of my recruits, Flyboy, was a 12-year-old Israeli boy who under my tutelage went from turn-and-burner to a master tactician who more often than not bested me in a fair fight (but why fight fair?).

The squadron died out as WarBirds players left for other games and I haven’t kept in touch with most of my squaddies. I knew Flyboy wanted to try for flight school when it came time for his military service.

I recently received this e-mail from him (quoted with permission, and cleaned up a bit):

It’s been a few years since i last heard from you. A few days ago, I had a chat with Viff and your name came up, so I decided to pop up and say hi.

A lot has happened since we last talked. After I left Warbirds, I played Aces High for a few years. Several Israelis played it and the 101 lived and became a powerful force but, same as WarBirds, people started leaving Aces High and eventually I found myself alone.

That was around five years ago, and several months later I got drafted and started the IAF flight course. I did quite well and was selected to attend fighter-pilot school. After a year and a half, the air force kicked me out of the course but left a window open if I ever wanted to come back.

I decided to leave the air force and went to infantry. I joined one of the elite reconnaissance regiments and in May 2007 finished my training and became operational. After about half a year, I went to the officer academy and I’ve served as an officer in my unit for more than a year.

I havent given up on my flight obsession. I started doing paragliding and kept my account open in Aces High. A few months ago, I contacted the IAF and told them I want to come back and finish what I started. This week I got an answer: they said OK! If all goes as planned, I’ll be back there in January.

There are a lot of great guys I’ve met in the virtual skies I regret I haven’t kept contact with. I guess the intensity of the army and lack of free time contributed to it. I must say I think that you have some responsibility for my choices. I still remember my first days in the virtual world when you taught me the basics of everything. I was 12 years old then (I turned 23 on Nov. 5) and that experience still lives in me. I remember sitting in the tower and listening – well, reading the text – and not understanding how a plane can both climb and accelerate at the same time. I remember learning flying in wing formation for the first time, working as a group and as a squad.

I must say I feel like I’m closing a circle here, and in a way this is my way of saying thank you. I hope my message finds you well and in a good shape.

Waiting to hear back from you,
Flyboy
101 “Red” Squadron, Israel

Great to hear from you. Thanks so much for the warm letter.

It’s strange to think that you’re now, like, a man. It seems not that long ago that we were dueling at O’s house. I remember you kept beating me by blowing your Spitfire flaps at the top of a loop – I was pissed off at you. LOL

I still fly WarBirds once in a while but like you wrote, life gets in the way.

I’m glad things are working out for you and I’m jealous that you’ll be getting to fly a real airplane. I get to fly my dad’s Cessna 182 once every two years or so but he doesn’t like when I pull G on the turns.

Do you have to start over from the beginning or do you pick up near where you left?

I keep in touch with Viff every once in a while – we’re Facebook friends.

Keep in touch. I’d love to hear what happens.

The reply, with photos:

I’m restarting the third phase of the course, which takes place just after the first year of three. It’s where all the basic flying is done: aerobatic; low-level navigation (300 ft); instrument flying; night flying; soloing; formation flying; and basic air combat. I’m really looking forward to getting inside a plane again. although I barely remember anything. 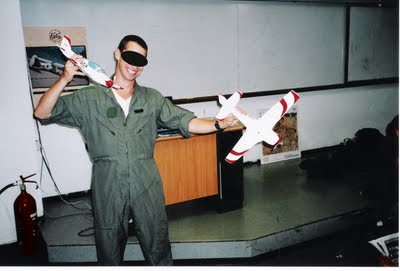 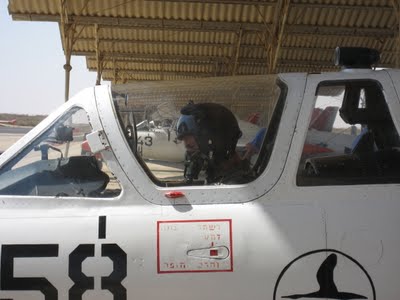 I own two domains, 101squadron.com and the as yet unused shitcafe.com.

I passively renewed the latter with Go Daddy’s automatic renewal and I thought that was that, but yesterday, a customer service rep from Go Daddy called me to confirm that everything had gone according to plan. At least, I think that’s why she was supposed to call but as the call developed, I became less sure of that.

Go Daddy charges $10 or so per year of registration, so calls to all customers for each renewal would cut into profits. The woman who called me asked if I had Web sites set up, so maybe it was a sales call for Go Daddy hosting.

She was, however, laughing at Shitcafe. She thought it was hilarious. She just about begged me to do something with it, at the very least to create an e-mail address. I told her the story of how it came about and she laughed even harder. Maybe she called because she saw it and thought it was so funny.

I still don’t know what to do with that domain name. Any ideas?

My cough’s still here. So is the mono, at least the fatigue.

I went to the depressing Cavendish Mall to see if I needed to pre-register the kids for a time slot, but the nice volunteers told me that they don’t do that, at least not at the Mall.

As you may know by the first line of this post, I still have symptoms of mono and a cough that’s about a month old. I call that bronchitis although that’s a self-diagnosis – my GP moved offices without informing me, thus cancelling my October appointment at which I had hoped to discuss my overall state of being. I have an appointment scheduled for next Tuesday, so don’t nag me.

Where was I? Oh, yes. I was at the Mall and as there was no line I asked if bronchitis was one of the conditions that would put me in a priority category for a flu shot. The volunteer told me it was (I knew that before I asked).

So I passed the first checkpoint in the eight-step flu-shot process. Step two was watching an informative film about the flu shot’s advantages and side-effects. I skipped that and went to step three: registration. The prim middle-aged mustachioed man there triaged me slightly by asking what I was sick with. I said bronchitis and he asked, “Is that all?” as only a prim middle-aged mustachioed man can. He explained that that was his way of getting people to reveal their deepest health secrets. Uh huh.

Step four is ticking off the answers to six yes/no questions on your form. Step five is waiting for a nurse’s consultation.

My nurse asked me what medication I was taking for the bronchitis and I said I was taking none. She disdainfully got up to ask another nurse for advice, and together they decided that because I wasn’t taking medication, I was not a priority patient.

They barred me from step seven – the shot – and I had no need for step eight, which is a 15-minute wait to make sure you don’t die from an allergy. They show “Bambi” on a widescreen TV to help pass the time.

Tonight, I took the three kids to get vaccinated. We sailed through steps one to five, and I tried again to get my own shot at step six, the nurse.

This nurse was more reasonable and, again in consultation with another nurse, agreed to let me have the shot. This time, though, I also mentioned that I had had mono. The mono ruled me out because the mono is still active in my system. That’s a shame, but the nurses and I did have a pleasant conversation about my illness and my time spent in solitary confinement and subsequent diagnosis.

While we were chatting with the nurses, we saw a chubby 11-year-old boy screaming his head off. He was afraid of getting a shot and the fact that his dad was carrying/dragging him toward the vaccination chamber, comfortingly ringed in black curtains and chains, couldn’t have helped soothe him. My kids took that in stride, at least externally.

By the time we reached the black curtain of doom, that screaming kid was snuffling and on his way out.

Child Three volunteered to go first. At the moment he sat down, the nurse across the table injected her patient, a man in his 20s with Down’s syndrome. He shrieked so suddenly that it made me jump. The piercing yelp melted into a moan, then a whimper. Still, my kids seemed non-plussed.

All three took their shots with less difficulty than chewable cold tablets. We spent 45 minutes at the Mall, and that counts step eight, 15 minutes of “Bambi”.

I’ll see what my doctor says before I make another attempt to get the shot.

We’ve played some good hockey, improving each game. We’re at 3-1-2, having tied the first-place Ahuntsic team thanks to some spectacular goaltending. After that game, the opposing coach sought out Child Three to express his admiration. I hope he gets to go to another all-star game because he is the best goalie in the league, but our team has to be in the top three by mid-December to assure that.

Anyone want to film a big game for us on Saturday afternoon? I have the equipment….