My cough’s still here. So is the mono, at least the fatigue.

I went to the depressing Cavendish Mall to see if I needed to pre-register the kids for a time slot, but the nice volunteers told me that they don’t do that, at least not at the Mall.

As you may know by the first line of this post, I still have symptoms of mono and a cough that’s about a month old. I call that bronchitis although that’s a self-diagnosis – my GP moved offices without informing me, thus cancelling my October appointment at which I had hoped to discuss my overall state of being. I have an appointment scheduled for next Tuesday, so don’t nag me.

Where was I? Oh, yes. I was at the Mall and as there was no line I asked if bronchitis was one of the conditions that would put me in a priority category for a flu shot. The volunteer told me it was (I knew that before I asked).

So I passed the first checkpoint in the eight-step flu-shot process. Step two was watching an informative film about the flu shot’s advantages and side-effects. I skipped that and went to step three: registration. The prim middle-aged mustachioed man there triaged me slightly by asking what I was sick with. I said bronchitis and he asked, “Is that all?” as only a prim middle-aged mustachioed man can. He explained that that was his way of getting people to reveal their deepest health secrets. Uh huh.

Step four is ticking off the answers to six yes/no questions on your form. Step five is waiting for a nurse’s consultation.

My nurse asked me what medication I was taking for the bronchitis and I said I was taking none. She disdainfully got up to ask another nurse for advice, and together they decided that because I wasn’t taking medication, I was not a priority patient.

They barred me from step seven – the shot – and I had no need for step eight, which is a 15-minute wait to make sure you don’t die from an allergy. They show “Bambi” on a widescreen TV to help pass the time.

Tonight, I took the three kids to get vaccinated. We sailed through steps one to five, and I tried again to get my own shot at step six, the nurse.

This nurse was more reasonable and, again in consultation with another nurse, agreed to let me have the shot. This time, though, I also mentioned that I had had mono. The mono ruled me out because the mono is still active in my system. That’s a shame, but the nurses and I did have a pleasant conversation about my illness and my time spent in solitary confinement and subsequent diagnosis.

While we were chatting with the nurses, we saw a chubby 11-year-old boy screaming his head off. He was afraid of getting a shot and the fact that his dad was carrying/dragging him toward the vaccination chamber, comfortingly ringed in black curtains and chains, couldn’t have helped soothe him. My kids took that in stride, at least externally.

By the time we reached the black curtain of doom, that screaming kid was snuffling and on his way out.

Child Three volunteered to go first. At the moment he sat down, the nurse across the table injected her patient, a man in his 20s with Down’s syndrome. He shrieked so suddenly that it made me jump. The piercing yelp melted into a moan, then a whimper. Still, my kids seemed non-plussed.

All three took their shots with less difficulty than chewable cold tablets. We spent 45 minutes at the Mall, and that counts step eight, 15 minutes of “Bambi”.

I’ll see what my doctor says before I make another attempt to get the shot.

We’ve played some good hockey, improving each game. We’re at 3-1-2, having tied the first-place Ahuntsic team thanks to some spectacular goaltending. After that game, the opposing coach sought out Child Three to express his admiration. I hope he gets to go to another all-star game because he is the best goalie in the league, but our team has to be in the top three by mid-December to assure that.

Anyone want to film a big game for us on Saturday afternoon? I have the equipment….

First, a photo of my Atom B team. We’re 1-1-1 and tied for second early in the year. We tied the first-place team in our last game. 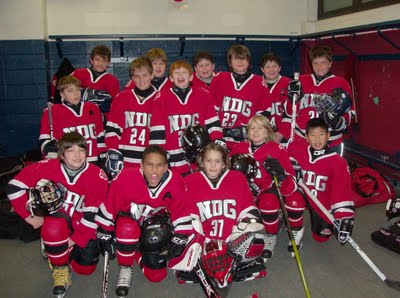 Next, here’s a trailer on a new documentary on 101 Squadron.

I’ll go back to coughing now.

September was slow. I had little work, lots of sleep at unnatural times, and little motivation to write.

I’m not sure if it’s coincidence or cause, but at the same time jobs are falling out of the sky. I nearly pulled an all-nighter Tuesday night to get my work done.

It started with computer-consulting work for a new client, converting his (very) small office from Windows XP to Macs. That’s technically not work I’ve ever done before, but I carried it out smoothly, only losing iTunes playlists and the attachments from the curs-ed Outlook to Mail.

That’s a huge pain, that Outlook. In order to overcome Microsoft’s proprietary e-mail-storage format, you have to first use Thunderbird in Windows to import te Outlook mailboxes, then export, transfer those exported files to the Mac, and import in Mail. Wheee.

My client loved his Mac so much after one day with it that he bought another for his wife.

A second job I caught involves research for a publisher. This publisher, as publisher s are wont to do, published a self-help book along with a marketing brochure. The book is fine, but the consumer affairs division of a first-world country is suing the publisher because whoever write the brochure was careless with paraphrasing and accuracy. That’s fun work, trying to rationalize with research the claims of the brochure.

There’s more potential work on the horizon – Web copywriting for a tech product. We’ll see if that pans out.

The best of all news is that I hung on to win my second consecutive Irrational League title. It was close, and with the benched pitching staff I had, I wasn’t going to hang on much longer. I won by half a point with a total of 57.5.

My preseason estimates can be seen here. I topped my expected batting average but fell short by 75 home runs. On a team with Beltran, Ludwick, Berkman, and Zimmerman/Wright, Matt Kemp led the team in home runs with 26. That says it all.

My starters’ health did not hold up, yet I finished first in wins, which surprises me. I did trade a closer (Chad Qualls) for a starter (Javy Vazquez, who nabbed 12 wins for me) early on, which is part of that. Chris Coghlan was a nice mid-season pick-up and the Matt Holiday gamble paid off handsomely.

So that’s me at this time. Happy Thanksgiving.