This was weird. Today, we had to submit our list of four keepers for the 2010 version of the Irrational League.

I kept reaching the same conclusion: I have to drop two guys that have been mainstays of my team for years. Aging sucks. You hurt, you get slower, and you can’t quite reach places you used to. I feel that myself, too.

Goodbye, Lance (Berkman). So long, Carlos (Beltran). Please empty your desks and have security escort you to the front door.

The strange thing is that this completes an absolute turnover in my keepers. A year ago, only Kemp was on my team, and that was only his second year with me. I acquired the other three through last year’s draft and a trade (Ryan Zimmerman for Wright).

As part of this series of updates, this one looks at our home menagerie.

We have a sick chinchilla. January had become lethargic and scruffy. The vet told us she had a molar tooth spur that had caused an infection. Two weeks later, after medicines, IV fluids, and a heating pad in her private hospital room (our downstairs bathroom), she is well on the way to recovery.

Various family members have absentmindedly left the bathroom door open at times, but January is the easiest chinchilla to catch even when fully healthy.

Crash is also out of sorts. He’s not ill but Horner’s syndrome has affected his left eye. He looks a little odd but is not in any pain. (Horner’s affects humans, too.)

I noticed that he looked like he’d been hit in the eye with a hammer and took him to the vet. After examining Crash to rule out infection, the vet told me it was either nothing or cancer. She said it almost always goes away by itself after six to eight weeks, but offered me the option of paying for a MRI if I really wanted to. I didn’t. If it’s going to go away, great. If it’s cancer… – well, Crash is already almost 12.

Child Three decided the time was right to find new pets of his own. He’s recovered from the New Year’s Eve grief of losing Momo the guinea pig and we accompanied him to the SPCA to look for more. 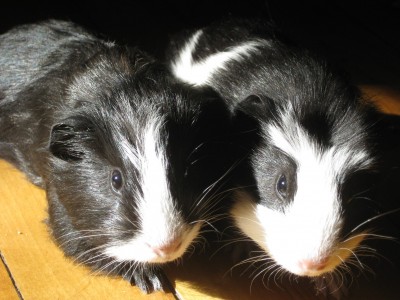 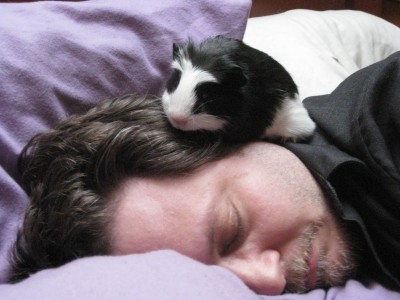 I have some brief observations on some entertainment so I might as well get them out of the way.

“Avatar”: Roger Ebert has codified his Ebert’s Law, which is that a movie is not about what it is about. It is about how it is about it.

What was “Avatar” about? It was a soft-core-porn mash-up of “Pocahontas” and “Return of the Jedi”. But how was it about it? Oh, it was brilliant. I saw the 3-D IMAX version and sat enthralled for every minute. The best movies take me to a new world, although not necessarily as literally as “Avatar” did. Wow.

“Glee”: At the request of Child Two, she, Elvi, and I have now watched the first season (a mere 13 episodes) of “Glee”. Thank goodness for Jane Lynch, who makes the show bearable between musical numbers. When the show takes itself seriously as a drama, it is simply not very good. Ridden with plot holes and characters who act as if simply to move the plot forward, the shows had us rolling our eyes at the predictability and foolishness. Why, for example, if Kurt’s dad knew and accepted Kurt’s homosexuality did he confront the boy in the basement about which dancer was his girlfriend?

Yet when the show embraces the absurd, and that’s brought primarily by Sue and Emma, it can shine.

“Glee” returns soon, and I hope it trends toward fantasy like “Pushing Daisies” did.

“The Pacific”: I’ve only seen one episode and it’s less… epic than the same team’s “Band of Brothers”. So far.