I saw my GP last week and in addition to discussing and dealing with my fatigue, I also had some joint complaints.

For about two years, my right knee has been locking up once in a while. It only happens once a month or so, but has become more frequent, and the knee is stiffer. I can feel something medial to my kneecap (i.e. on the thigh side) grind when I bend the knee. That spot is sore once in a while.

My other complaint is my temporomandibular joints (TMJ). Once in a while, they suddenly get so sore that I can barely chew, even something as soft as a sandwich. The TMJs occasionally pop, like a knuckle crack, but that’s been going on for as long as I can remember.

Consensus is that my knee has a cartilage tear or possibly a loose body. My jaw – who knows. The doc sent my for X-rays, which you can see below.

The knee images are fantastic. You can make out the muscles in my thigh. The TMJ images are less clear, but should let you play doctor on the Internet anyway.

Note that the X-ray of my right jaw is flipped so that it matches the left side in orientation.

I bought a cell phone for the first time more than a month ago. I’ve never had one – I still don’t, since this one was for Elvi.

Our California arrangement expired and we finally needed to shop for a local plan. Canada has just about the most expensive mobile phone service in the world and we weren’t happy with our options. We spotted an ad for Public Mobile, an upcoming service that offers unlimited talk and texting for a flat $40 total (no service fees) and no contract required. 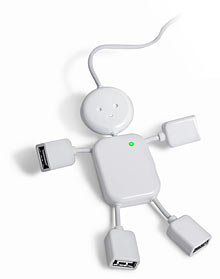 You might expect something like that in your part of the world but here in Canada, that’s an extraordinary deal.

Because we signed up early, the company also offered us lifetime unlimited long distance in Canada and the US for an extra $5 a month (that offer is still in effect – tell ’em I sent ya). The only downside to Public Mobile is that you have to buy a phone and, unlike the money-sucking mobile service companies, it doesn’t provide phones for free. I bought the most basic phone for $70.

We were all set for the roll-out of the service on May 15 but for undisclosed reasons, Public Mobile has pushed back the Montreal launch until June 26. To placate customers, the company is offering two free weeks of mobile service plus a $75 gift certificate for hardware. Not bad, but we’d rather have the phone working now.

In other tech purchase, we found these USB man four-port hubs on sale (see at left) for $3 apiece so we bought two, and shipping was reasonable.

Allow me to introduce Roadrageous. Yes, it’s what you think it is. I just couldn’t hold back any longer.

I was up late. It was one of those nights you check Facebook before going to sleep, find a nifty link, and keep surfing for hours. One page I visited presented fights between animals and men. The picture comes from there.

At some point during the night, Elvi asked why I punched her in the throat. I told her I was having a dream in which I was fighting a bear and I punched it in the throat. I don’t think I made clear the manner of the combat. See the image….

I took Crash to the vet today. His Horner’s syndrome has nearly cleared up, which rules out a tumour as the cause. Other than that, and a benign basal-cell skin tumour on his head, he’s healthier than a 12-year-old dog has any right to be.

While I was paying for that news, a young couple hopped out of a cab outside the picture windows and rushed in. The man had a cardinal in his hands. It was chirping and not well. For one, the man had picked it up off the grass in a park. For another, it was dripping clear mucus from its beak.

The vet is really only a dog and cat place, but the staff were as concerned about the bird as there were incapable of caring for it. I volunteered to take the thing to the small animal vet a few blocks away.

Cynic that I am, I figured there was nothing to be done. When I was a boy, I found a struggling pigeon. I called a vet to ask what to do and was told that the pigeon had probably been poisoned by the city. I don’t think anyone poisons cardinals, but this one was struggling.

I got 50 feet along the sidewalk before it spasmed in the small cardboard box and died.

Child Two won a Principal’s Academic Excellence Award at a ceremony at her high school yesterday. Way to go!

And Child One worked as assistant costumer on a short film Sunday and Monday. She detested my waking her for the 5:00 a.m. call time, but by all accounts she did well. The head costumer said she’d hire Child One for paying jobs in the future.