Every once in a while, one of my former students will update me on his or life after journalism school.

I received one this week from a student who passed through our department’s graduate diploma program.

With permission, here it is.

Hey, how you been? I’m working here in sweltering Toronto. I have a job for now… at this contest show. I’m also doing a bit of producing work for radio which means I can die a happy lady.

Part of this my work for the contest show is using a crapload of Excel. Your tip sheets for this program are so useful.

On the contest show, we totally use basic HTML in the blogging software we use. Because it’s such a shitty, not user-friendly program, we often have to go in and look at the HTML to figure out what’s wrong.

Letters like that make the struggle to engage my students in what at the time can seem tedious, pointless work worth getting through.

I spent four hours in the Bahamas yesterday. I arrived from Montreal, bought something to make for supper, booked a ticket for West Palm Beach, and left without my supper.

I took with a bag of spekulaas cookies, my only food of the day.

Why? That’s still a tale in the making.

I wrote an article on baseball uniforms yesterday and to do that, I studied the official uniform rules of Major League Baseball, Little League, and another youth baseball organization called USSSA Baseball.

Little League bases its rules on the rules of Major League Baseball. As a result, both groups require in their Rules 1.11 that “all players on a team shall wear uniforms identical in color, trim and style, and all players uniforms shall include minimal six-inch numbers on their backs.” Little League omits the number size and requires an official Little League patch on the left arm or, in sleeveless uniforms, on the left breast.

Both forbid ragged, frayed, or slit sleeves, and detail that sleeve length may vary between team members but that each player must sport two sleeves of the same length. If a player wears an undershirt visible beneath his uniform top, it needs to be a solid color and all teammates must wear the same color. No player may wear a white, long-sleeved 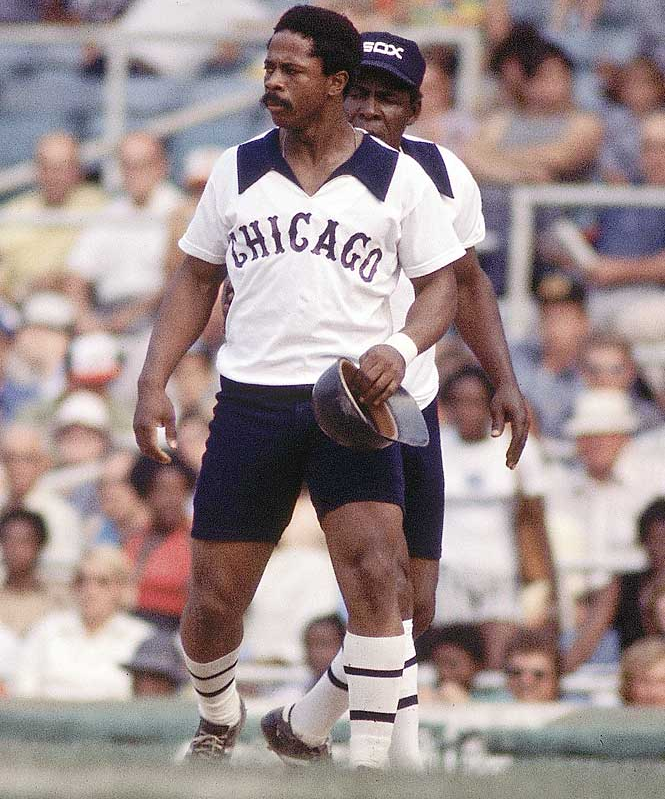 undershirt although any other color is allowed. No part of a uniform can resemble a baseball.

Aside from some rules on jewelry, shoes, and pitchers not distracting batters, that’s about it. Notice anything missing?

That’s right: pants. And caps. There is nothing in the rules that requires a team to wear pants. While there is a rule that says all members of a team must wear identical uniforms, an entire team can go without pants and remain within the rules. The same goes for caps. If the entire team goes hatless or all wear berets, it’s within official uniform rules.

This explains the monstrous shorts the White Sox wore for three games in 1976. Note also in the photo the shirts, which were uniformly worn untucked.

After completing a comprehensive two-hour tour of Charlottetown, PEI, we went looking for a game of Bohnanza to offer as a gift to our hosts.

Between the two gaming stores in Charlottetown, one had the fan edition of the game, which we bought along with Monty Python Fluxx. As we were leaving, I spotted a tempting box: the Dungeons & Dragons Roleplaying Game Starter Set. The price was $20.

Elvi and I met because of a AD&D campaign we joined, and we played for six years, until our young spawn became too numerous and antsy to allow us the hours required for a session. When we quit, the AD&D world was in its second edition; our collection of books, modules, and knickknacks filled a bookcase.

Since then, AD&D has reverted its name to D&D and upgraded its mechanics to fourth edition, an entirely new system – and the one in this boxed set, with characters and adventure ready to go. I had to buy it. Once I bought it, the family and our hosts had a plan for rainy days.

Our impromptu group has had so much fun playing this that we’ve wasted a few sunny afternoons, too. Our girls love the game. Child One is a precocious halfling rogue and Child Two uncharacteristically chose a dour dwarf fighter. They are really getting into the game, and have created elaborate backstories for their characters. (Child Three enjoys it but the game is a little slow for him. He and Elvi are teaming to play a dragonborne paladin)

As a DM, I have to say that this edition is much easier to play and manage after adjusting to the new rules. The rest of the group had never played before but Elvi was little bit amusing as it took her longer than me to adjust to the new rules, like the fact that Magic Missile no longer hits automatically.

I’ve downloaded some free low-level modules, and maybe we’ll get the full-fledged rule books. I’m not sure I like the plethora of player character races, but meddling can wait a while. For now, it’s great to have found an activity a family of geeks of varying interests can enjoy together.