Jen relies on the automatic spell-check function of her software.

Jen makes pumpkin Nutella cupcakes and folds in the Nutella neither with her hands nor with a utensil. 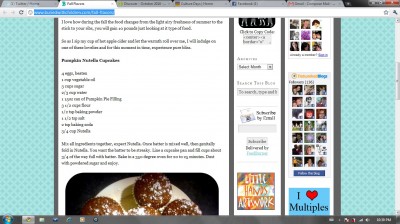 Jen, having been alerted to her error, has since corrected it.

As Child Two lay down in a bed tonight, she felt a painful bite on her thigh and another on her bum. That was the ouch. She popped up out of bed and saw an insect where she had lain. She whacked it to produce the smush. The photos here show the crime and the accused.

I got to look at the thigh bite and I accepted the maimed but still living beast.

A bug bites you in bed and the first thing you think is bed bug. Bug is the correct technical term, referring to suborder Heteroptera. This was definitely a bug of some sort.

The mangled bug was about a quarter-inch long. It really does sort of look like a bed bug. That would be my initial hypothesis, but bed bug bites are painless. No one in the house has had any bites on them until last night. The bites resembled wasp stings, each having a swollen area with a red dot in the middle.

I started to consider improbable scenarios, like Child Two had crushed a bed bug but had been bitten or stung by something else. I ruled out spider bites, which almost always have two marks from the two fangs. Besides, Montreal doesn’t have any spiders known for their bite.

The only thing that seemed to make sense was that we have bedbugs that don’t affect any of us, and that Child Two had rolled on an invisible wasp. I took a flashlight and inspected the bed but found nothing. I wasn’t ready to accept the two-culprit hypothesis so I hit the Internet.

My research led me to kissing bugs, which stab people with their sucking mouths and drink blood. There is a resemblance there, but they are larger than my mystery beast and have wings, which mine does not. Also, the closest kissing bugs live on the southern US. Their bites are also painless.

At some point, I learned that juvenile bugs (instars) do not have wings. Aha! Unfortunately, photographers focus on adult forms. An image search was no help. C’mon, folks – take some pictures of the kids, too! I also learned that assassin bugs can painfully stab with their mouths of upset. Aha aha! I confirmed my suspicions when I found Pest Control Canada’s insect identification service. Scroll down to case 1657, which a retired entomologist identified as “an immature assassin bug”. Look at the photo. It’s not quite the same bug as ours, but the resemblance is there.

I spent time trying to identify the species, but I can’t. I’m just glad it’s not a bed bug.

The idiots overwhelm me. I can’t keep up with them. There are too many to list in Roadrageous. I’d be doing nothing else with my time. I’ve had to give it up.