I’m not fond of the phrase “bucket list” but I’m at a loss to replace it with anything as snappy. I don’t even have such a list, per se. I dream small. I somehow lucked out with this family so everything else is just gravy.

Nevertheless, I have had one dream. I have never owned a new car and I’ve always wanted to.

I’ve spoken about some car history in this blog in the past but discretion prevents me from linking to it – although it didn’t stop me from writing about it. When I learned to drive, I could borrow my mom’s loaded used Chrysler Cordoba with manual T-roof or my dad’s used BMW 530i (1975-78 vintage). After my mom moved to Houston and my dad’s BMW self-immolated, I could borrow his used Hyundai (less than) Stellar.

After I returned from a carless four years as an undergraduate, I had the infamous used Renault Alliance foisted on me. And then I inherited the Stellar.

At that point, Elvi and I moved to California, where we purchased and drove a used Honda CRX and a used Honda Civic. Those served well, but we decided to return to Montreal with a minivan. We bought a used Dodge Grand Caravan from a French man who was himself returning home.

We were a single-minivan family until we found a second, I think. We had a series of used Dodge/Plymouth Grand Caravan/Voyagers, and some of those may have overlapped. We had but one when Elvi’s mom bought us a used Honda Odyssey that immediately started dropping paint flakes and rust. It drove well, and still does more or less, after thousands of dollars worth of repairs.

But Elvi dropped a bombshell on me. She told me she thought we (meaning I) could buy a new car. We don’t need two minivans anymore, if we ever really did. Best of all, one of the perks of her new job is access to X-Plan pricing for Fords, Lincolns, Mercurys, and Mazdas. X-Plan is a flat price of 4% over invoice: no haggling, great deal.

So I went shopping.

The first thing I looked was a Mini Cooper Countryman four-wheel-drive, but a lok at the price sent me reeling back to the Clubman S, which after taxes was a shade over $30,000. Of course Mini/BMW does not participate in Ford’s X Plan, so I used the Mini as a baseline for further research.

I quickly concluded that we could afford a sub-compact without the X Plan or a compact with it. The sub-compacts are too small, so options loosely broke down to Ford Fiesta (still small, but highly rated), Ford Focus, or one of the Mazda 3 family. My superficial nature fell in love with the looks of the Mazda 3 Sport (the name of the hatchback version in Canada). The 2010 and 2011 models look like the offspring of a Corvette and a Nissan with the raised fenders set off from the hood. Many reviews make fun of the smilish/stylish front grill. Reviewers say it looks like a goofy grin, but I love it. I think it’s snazzier than the ubiquitous split grills found on all Hondas, Toyotas, etc. out there.

All reviewers and raters agreed on how fun and good a car it was. A few mentioned the Mazdaspeed 3, which is a turbocharged, extra-large, 263-hp engine stuffed into the same chassis. We test-drove the 3 Sport and the Mazdaspeed 3. The 3 Sport was, well, sporty and fun to drive with its 167 hp. The Mazdaspeed 3 was a beast, incredibly fun, powerful, and not easily tamed. I spun the tires pulling away from the curb. I can’t see myself driving the Mazdaspeed 3 for more than 15 minutes at a time without mental fatigue and it’s quite a bit more expensive, to boot.

So we signed to buy last night a Mazda 3 Sport GS in copper red with a six-speed manual transmission. We added winter tires on rims, winter floor mats, a rear bumper step plate (don’t want the goalie equipment to scratch the paint), and bi-xenon headlights! It’s not an official option for the GS, but my dealer said no problem for only an extra $220 or so.

I wanted a dune-beige interior, but there are none available in Canada at the moment, and none on the way. Because this was an X-Plan purchase (with a graduate rebate on top of that), I couldn’t make a special order. For $23,013 ($26,217 after tax), I can live without the black. It’ll cost $430 a month for five years, which is a great deal but still more than my first apartment.

Apparently, the only copper red Sport GS in stock in the country is in Vancouver, so it will take three weeks to get it. It’ll look quite a bit like this: 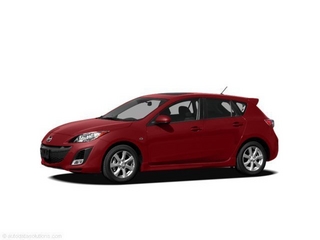 One thought on “Cross one off the bucket list”