Yes, my finger is broken. The softball shattered the bone in my fingertip; the technical name for it is a distal phalanx tuft fracture. You can see the main splinter and some pulverized bone in the x-ray.

The nail was not bent but completely split and is indeed responsible for all the blood.

I have a bandage the size of a sake cup on my finger. When that comes off, I have a splint to put on. (The splint won’t fit over the bandage.) I received a tetanus shot and I’m taking cephalexin to ward off other infections. I have Dilaudid for the pain, but it’s not working yet. It doesn’t work on my migraines either.

I must have jinxed myself, eh?

So there I was, pitching softball in the top of the first.

Oh crap, I just bled on the Q key.

The ball hit my fingertip flush. It crushed my fingernail and bent it about a third of the way down. The edge is digging into the nail bed and it’s bleeding. Worse, I think my finger broke. Under all the blood, the last segment of my finger is purple and swollen. It may even be crooked.

Here, you tell me: 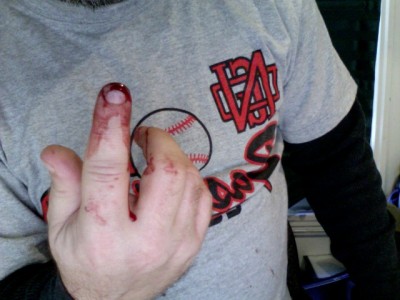 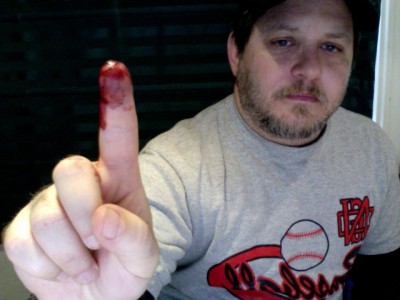 I included a normal halfling finger for comparison here: 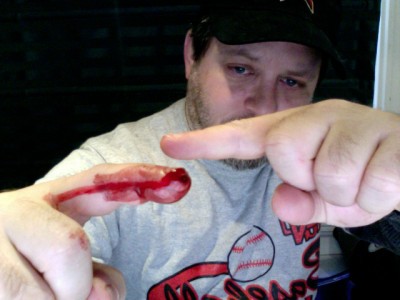 So, who thinks it’s broken? I’m off to spend the rest of my weekend in the emergency room with a low-priority emergency. I’ll let you know when I get home.

My CPAP therapy is working. It’s no miracle, but I have more energy these days, and I’m using it up. I’m napping less, but my sleep doctor says the naps aren’t a problem; they’re “nothing pathological”, in his words.

I need the energy, because I’m expending it. I am teaching two classes this semester. It’s Jour 202, which I’ve taught before, but the class has evolved from an introduction to the Internet and desktop publishing into an introduction to digital tools. It means more work for me, as I have to prepare quite a few classes from scratch, but I’m eager to do it.

Freelance work has also picked up. I’ve been training folks who throw around terms like Agile and .NET, turning them into newbie journalists for InfoQ. My computer and Web consulting has also picked up. I’m not doing as much writing as I’d like, but I will tackle that when the semester ends in early December.

In other news, I am once again the figurehead atop a team of hard-working kids (the Cougars). Child Three cracked the A-level of Peewee in his first year, and he’s doing well. All the boys on the team are. We have a good group this year and I will be disappointed if we finish lower than third in the league.

Children One and Two, meanwhile, have a new hobby that may involve the maiming of other parents’ daughters. Here’s a preview:

That’s Child One in yellow and Child Two in black.

My own physical activity has picked up. I’m playing hockey as a spare roughly once every two weeks. I’m playing softball once a week as long as the weather holds up. I’m even back to running hockey practices.

The big news is that today I finally ordered a cell phone. Siri, who was the only 45-year-old in Canada to own a home but not a cell phone? Yes, I’ll be getting an iPhone 4S. It’ll be white, at least when it shows up. I’m thinking of not giving out my number. If I do give it out, people will call me and I can’t have that.

The Journalism Department invited a speaker to speak to all the first-year students on search-engine optimization. One of her pearls of wisdom was to write numbers in ciphers (e.g. 7) instead of in words (e.g. seven). Guess what? Google doesn’t give a crap which way you express it. The cipher and word are synonymous in a search. I wonder what other 15-year-old advice she had for the students….