We never knew this story until Tuesday, when we cracked open a scrapbook that once belonged to my grandfather’s brother, Max.

When Jacques (my grandfather, although he went by “Jack”) was a kid in the Netherlands, he owned a small dog. His father, Bernard, thought that a big photo of their boys and the dog to hang on the wall would make a great present for his wife, Josina.

The photograph was taken, blown up, framed, and presented to Josina. She took one look at it and exclaimed that there was no way she could hang that in her house. She pointed out the dog, which had an erection that the males had somehow overlooked. 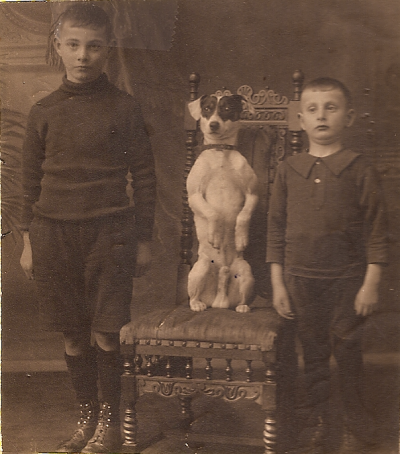 That’s one well-endowed terrier. Jack is on the left, Max on the right.

The gift was modified by the 1920s’ version of Photoshop – that is, an artist – and the final product, um, hung in their home for 50 years. I don’t know what happened to that, but thank goodness we have a print of the original. Jack was born in 1914, so I estimate that the photo was taken around 1925.

The dog’s name, even before this photograph, was Dickey.

But 1925 wasn’t Max’s last appearance in a photo with a strange dog. 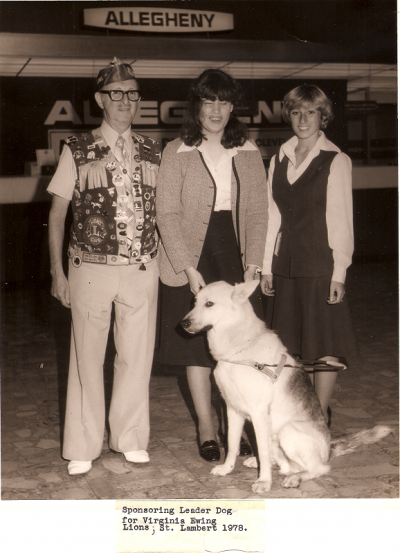 That’s a trained dog, allegedly, but the look on its face says, “If you take my picture, I’m going to kill somebody.” This has meme potential. 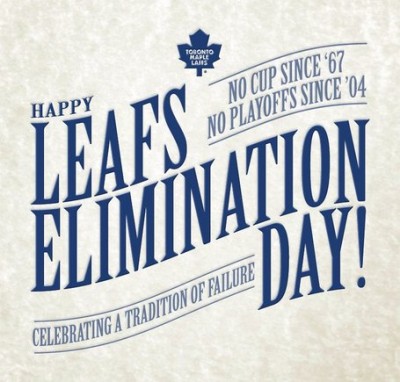 In a previous blog, we established that my dad hoarded junk. He also hoarded useful items. Elvi was working on the garage, and she came across my dad’s caulk.

She couldn’t believe how big my dad’s caulk collection was. It was massive: enough caulk for three houses.

Here’s a pic of her and my dad’s caulk:

Much of Sunday was spent going through Dad’s clothes with Brother Two. Brother One (both are younger than me, by the way) wasn’t yet in Freeport and the clothes wouldn’t fit him regardless.

We found a lot of clothes… – from the ’70s, let’s say to be charitable. And what better way to celebrate the ’70s than with a slide show! 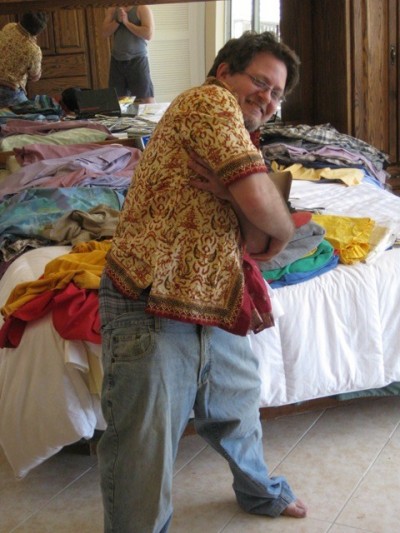 You may have noticed that I put a modern twist on the jeans. I think my favourite bit of these photos is my brother’s hands clasped with glee in the first picture.

That wasn’t all the clothing-related hilarity. After some delicious snapper and cracked conch (best I ever ate) at Billy Joe’s on the beach, Elvi bent over to wash her hands in the ocean. Two ladies and a man walking by in the right place at the wrong time got an eyeful of her underwear as her shorts ripped from stem to stern. The man cracked up – you can’t blame him – but the helpful ladies gave us a towel to keep.

I used the towel to highlight the damage. 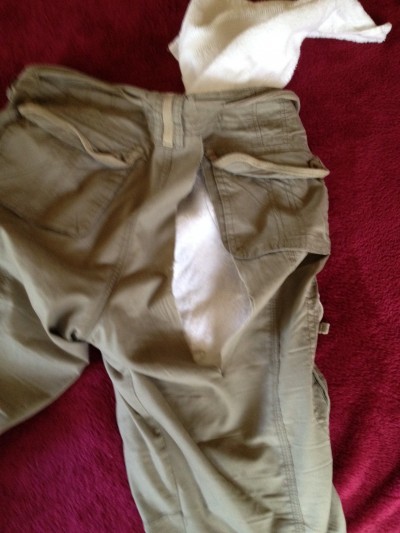 Elvi, learning from my father’s poor example, did not keep the shorts.

If you think I’m fat, check out this curly-tail lizard. 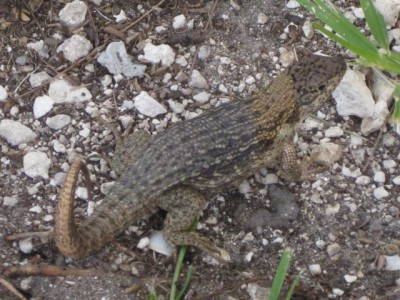 At least I signed up for flag football this spring and summer.