This is the time of month when I list the accomplishments of my fantasy baseball team.

These were my starters at the beginning of the year, and I added Marco Estrada whom I picked up at the start of May:

These were my healthy starters Sunday night:

Narveson and Luebke are out for the year. Chacin and Carpenter are still not throwing. Lilly and Estrada are expected to miss weeks, possibly months.

I added Travis Wood on Monday but there’s no recovering from this disaster.

It doesn’t help that my power has disappeared.

Last time, I established that I come from a line of antagonists. This post, we move from the theoretical to the practical.

A few months ago, I discovered that Navigon was on sale in the US iTunes Store for around half price. I bought it, I used it, I like it. Setting a target address is a little annoying – you have to set the city, then the street, then the number instead of typing or pasting it all in at once. Other than that, and a few pronunciation errors, it works great.

(I think the Quebec map has built-in French pronunciation, which reads “chemin” perfectly but requires five syllables for “Mountain Sights”.)

In February, I heard about Waze, which is a free, crowd-sourced GPS navigation app. You can use it for free and live with the reasonably correct maps. Or you be like me and start editing those maps to make them better.

From what I gather, Waze started with a satellite map and had an algorithm (or slave farm) find and plot the streets. After that, users took over and continue to edit the maps into shape. We name streets, set the street directions and types, mark legal and illegal turns, etc. The central Waze brain monitors drives and alerts editors to mistakes they may not know about. Drivers can also send an alert to the system to be dealt with, whether that alert is an incorrect map issue or a traffic jam. The app requires a minuscule amount of data transmission but it’s worth it. Map-editing is perfect for those of us with compulsion issues.

There is a slight problem when it comes to editing: too many cooks spoil the broth. While the Waze wiki provides some guidelines for editors, there is no firm standard for mapping and no oversight. This leads to problems, which is where the antagonism comes in. Remember the antagonism? It’s between cooks.

Some people get a kick out of editing the maps, and for us, there are two primary annoyances. The first is idiots who go on the map and make global changes to amass Waze points with no consideration for accuracy. That’s why, for example, the current map features “Ville St. Laurent”, “MontrÃ©al (Saint-Laurent)”, and Saint Luarent”, among other variations for the Montreal borough and former independent city of Saint-Laurent. It’s a huge pain to fix that to the accepted standard (the second one, by the way).

Montreal provides rare challenges to map editors because of the language situation. Street names of more than one word take a dash according to the Quebec government’s strict toponomy, but the cities don’t always follow that rule on their signs. French names take a hyphen (Boulevard RenÃ©-Levesque Ouest) but English ones don’t (Avenue Mountain Sights). The island is ÃŽle Perrot; the city is ÃŽle-Perrot.

One of the features/bugs of the usage of Montreal street names is that rarely do we use the generic part of the street name. We say, “Take a left on Saint-Denis,” not “Take a left on Rue Saint-Denis.” We say, “It’s near DÃ©carie and Queen-Mary,” not “It’s near Boulevard DÃ©carie and Chemin Queen-Mary,” or, heaven forbid, “It’s at the corner of DÃ©carie Boulevard and Queen Mary Road.”

Of course, when you use Google Maps to look up street names, all the streets are listed with the generic indicator. Official municipality maps, such as Dorval’s, often skip that formality. Driving and looking at street signs doesn’t always help as many of those are also missing the generic indicator for reasons found at the intersection of budgets and anti-English politics.

It’s my contention, then, that to make a better GPS app means taking into account these real-life considerations – but I’m just one cook.

Two super-users constantly “patrol” and edit the map of Montreal in Waze. The Waze forum allows users to send messages so I know about about the other guy. He’s a francophone Montreal police officer (that’s a bit redundant…). He goes by something like Duff, so let’s call him that.

Duff is all about the rules. I’m all about accessibility. If it were up to him, all roads would have their full names. We have battled a bit about Chemin de la CÃ´te-Saint-Luc, which to me is a ridiculous thing to put on a map when everyone just calls it “CÃ´te-Saint-Luc”. Similarly, who cares if it’s Avenue O’Brien, Rue O’Brien, Chemin O’Brien or Boulevard O’Brien? The advantage of not putting down the street-type designations is twofold: it cuts down on map clutter and it better matches the street signs that drivers see.

Duff disagrees. Early in my Waze phase, we battled over naming, until coming to an unspoken agreement. I stopped changing the names of major streets (e.g. Rue Saint-Urbain) and he stopped renaming minor streets and streets with ridiculously long full names (e.g. Chemin de la CÃ´te-Sainte-Catherine). Together we have converted E and O to Est and Ouest, St. to Saint (to avoid Waze pronouncing the abbreviation as “street”), and put missing French accents into town names (MontrÃ©al, not Montreal). We also have begun using abbreviations for boulevard (Boul.) and avenue (Av.), both of which Waze pronounces correctly, in English at least.

Waze has a problem with accents. It pronounces DÃ©carie as “Dee-Ay-copyright-caree”. I think it’s better to leave the accents in and wait for the system to catch up than to poke language purists. The Waze disagreements are language issues, but not typical Quebec head-butting language issues.

After I capitulated on streets like Rue Saint-Jacques and Rue Jean-Talon Est and Ouest and he left the CÃ´tes alone, we have an uneasy ceasefire, with hotspots. Duff and I are still at war in Verdun and parts north. I think he wants to set full names on every street that is indicated by an exit. We bombard each other with changes over des Irlandais, Riverside, Mill, Oak, Marc-Cantin, etc. He also likes to invade LaSalle and change the lonely streets west of Angrignon – uh, Boul Angrignon: Senkus, Cordner, Lapierre, etc.

That’s not all I do, though. I have completed every street and intersection in Hampstead, CÃ´te-Saint-Luc, MontrÃ©al-Ouest, and the boroughs of Lachine and Saint-Leonard. I’m halfway through Dorval. I’ve completed large chunks of LaSalle, Saint-Laurent, and within the pre-merger boundaries of Montreal proper.

I feel I’m rambling a bit so I’ll cut out now. I do heartily endorse Waze, even if you’re only a consumer of it rather than a contributor. The traffic updates alone make it worth the price.

I come from a long line of antagonists.

My dad’s mother died a few months before I was born and my grandfather was not a capable bachelor. He met a slightly older woman on a cruise and they got married. Then they got divorced. Then, on her terms, they got married again.

My grandfather needed someone to take care of him. His wife was willing to do that, for a price. It was a marriage of convenience. It was certainly not love.

This woman was the only grandmother we knew on my dad’s side and, as kids, we knew none of this. Nor did we know that this grandmother and my dad shared a white-hot hatred for each other. They hid it well. But this isn’t about my dad, yet. This is about my grandfather.

There was a certain amount of resentment mixed into the convenience. My dad rarely told us much, so I only heard this story from his Wife Two. My grandfather had somehow discovered that his wife detested the phrase “bum wad” as a synonym for toilet paper. Every chance he got, he’d use “bum wad”. “Frances, when you go to the store, pick up some bum wad.” Oh, that must have been a jolly household.

You know what just occurred to me? This was my step-grandmother’s first marriage. She had short hair. She always wore pants. I can’t recall ever seeing her in a skirt or dress. Maybe she was gay.

Anyway, that was my grandfather. My dad’s attitude can best be explained by the following printout I discovered while cleaning up his office in March. 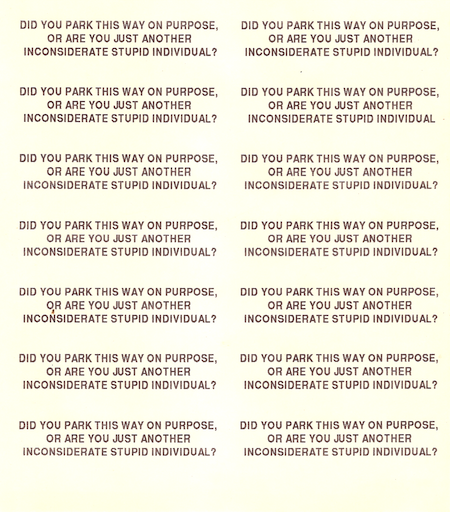 Note the dot-matrix quality of the text. The printout had been laying around a while.

The sheet speaks for itself. I don’t have to make any more comment – well, except to point out that it makes more sense if you replace “on purpose” with “by accident”. The red cloud of vendetta can muddle one’s editing ability.

So that’s my genetic heritage, which sort of explains this, although a) my vendetta is more passive; b) my vendetta was actually carried out until it overwhelmed me; and c) I never bought a paint gun with which to peg speeding jet-skiers in the canal behind my house.

I was going to go on and explain the Waze bit, but I think I’d rather take a nap now. Stay tuned for part two.