Now that I have a Zip drive in hand and working, I’m going through a box of old Zip disks before I throw them out.

Scoff all you want, but I have found some treasures to hoard. I know have a backup of my CompuServe account (I was member 73144,2466). I found a few documents left over from my time as a sysop in the Dinosaur Forum. Here’s one:

This recipe has been tested and actually worked. Still, I take no liability if you burn down your kitchen.

Get a thick wax candle and carve it into a bone with a knife. Try to get a bone that does not have wick in it. Get a big foil roasting pan (the size used for turkeys) and carefully cut a hole in the bottom just large enough for a piece of wide-bore heat-resistant tubing. Stick a piece of the tubing in so that about an inch sticks up, seal it in place with some heat resistant sealant and trim off the bottom.

Balance the wax bone on the top of the tube and seal it there with sealant.

Fill the roasting pan with enough plaster or something to cover everything. Be careful not to jostle the wax bone.

When the plaster is dry, stick the whole shebang into a hot oven (check the melting point of candle wax for how hot). Place the contraption over a dripping pan. If this works, the hot wax will run out the tube leaving a bone-shaped hole in the plaster. You might have to shake the thing to get all the wax to run out.

When the wax has run out, let the pan cool. Get a lot of castable resin and pour it in the tubing so that it fills the space where the wax used to be (I guess you can also use molten bronze instead). Let it dry.

After it dries – voila! The plaster is the sediment, the heat is the water leaching out the bone and the resin is rock minerals replacing the lost bone. Kind of.

I also found an archived copy of WarBirds 1.11r3, which measured a tiny 38 MB in size. I’d need a System 9 emulator to run it, but it’s neat to have.

Best of all, I found some photos I don’t have elsewhere, taken in the Bahamas in the winter of 2001-02. Here’s one. 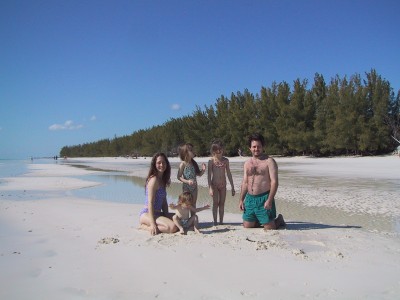 Elvi and I went out to a new bar with some of her choir mates last night. (Given its location, I guess the bar will have a lifespan measured in months.) We were the last of our group to leave but Elvi went to the bathroom just before we did.

I half-stood, reaching into my front pocket for my car keys but awkwardly sat down again at our table when I realized it would be a few minutes. A guy was standing there as if he wanted to grab the table for some other group of friends. I told him he was welcome to sit down.

He sat right next to me. A few seconds later he amiably said, “You look like you need to have a giant fucking shit.”

I explained that I’d decided to leave my keys in my pocket until my wife came out of the bathroom. At that, he got up and left.

The only thing that makes sense to me is that he had pitched me some sort of come-on. The bar was very gay-friendly. It’s the only explanation I can think of.

Child Two and I took I took Child Three and some of his friends to paintball today. A grand time was had by all, especially by those of us who escaped without wounds.

Child Two and I formed an effective fire team in the latter games. We got ourselves into enfilade positions and ripped through the opposition like the killers we are.

My favourite moment of the day came when one kid crept up to the corner of a building to get a shot at Child Two. I let loose a volley of five shots and all landed. I saw my target dance a little and disappear behind the wall. I learned afterward that four of my shots had hit his hand and made him drop his gun – uh, drop his marker. My trophy: 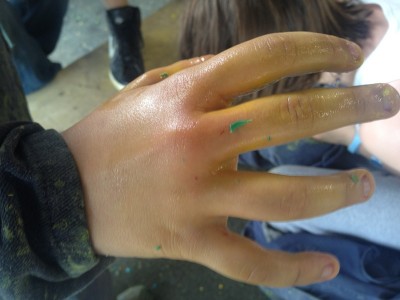 Child Three got hit three times on the bicep in the last fight: 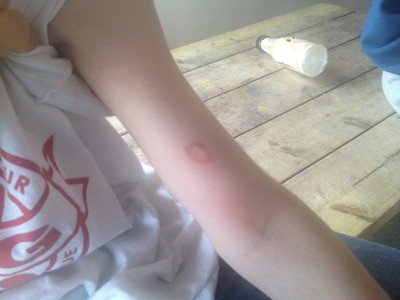 It look like two hits, but the top welt is two hits stacked. The lower, fainter welt shows up much better this evening than it did when I took the photo.

Here’s a masked “before” photo and one from a break in the action. 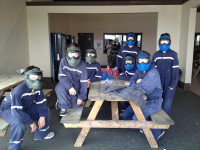 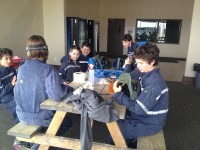