Robert Kovacik, a reporter with KNBC in Los Angeles, is in London for this year’s Olympics. Yesterday, the station aired his report on Mitchell Flint, who used the 1948 Olympics in London as a ruse to cover his volunteer service as a pilot in Israel during the War of Independence. For much more on his experiences, visit the link on his name, which takes you to my historical 101 Squadron Web site. 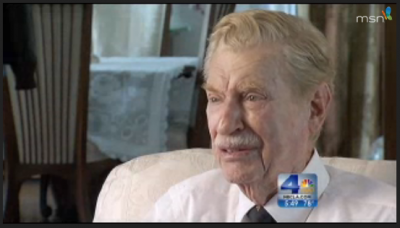 Attendees of the 1999 WarBirds convention in Palm Springs, Calif. may remember Flint as one of the three 101 Squadron veterans who came to speak and experience our fanaticism, along with the late Rudy Augarten and the late Aaron Finkel.

Another month, another gun rampage, another anecdotal bullet in the clip of those who argue for banning guns and for those who advocate a thoroughly armed populace.

The CDC breaks down the numbers further. Slightly more than half the suicides (19,308) and about two-thirds of the homicides (11,015) were caused by firearm.

It goes without saying that the total number of homicides is dwarfed by other causes of death. Even if you factor in the shock of an unexpected death, accidents are far more prevalent. The gun issue simply doesn’t merit the energy it consumes.

* Although Statistics Canada has not released data with firearm suicides as a separate category since the early 2000s, 16% of all suicides was the rate then and is used here. This rate was higher in the ’90s, around 22%.

A huge difference between the countries lies in homicide rates. Americans (5.2/100k) kill each other three times as frequently as Canadians (1.7/100k) and they are six times more likely to do so by shooting a gun. But let’s remove all gun homicides. Americans kill each other without guns (1.6/100k) more frequently than do Canadians (1.2/100k) but the difference isn’t nearly as drastic.

It’s a much different situation across the globe. I took data from the Guardian and added more relevant content. Take a look at my spreadsheet (it’s not a comprehensive list of countries as I removed any with incomplete data).

The spreadsheet is sorted by total homicide rate. Note that 17 of the top 20 countries are in Latin America or the Caribbean. Why would that be? These countries do not have particularly high numbers of guns per capita. Gun-lousy countries like Serbia, Finland, and Canada all have much lower rates of homicide. Gun prevalence is roughly equal to or higher than the top 20 in eight of the countries with the 20 lowest rates of homicide.

Conspicuously grouped at the bottom are France, Norway, Germany, Austria, Greece, Denmark, and Spain. A few other European countries are not too far away. Switzerland with the third most guns per capita ranks 21 from the bottom.

You can probably guess where I’m headed. I don’t think gun ownership has anything to do with homicides. Certain cultures are inherently more violent than others. Whether they have guns or not is beside the point. The non-gun homicide rates track extremely well with total homicide rates.

It’s a cultural difference. Some cultures are simply more violent. Sometimes the difference is huge. Other times it’s subtle – but I truly believe that Americans as a whole are more violent than Canadians. We do not share the same culture. We do not share the same approaches to the balance of community versus individual. The gun control question is practically moot, a secondary consideration.

American and Canadian national suicide rates are the essentially identical, and have been throughout the last decade – although Americans will use a gun more often. That’s not surprising. Roughly 3 million Canadians in 26% of households live with at least one gun, Justice Canada tells us. According to a recent Gallup poll, the corresponding figure is 47% in the US.

If Canadians owned guns at the rate Americans do, gun suicides would probably increase, but would the extra suicides pad the total or simply replace more cumbersome methods of offing oneself? Fortunately, researchers have studied this.

Miller et al (“Household firearm ownership and suicide rates in the United States”) found in 2002 that “a robust association exists between levels of household firearm ownership and suicide rates.” Many suspect that the immediacy of the act of shooting a gun versus more cumbersome and less successful methods leads to both more attempts and more successful attempts. A position paper from the Canadian Paediatric Society has more citations that lead to the same conclusion. In short, fewer guns means fewer suicides. (There’s a corollary: fewer guns in Canada means we would otherwise be killing ourselves more often. Blame Canada!)

Suicide is the forgotten variable in discussions of gun control. Far fewer folks shoot someone else than shoot themselves. I’ve maintained for years that the question of gun control is a question of suicide, not of interpersonal violence or home defense.

The rate of gun deaths among various nations follows the total homicide rate fairly well, which indicates not that guns are the problem, but that cultures of violence among countries are the problem. The only stat that defies the curves is gun suicide. Having guns around really does make it a whole lot easier to kill yourself. Those who consider suicide a health problem should find free gun ownership a problem.

(Actually, I lie. Accidental gun deaths also increase with gun ownership, but the number is so tiny, it’s not significant enough an event to base policy on.)

From the Canadian Paediatric Society paper:

The presence of a firearm in the home has been shown to increase rates of homicide and suicide compared with homes without a firearm. In studies of adolescent suicide conducted by Brent et al, the presence of a firearm in the home was found to be a strongly positive risk factor for completed adolescent suicide. Apparently, the adolescent without a firearm in the home is more likely either to use a less lethal method or to not attempt suicide. Birckmayer and Hemenway analyzed the relationship between suicide rates and household firearm ownership for four age groups. They found that firearm ownership was correlated with increased suicide rates for 15- to 24-year-olds and 65- to 84-year-olds, but not for 25- to 64-year-olds. This suggests that the availability of a firearm in the home is a suicide risk factor for some, but not all, age groups. It is likely that certain developmental characteristics of adolescents, such as impulsivity, sensitivity to peer pressure, and experimentation with alcohol and substances, are responsible for this effect.

Thirty years ago, I was preparing for my last year of high school (which in Quebec ends after Grade 11). I was also coming off my rookie year as a member of Bialik High School’s Reach for the Top team.

Reach for the Top was a Canada-wide high-school quiz show on CBC. Our school was always a strong contender in Quebec, but I had the misfortune of going to my high school at the same time as Gerry Moschopoulos, who was probably the best player in the province, attended Malcolm Campbell High School. In my first year, Gerry and three other people knocked us out of the competition.

In Grade 11, there was turnover on our team. David Cape and Arnold Cohen graduated. I made the ’82-’83 team again. David Tanenbaum and the futurely infamous Kenny Hechtman joined us. Our star was Lorne Beiles. He was in my class, but I don’t remember if he’d been on the team the year before.

Our coach both years was Bryan Wolofsky, whose son and mine took a bar-mitzvah program together this past year.

One of the things I did while cleaning up my dad’s house was to look through old media. My brother Jeff hoarded all the film but I got to pick through some videotapes. Among the collection was a treasure that I’ve had digitized and I’ve uploaded it to YouTube. It’s about 110 minutes long, so you may want a snack.

May I present Bialik High School’s 1982-83 “Reach for the Top” performance in its entirety.

Even if you have no interest in my quiz-show history, you’ll love the vintage Canadian commercials.