I was flying high three weeks ago, touching third place. Then my pitching took a vacation for a week, losing seven points and sending me plummeting to ninth.

On the bright side, I almost got to pick up Adrian Gonzalez. I had second pick, though, and opted for yet another pitcher, Tyler Skaggs. That was fortunate as I lost another starter this week when Pittsburgh dumped Erik Bedard. All is not quite lost, though, as I’ve regained four of those lost points in the last four days.

I have a headache. Please excuse me for not posting the list of stats. I’m sure one or two of you are disappointed.

Elvi and the girls are on the road to Chicago where they will attend Chicon 7, the 70th Worldcon. The boys are staying home to go to high school, sit around in underwear, and pee in the dining room.

My hand is healing nicely. The infection is down to resembling a pimple about a centimetre in diameter. The wound is still there but healing. I should be OK for the flag-football championship game tonight if my knees hold up. I’ve lost four pounds this summer, whcih is a nice change from the year on the gimpy ACL.

I’ve been meaning to put up a post of all the animals I took photos of in Maine. Unfortunately, I didn’t think to take a pic of the squid or mackerel.

Students to whom I lectured about Wikipedia may remember this story (scroll down to the changes in 2007).

I’m in bed and not feeling so hot. By bed, I mean between two sleeping bags on top of an air mattress.

Crash and I woke up first this morning, around 9:30. I let him out of the tent so he could pee on our campsite rather than in our tent. I followed him out but didn’t leash him since he nearly always sticks close by and he can no longer run. He instead chose to wander to the next campsite.

He walked over there and he tried to crawl under a picnic table stocked with food. I ordered him to stop, which usually works but didn’t. I bent to gently guide him backward and and he snapped, literally.

His canine punctured the palm of my hand. It bled for 15 minutes and I put Ozonol on it. It was no big deal.

After breakfast, we went to buy some cheap fishing gear and two fishing licences. Child Three and I spent the afternoon fishing from the pier in Searsport where we acquired three mackerel from the waters of Penobscot Bay. We traded them to another angler for three cleaned squid. No cleaning? Definitely worth the trade. The squid had mantles about eight to ten centimeters long and – I just had a taste – are delicious. It’s much better than frozen. I guess $30 mackerel/squid is the fishing tourists equivalent of the private pilot’s $100 hamburger.

I noticed during the afternoon that my hand was hurting up by the knuckles and that worried me a bit. While the family set up for supper, I headed off to Waldo County Hospital. Elvi’s insurance covers travel medical care.

After a bit of difficulty registering my foreign address, I saw a nurse.

“What happened?” she asked.

“My asshole dog bit me.”

I explained why he’d bit me and over the course of my visit I must have told five people that the dog had all his shots so we unfortunately didn’t have to cleave open his head (standard procedure for a rabies test).

“Can you describe your injury, please?” the nurse continued.

I lifted up my palm. “Stigmata!” I was feeling punchy, I guess. She laughed.

The exam showed I had a fever and an infection. They debrided the wound (ouch), washed it with iodine, and gave me amoxicillin. I also got a DTP shot because I couldn’t recall the date of my last tetanus shot. Five minutes later, I remembered that I’d gotten one when the softball obliterated my finger last October.

By the time I got back to the campsite, I was feeling chilly, headachy, and nauseated. It may have been psychosomatic but I felt like crap. I’ve been in bed since (it’s 9:00 p.m. now). I have a large bandage on my hand and I’m under doctor’s orders not to lift anything or otherwise exercise my right arm.

I put no links or photos in this post for now because I have better things to do than wrestle with the WordPress app on my phone.

Sun, not too hot, no mosquitos. 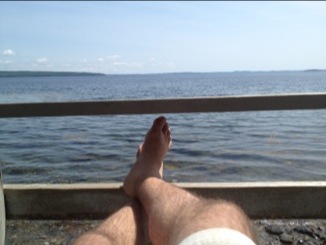