I appear to manifest power failures. I told Child 1 that I feel like a mutant X-Man. She said I would be the crappiest X-Man of them all.

It started yesterday when I was at the dentist. Not at the dentist, though – the power failure happened at home. When I got home, I discovered the damage, and damage it was. My iMac, my beloved Bender, would not boot.

I couldn’t get the chime to even sound. I would unplug the thing and plug it in again to reset the SMC, but the best I could manage from that was a whir that died after a second. I’m not sure if it was the hard disc or a fan. Does the 27″ iMac even have a fan in it? Regardless, this was obviously a hardware issue and not something I could fix myself.

At the Apple Store, the genius (I can’t type or say that without sounding sarcastic even if I’m not) plugged in and tried to start the iMac. He got the startup chime, but nothing else. On his second try, the chime eluded him as it had me.

I’m oddly optimistic. It’s like I’m paying $130 for a forced staycation. All my clients are understanding and none need anything right now.

So, as part of my forced time off, I decided to catch a movie tonight with Child 1, the only family member who was both home and willing to go see “Snowpiercer”, an apocalyptic SF tale that’s a cross between “The Road Warrior” and “Murder on the Orient Express”.

The first two-thirds of the movie captivated me despite some wooden acting on the part of the lead, whom I didn’t recognize but whom Child 1 informs me is Captain America. Everything else worked.

I can’t say I’m disappointed with the final third of the film because the theatre and the mall it is in suffered a – yes – power failure. We sat in the dark for 15 minutes before the theatre staff decided that there wouldn’t be time to show the rest of the late show. They gave each of us a free admission and an offer to come see the rest of the movie at another time.

All I need now is a mutant name. I’m thinking of the Brown-Out Aura.

On March 24, YouTube sent the following notice about the half-minute “Futurama” clip I had uploaded to illustrate my point in “Futurama commits clownslaughter“.

This claim is penalizing your account status. Visit your Copyright Notices page for more details on the policy applied to your video.

When this happens to you, you have two options. You can succumb to the man and take down your video or you can contest the accusation at risk of losing your YouTube account.

I contested. In my reply, I claimed fair use of the clip for illustrative and educational purposes.

What do you know – FOX agreed. I got this today: 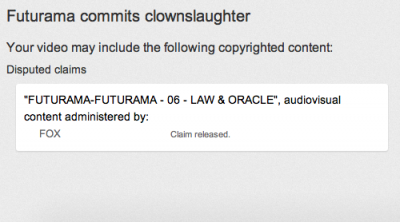 I started watching “Saxondale”. Despite stumbling into British comedy gems of the latter aughts like “The IT Crowd” and “The Inbetweeners“, I hadn’t heard of it before. That’s doubly surprising considering how much I enjoy Steve Coogan’s work.

The show lasts only 13 episodes, but it’s a hearty meal. The enjoyed the first season more than the second, although the second was funnier. Maybe it was the change in Tommy Saxondale’s hair.

Coogan is a master in the role. It may have helped that he was a co-writer of the series, but he creates a fantastic character, with body language and every nuance organic to the man. It’s quite something to watch. I could write an essay on the use of his lips alone.

The marketing of the show is odd. It focuses on the fact that Tommy was a roadie and is in anger management counseling. That’s true, but almost incidental to the show. Saxondale is an incredibly intelligent and principled man. Is there another ex-drunk/drug addict exterminator on TV who could give a speech like this?

OK, so there probably isn’t another exterminator on TV, but that’s beside the point. And so is the aviation-related rant.

(The large-figured lass in purple is Tommy’s girlfriend, the other woman is her friend, and the younger man is Tommy’s live-in employee.)