Here's a simple page for a simple idea.

I was in the process of filling everyone in at 8:30 AM Saturday (25th) when power and cable went down. My guess was that it was preventative.

I finished the boarding up, securing, etc. by 11:45 PM Friday night. Second time around, I was more careful and cautious about the integrity of my work. Somebody up there was watching, because Ken, Barbara'a son came over to help with the "four hands" jobs. I was behind schedule as I had gotten up at 5:00 AM to make preparations to fly my plane BACK to Ft. Lauderdale early in the morning and get back in time to say goodbye to Tracy, Greg, Amanda & Jamie, who had cleverly booked their return for the day before the hurricane! Also, there was still a lot of work remaining to be done. We had had an abbreviated Erev Yom Kippur meal around 8:00 PM and then finished the preparations. Good thing I heard on the radio that a "real" rabbi from Florida had said that all necessary for self protection took precedence over the normal observances.

Saturday morning I was up earlier to take care of a few things left undone: the satellite dish to take down; the pool to fold and put away; a leaning casuarina tree to be tied to others; and a few other odds and ends.

By 10:00 AM it was getting very "breezy". Frances was a Category 2 and perhaps had 80 MPH (130 km/h) winds here. Jeanne was a healthy Category 3 with 115 MPH (185 km/h) winds. How can I describe it? As with witnessing a hockey game, Formula 1 auto racing, or an airshow live in person, one can never get the feeling of the awesome speed, power, and sound from watching it on TV. The closest resemblance I can think of is watching through a side window, from a passenger seat in an airliner, on approach to landing in a driving rainstorm, but you don't get the sound effects!

Didn't I say recently that one of these in a lifetime was quite enough? Well, two most definitely are. It is a humbling experience and a reminder how insignificant we are.

Surprisingly, there was very little additional damage. I'm sure that the prolonged effect of Frances was more devastating than the quick, more powerful punch of Jeanne and that the poles with rotted bases, trees with poor root systems and buildings inadequately built had already come down.

Even more surprising was getting our power back Sunday night about 7:15 PM and the phone shortly thereafter, although the phone is out again at the moment (8 AM Monday).

Outside, it looks like a typical northern fall scene; all the trees and shrubs have been stripped bare again. The air conditioning helps to condition the mind to that scene, until you stick your head out into the 80°F and high humidity air and realize you are NOT going to see frost on the lawn this morning!

Did I give you the impression that it was all bad? Sorry. I think it was yesterday morning that I decided to check out our scale. I stepped on it and then got off to see if it was working right. Then I went to get my glasses to see if I was reading the numbers right. I probably weighed myself last about a week before the first storm preparations, so that would be a month ago. I have lost 14 lb during this period! Even hurricane clouds have silver linings! 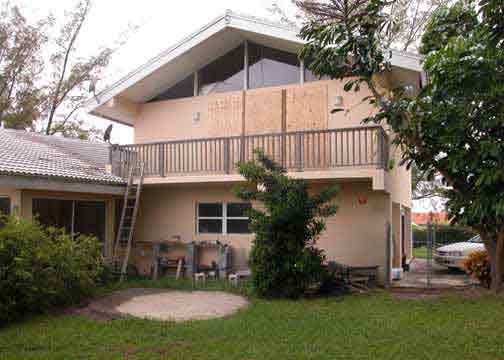 The top floor is the master bedroom, with unfortunately tricky roofline windows that went without plywood shielding. The circular spot of sand is the pool platform. Note the screens on the patio to the left of the ladder. 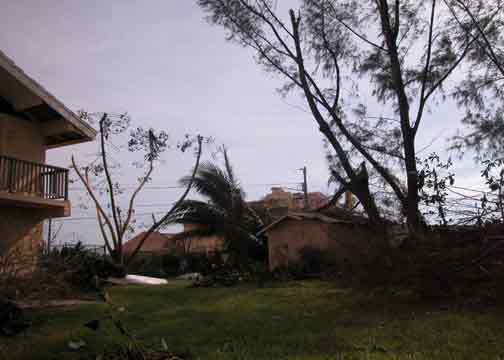 The four bare branches next to the house are the bushy tree to the right of the house in the picture before this one. 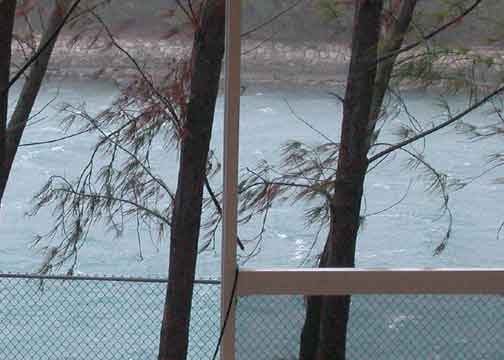 The canal scene doesn't reflect the action. You can't see the horizontal rain spray nor the two-foot waves which came in spurts. 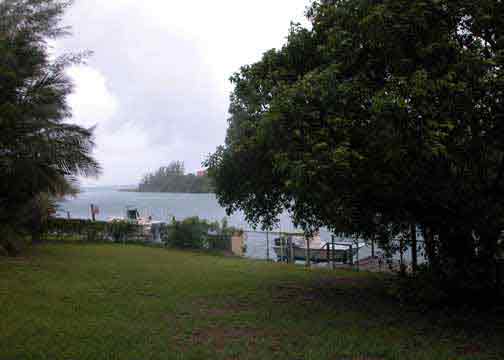 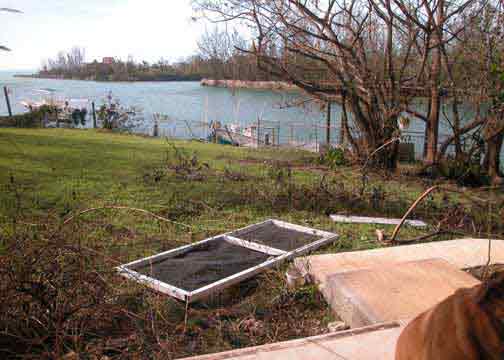 The back yard before Frances and after Jeanne. The water is a canal, which you can see opening at the ocean to the left. 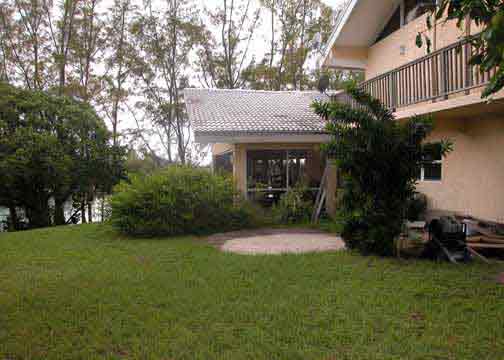 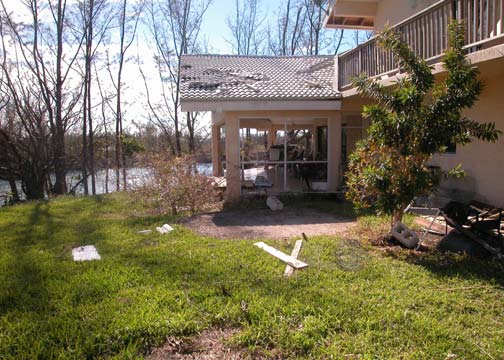 Before and after pics looking west (inland along the canal). The screen is the same one in the picture below. 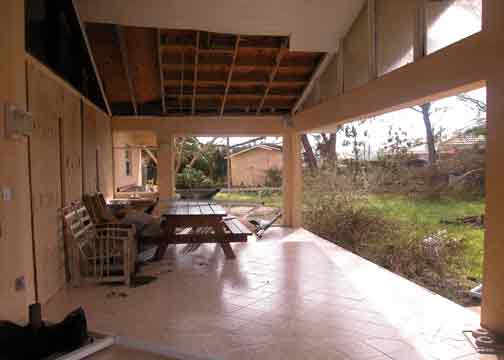 Well, at least one wall of the patio still has screens. 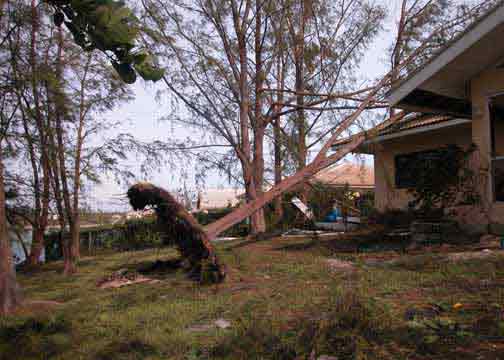 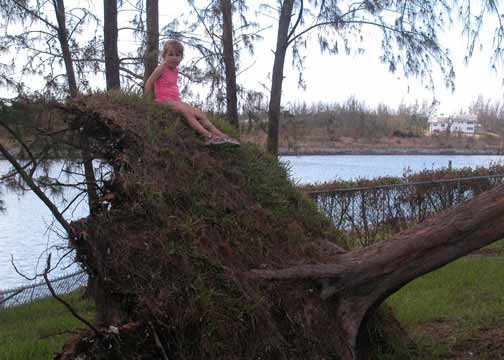 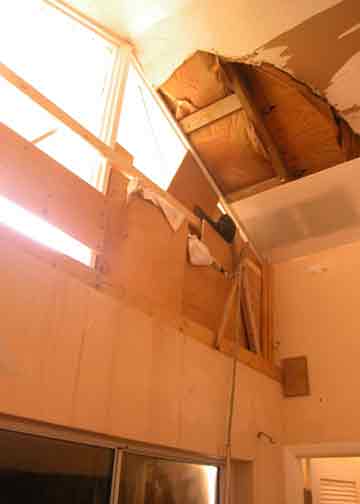 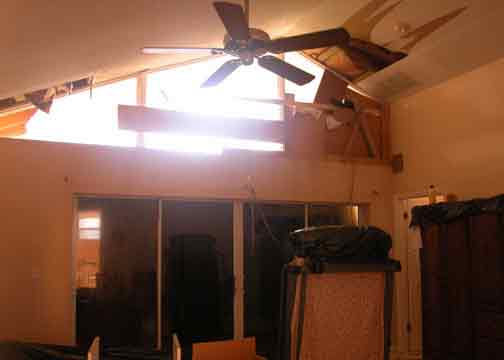 The inside of the bedroom after the roofline windows succumbed. These broke during Frances, while Don was inside the bedroom closet. The wind embedded glass in the opposite wall. Had the windows broken five seconds earlier, the glass would have been embedded in Don. 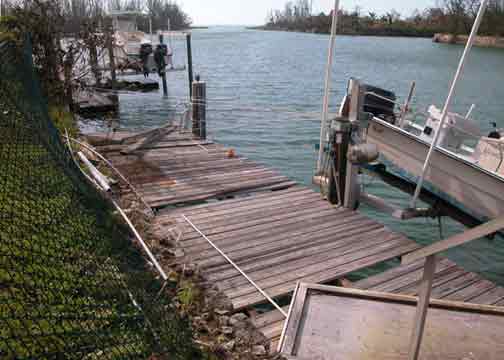 The dock is missing a few planks, but at least the skiff is still there. That's the canal entrance over yonder. The canal branch to the right is where the Dolphin Experience is. 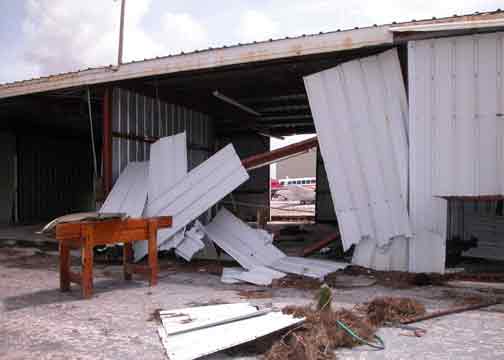 The hangar at the airport. 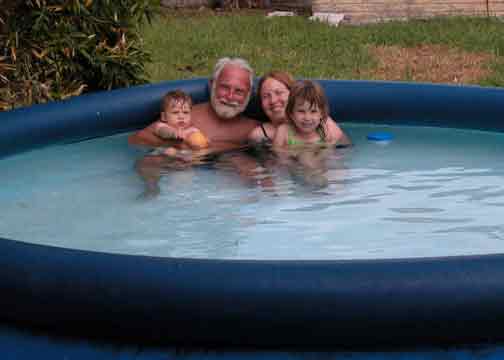 Jamie, Don, Tracy, and Amanda - after Frances and before Jeanne. 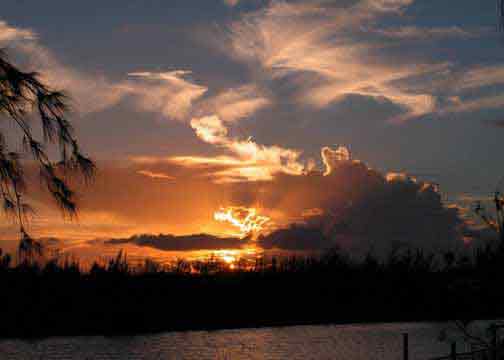