Even before Charles Lindbergh brought aviation to the front pages, Phil Marmelstein was an airplane enthusiast. He lived in sight of the Navy airbase at Mustin Field in Philadelphia and was deeply into building model planes as a kid. He shared his hobby and neighbourhood with future 101 Squadron pilot and close friend Coleman Goldstein, who lived a few doors down.

Before World War II, Phil Marmelstein was working as an apprentice machinist in his native Philadelphia, but his interest in aircraft had blossomed into a private pilot license, and he belonged to a local flying club. War broke out, and the short, skinny Marmelstein considered his options, figuring that he would eventually be drafted. He wondered about becoming a military pilot but didn't think he would pass muster, physically. He was startled to learn that one his classmates was accepted into Navy flight training.

To be a Navy pilot? You had to be tall, handsome, smart, well built - all the attributes of typical John Wayne, Hollywood kind of guy. And here, this guy was the same height as me and built only a little bit better and was accepted. (pers.comm)

The Navy's acceptance of his classmate encouraged Marmelstein to apply. As he had suspected he might, Marmelstein flunked the initial physical - he was underweight and his chest was too small. One of Marmelstein's friends at the flying club was a hobbyist weightlifter, and he gave Marmelstein an exercise program to follow. In four weeks, he gained 9 lbs and 2 1/2 inches on his chest. He was amazed, and so was the US Navy. At the subsequent physical, the Navy doctors went so far as to check the soles of Marmelstein's feet for hidden weights.

Once past the physical, Marmelstein excelled. His flying background helped him finish first in his class of 600 trainee pilots. He was assigned to be a trainer himself, and he wound up in Norman, Okla. as a primary flight instructor at NAS Norman. He served until November 1946, and afterward found work as a seaplane instructor in Philadelphia, alongside Goldstein. He also stayed active flying in the US Naval Reserve.

Marmelstein had grown up feeling that there had to be a place that Jews could call their own. Goldstein uncovered the Jewish effort to recruit airmen in early 1948. Goldstein told Marmelstein that he planned to volunteer, Marmelstein decided that he had to go, too. 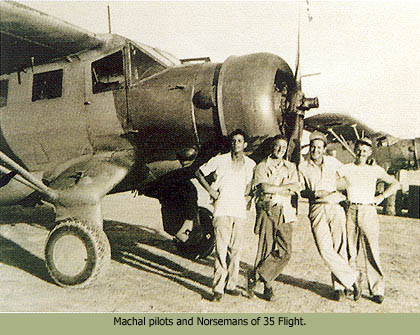 The two men traveled together to New York, then to Rome on a commercial TWA flight. From Rome, Marmelstein went to Paris, where his skills as a pilot instructor would come in handy. He was assigned to a group that had the task of collecting war-surplus Noorduyn Norsemans from Munich. Marmelstein flew these aircraft from Germany to Amsterdam, where mechanics gutted each Norseman and refitted it with a large internal fuel tank (from a C-47, Marmelstein suspects) in the cargo compartment so that it could make the flight across the Mediterranean to Palestine. The extra fuel allowed the Norseman to fly up to 13 hours non-stop. Marmelstein would exchange the surplus Norsemans he flew into Amsterdam for a completed modified aircraft which he would take to Paris. In Paris, Marmelstein trained aircrews to fly the modified Norsemans.

Marmelstein worked out of the Paris base until June 1948, when British pressure on the French authorities forced the operation to undertake a quick move to Czechoslovakia - via Nice and Strasbourg. Marmelstein thinks the group had meant to gather 20 Norsemans in Munich, but remembers a definite total of 11 coming out of that city.

The Norseman were a vital cog in the Israeli strategy. They were the only reasonably sized transports that could land at the short roughshod airstrips that served outlying settlements. The Norsemans of 35 Flight were the sole means of supply and communication for the potash works at S'dom (Sodom), at the south end of the Dead Sea. Four Norseman were assigned to the S'dom route. Able to maintain S'dom, Israel could claim it as an inherent piece of the country during the armistice talks and the border was drawn in part to reflect that.

Three weeks after I arrived (in Czechoslovakia), Sam Pomerance and I took one of the American trainers, a BT-13 (Consolidated-Vultee BT-13 Valiant), and he wanted to see what I could do when we first met. The most simple thing to demonstrate in any airplane is to do a wing-over. So I did a couple of wing-overs for him, so that he could see at what level I could fly the airplane. When the airplane is in a steep vertical bank, you're looking straight down at the ground. Now, I'm making a guess that I had been spotted from the ground, and they came back with the concept that I was an American spy. They would not permit me to fly in the country with the students. (pers.comm)

Grounded, Marmelstein was limited to classroom instruction, but given his depth of experience, the Israeli authorities made him the coordinator of mechanical training school and flight training school. Marmelstein roomed with Bill Schroeder for a few weeks, and remembers him as a pleasant man who was easy to get along with.

Marmelstein knew how to play violin and picked one up while in Czechoslovakia to help him pass the time.

Marmelstein crossed paths with 101 Squadron as a participant in the second Velveta ferry mission. He had flown from Czechoslovakia to Israel in a Norseman in late July, and his availability and experience led Sam Pomerance to ask him to fly one of this second batch of Spitfires to Israel. This was the only time the local Czechoslovakian authorities allowed Marmelstein to fly after grounding him. He recalls that the following pilots also took part in Velveta 2: Jack Cohen; Caesar Dangott; Moti Fein; Aaron Finkel; Sandy Jacobs; George Lichter; John McElroy; Sam Pomerance; Bill Pomerantz; Arnie Ruch; Bill Schroeder; Danny Shapira; and Lee Sinclair. (One more pilot remains anonymous for now.)

The pilots gathered and roomed in the town of Stare Mesto, Czechoslovakia near the Austrian border, and on Dec. 18, 1948, a first group of eight Velveta 2 Spitfires left from the nearby Kunovice airfield after a delay due to winter storms. Heavy cloud en route forced most of this first group to turn back, but Sam Pomerance decided, fatally, to brave the weather and to try to push on the destination, Niksic, Yugoslavia. He soon perished in a crash, due either to low visibility or hypoxia. Eight Spitfires completed the trip the next day, and a second group of seven, including Marmelstein (along with Cohen, Finkel, Jacobs, Schroeder, Sinclair, and the unknown pilot) followed Dec. 20. Marmelstein remembers playing his violin, which he had been able to stash in his empty Spitfire, during the stay in Yugoslavia.

Marmelstein describes the trip from Niksic to Israel as "very boring". He had experience with overwater flights in the Gulf of Mexico through his Navy training at Pensacola, Fla. and he had flown the route before, so he was used to flying over open water. There were two schools of thought on how to make the crossing. Some pilots relied on their compasses and dead reckoning to fly a straight line across the Mediterranean to Israel. With the experience of the Norseman crossing, Marmelstein helped plan and adopted a more reliable but longer strategy. He and the Velveta 2 pilots in his flight plotted a course from island to island, flying close enough to keep sight of the islands but far enough out to sea to avoid being spotted by observers on the ground. Although each flight of Spitfires started out as a group, slight variations in engine power among them led the aircraft to drift apart as the flight went on. The pilots preferred to fly that way to jockeying the throttle and boost which could have used up the fuel prematurely. During his group's Dec. 24 flight to Israel, Marmelstein did not see a transport escort such as the C-46 that guided the others across the open water the day before, and had there been one available, he would have preferred that it follow rather than lead, so that its crew could see any developing emergency and assist.

The Spitfires' intended destination was Ekron and most of the pilots, Marmelstein included, landed there. Marmelstein took his aircraft in with the slow nose-high approach he was known for among the other pilots. He had adopted the technique in the Navy while training for carrier landings.

At the end of 1948, Marmelstein was named an official flight instructor for the nascent air force and became Israel's first military-trained flight instructor. He later left training command and joined 69 Squadron, the squadron with Israel's three B-17s. In the squadron, he again flew a Norseman outfitted with the long-range fuel tank. This time, however, the tank was filled with insecticide for mosquito spraying. Marmelstein remembers spraying swamps in the Kordani area.

Marmelstein flew as a co-pilot in Operation Magic Carpet. In May 1949, the Imam of Yemen secretly agreed to let 45,000 Jews emigrate to Israel. Operation Magic Carpet was the secret air bridge that brought them in, roughly 380 flights in all. Marmelstein flew 93 Magic Carpet flights, and estimates that he ferried 10,000-11,000 immigrants. He only flew six or seven flights from Yemen; the bulk of his passengers were Iraqi immigrants picked up in Cyprus and Iranians who boarded in Tehran.

In February 1952, Marmelstein left the air force to join El Al. He flew with the airline for four months. Newly married, he returned to the US in June that year after a honeymoon in Europe. In the US, he worked in furniture manufacturing. To satisfy his aviation craving, Marmelstein returned to the Naval Reserve, where he flew the SNJ (naval Harvard), R5D (naval C-54 Skymaster), and SNB (naval Beechcraft Expeditor). His years of absence and, he suspects, politics kept him from promotion, but was able to continue flying duties.

Click the badge to return to the squadron roster